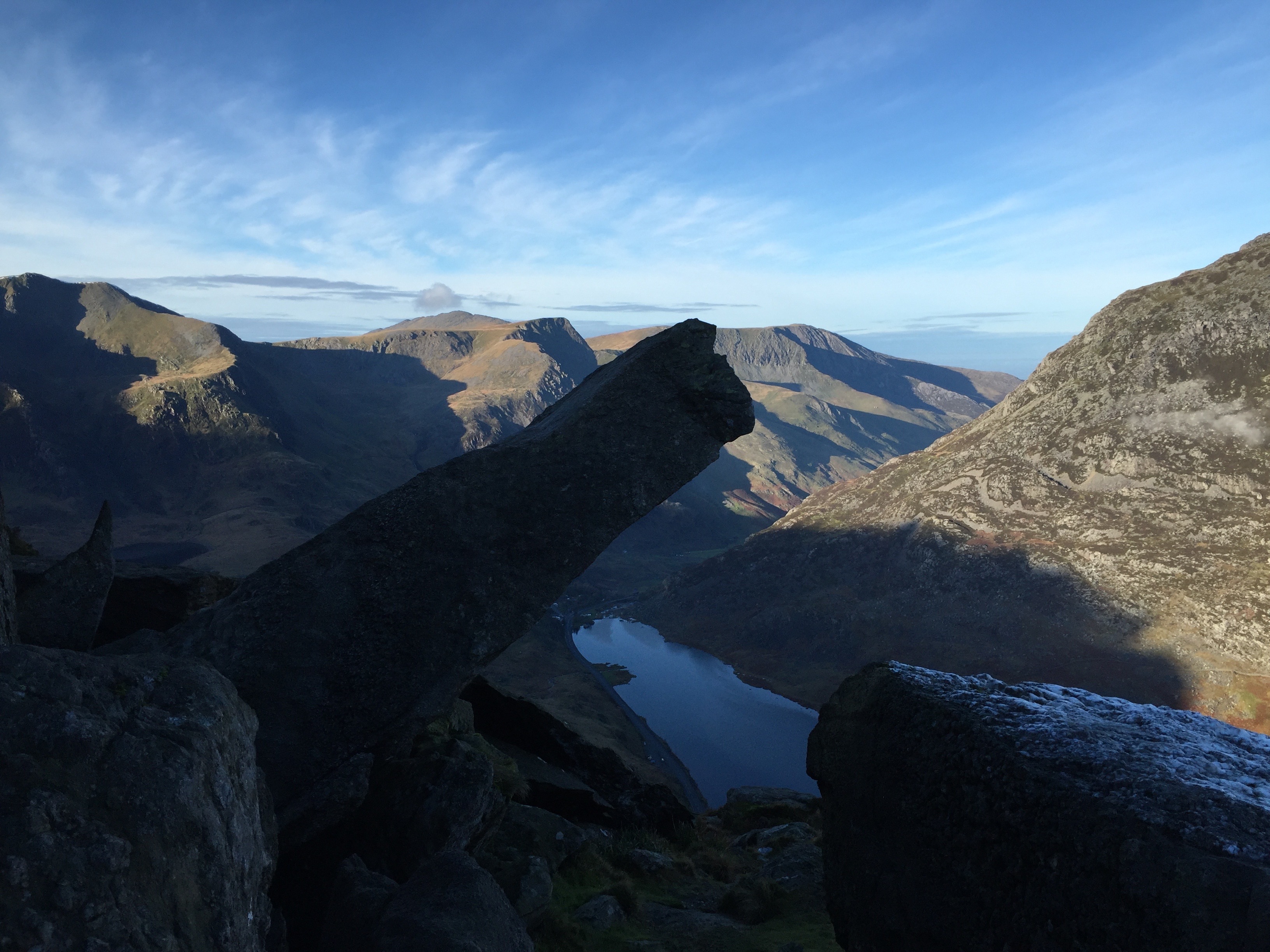 915m (3,002ft) Tryfan is one of Snowdonia’s most iconic (sorry) and characterful mountains, a sheer-flanked fin of rock standing above the A5 and Llyn Ogwen in the deep Nant Ffrancon valley and clear to the north of its Glyderau mother-massif.

The scramble up and over its length is one of Snowdonia’s – and Britain’s – most exciting expeditions, but is only for the fit and confident. It is not as exposed as Crib Goch, but it is not for those who struggle with exposure.

This is a proper scramble up a long, steep, rough path from the north-west just by the famous climber-magnet of the Milestone Buttresses (or indeed from the road just to the east of Llyn Ogwen) and then up the rising ridge of the fin-top itself, all requiring care, followed by an exposed walk across the crest with its three peaks, followed by a tricky descent to the Far South Peak and the Bwlch Tryfan pass which separates Tryfan from the main Glyderau ridge.

The Heather Terrace is a fault in the sheer eastern cliffs, which angles down towards the valley bottom and is a visual and spiritual tonic and creates a satisfying circuit. It has to be said, it is a rough and at times slightly tedious sub-scramble; the terrace is wide and rock-strewn, so you don’t get the drama (or exposure) that accompany some of the best terrace or balcony walks. But it is still a fine walk, and gorgeous on a good day.

You can climb the Heather Terrace, the less-arduous way to do it, starting with a steep but beautiful approach climb from the A5 east of Llyn Ogwen. From above the pass between main Tryfan and the Far South Peak, you can turn eastward down a steep gulley touring off (left) onto its rather indistinct beginning, to descend it.

From the Bwlch Tryfan pass behind Tryfan, you can head in various directions:

You can climb the stunning but very exposed scramble up Bristly Ridge to 994m Glyder Fach;

Head further east to climb the Miner’s Track (there are more than one in Snowdonia!) to the wide grassy plain between Glyder Fach and Y Foel Goch and then on along a choice of paths; or

Turn west into beautiful Cwn Bochlwyd to descend to its lakelet and then drop back to the A5 at the western end of Llyn Ogwen. You can join these two roadheads by walking beside the A5 for 2km, which is a bit tedious – but you can halve the distance by taking the right-hand (initially indistinct) path shortly before the fords at the foot of the upper lake, to descend steeply to the main road halfway along the lake.

This multitude of options means a wide selection of opportunities, in particular:

Climb the summit ridge, then descend on the Heather Terrace or west into Cwm Bochlwyd.

Climb the Heather Terrace, and either return by it (masochists) or descend west into Cwm Bochlwyd.

See our Snowdonia page for more ideas and helpful practical information, photos, and any risks to consider. 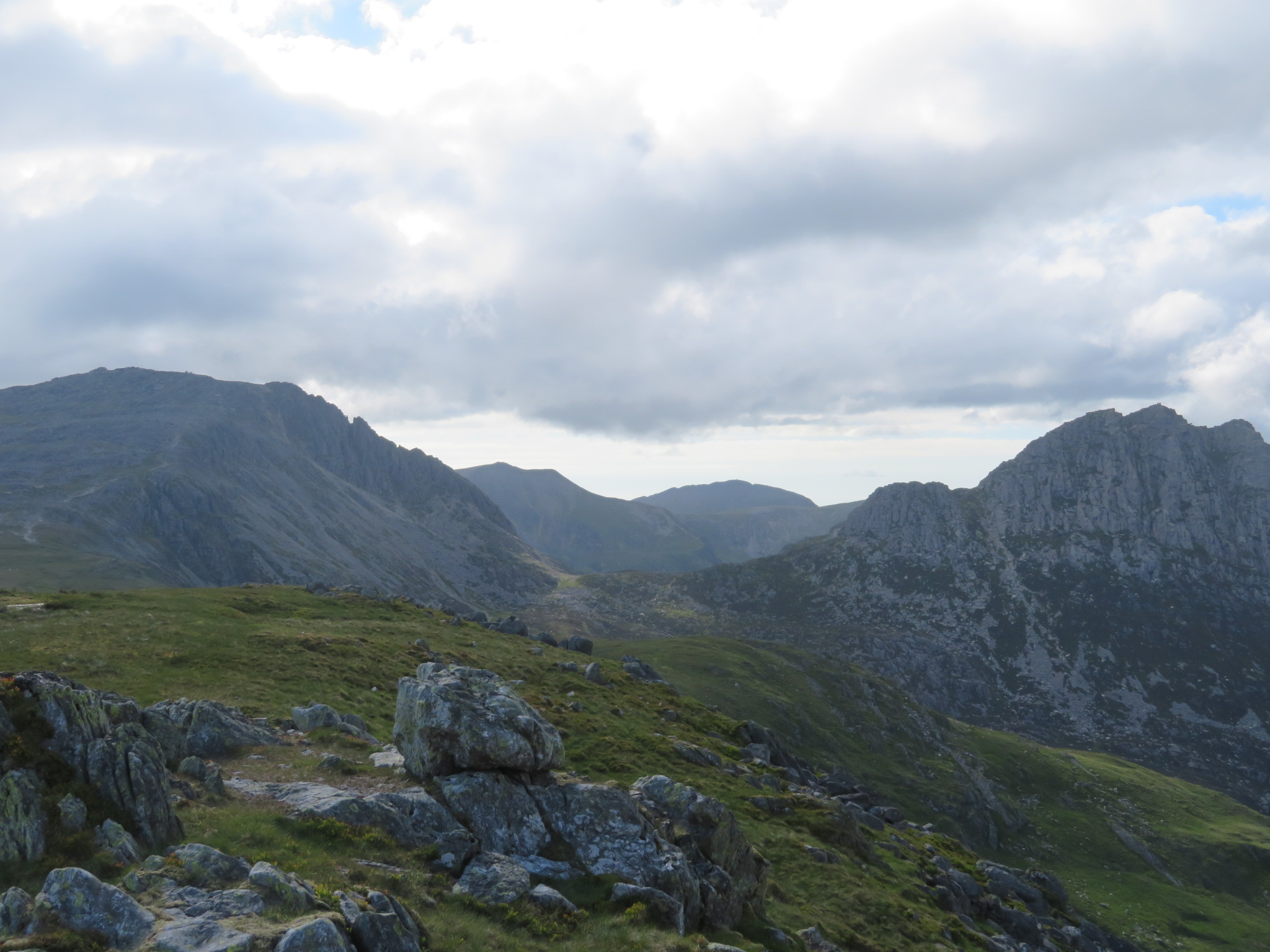 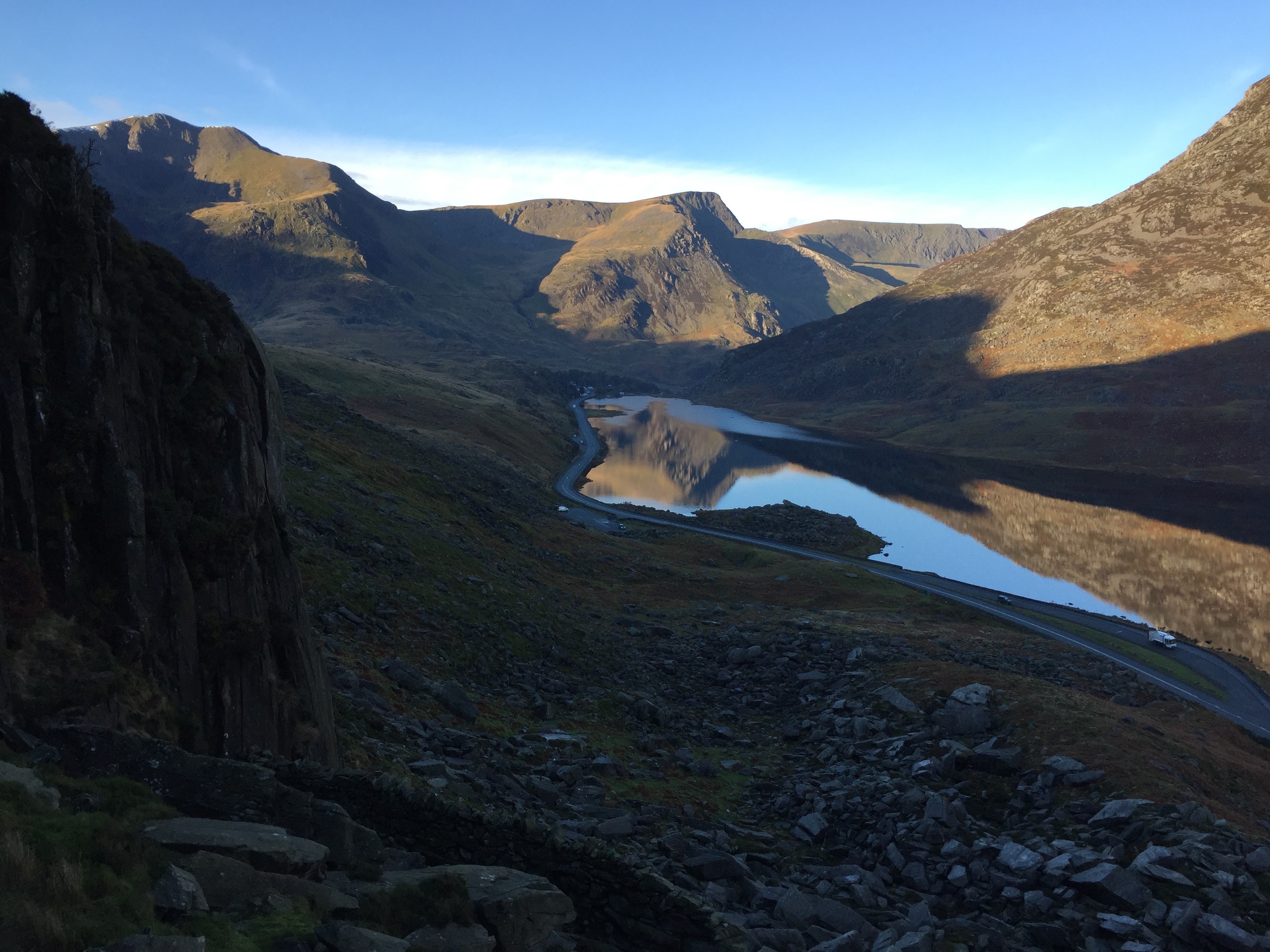