The following is Maureen Nisbet's piece on walking here, which was an entry we much enjoyed for our 2011 Travel Writing Competition. Thank you, Maureen, for bringing this walk to our attention!

The journey started at 'Crimdon Dene' cliff top Caravan Park, as the last greying shadows of night melted into the glowing sky. Rabbits paused, motionless like rocks; their noses twitched the scent of my dogs before scuttling off to safety. Silver spiders' webs twanged to the dawn symphony like jewelled harps. Pied wagtails skiddled across the dewy ground. A short walk round Limekiln Gill, where martins darted from their nests to snatch insects in flight. Greenery stretched in three directions, the sea in the east. Landscape rolled out like a roller coaster with deep dips and gorges.

The path ran southwards, a railway track skirted alongside cutting a line through the scenery. I looked down across treetops, varying shades of green; some blushed with the first hints of autumn. I was on top of the world. An old coal pit, now silent heath land, strewn with wild flowers and insects.

"Clickity-clack, clickity-clack." A train rushed past, this was real, not a ghost from the industrial past, now carting people instead of coal. The train shot across the viaduct and escaped into the hills, peace resumed. The path came to an end at a vertical, six foot high rock face, as if someone had dumped a large boulder there, the path continued above. A youth wearing Daz white trainers sprinted past leapt up and slowly slid down into a muddy puddle, sheepishly he climbed the foot holds on one side. I remained on the lower level path.

To the right was a wooden sleeper step with some branches from a bush trying to hide what lay beyond. I pushed them back to reveal a steep stair way of sleeper-steps. The dogs ran in front sniffing excitedly. Birds called out encouragement, their song faded as I went deeper into another tranquil world. A ravine with grass sides, trees and plants, sheltered from breeze. Bees hummed, butterflies flitted from plant to plant. An abundance of Rockroses, the only food the rare Durham Argus butterfly caterpillars eat, unfortunately it was too late in the year to see the Argus, but other butterflies enjoyed the September fruits, especially juicy blackberries.

The path continued as a bridge, an ideal viewing platform to look down over a stream snaking around tree roots on its way to the sea. Across the bridge steps, with a handrail, led up through a canopy of trees. The path emerged amongst a mass of yellow gorse growing on black ground. The narrow track had a couple of styles through the gorse field, leading to the cliff edge overlooking the North Sea. A hundred feet below were Blackhall caves.

I'd been to the top of the world, the bottom of the world and now I was on the edge of the world. Deadman's Bank; where the finale of "Get Carter," was filmed, the part where the gangster is disposed of from a conveyor into the sea. No sign of colliery works or the conveyor which dumped coal slack and slurry to blacken the sea.

In the now crystal sea, a grey shadow erupted, nodded and submerged into the foam, two more porpoise joined in the fun.

The path continued along the cliff top to a car park. A couple joined me on the bench.

"Arlreet marra," the man greeted. "Bloody hell-this used to be black, the land, there weren't a beach, the water all inky black!"

"Eee, Pet, someone's coloured it all in!" She announced. "It's so pretty now."

She was right. The drab industrial Northeast has received a lick of paint. The sea is slowly washing away the coal dust and Mother Nature reclaiming the land.

"The machinery, the clanks, people scurrying like ants, shouting and the choking dust, all gone." He smiled.

We listen to the surf crashing on the rocks, gulls screech, crows cackle, another sign that fish and wild life have returned to the previously unsustainable sea. A murmuration of starlings pepper the sky with an acrobatic air display.

"Nature's play ground, the birds showing us their joy." The woman said as they left.

Stone steps lead down a hundred feet to the beach. There seems to be steps, lots of steps everywhere. I wonder who built them. Wish they'd left the old conveyor belt and converted it into a ski lift for tourists. Yet the noise would deter the wild life and be a backward step to the old industrial days, so up and down we have to climb.

The caves are more like domed cellar rooms, the roof studded with coal and the floor black dust. There are some double-decker caves, used by smugglers many years ago to hide their contraband.

The magnesium limestone cliffs and rocks still contain small fragments of coal. Scrambling over various coloured rocks, pink, brown, white, cream, grey and black, you pass more stone stairways, you don't have to worry about being cut off by the tide there is always a stairway nearby. The cliff rolls into sand dunes, and the rocks give way to golden sand rippled with coal dust. The dunes lead up to riding stables, backed by fields. Further along the beach, a small area is fenced off for breading little terns. Behind the dunes, where a few days ago lay a stone dry riverbed, now, after some night rain, swirls water from the hills through the valleys and into the sea. The dogs wade in and drink the fresh water. We follow the river through park land, a couple of bridges cross the river to woodland, and more steps leading back to the Dene. In the park the path passes under a looming viaduct towering above everything. Emerging from the park we are back at the caravan site. A two-mile round trip, plus unknown mileage up and down steps, a short distance with an abundance of wild life and natural beauty; so allow plenty of time and patience to enjoy it all. 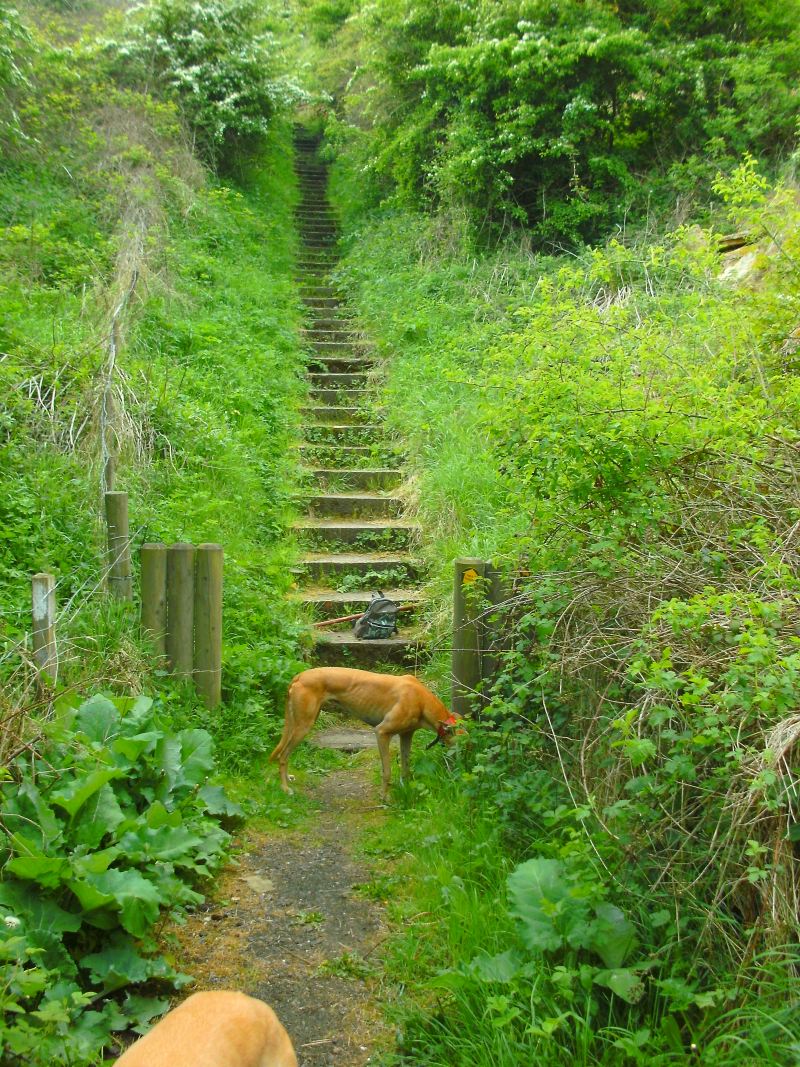 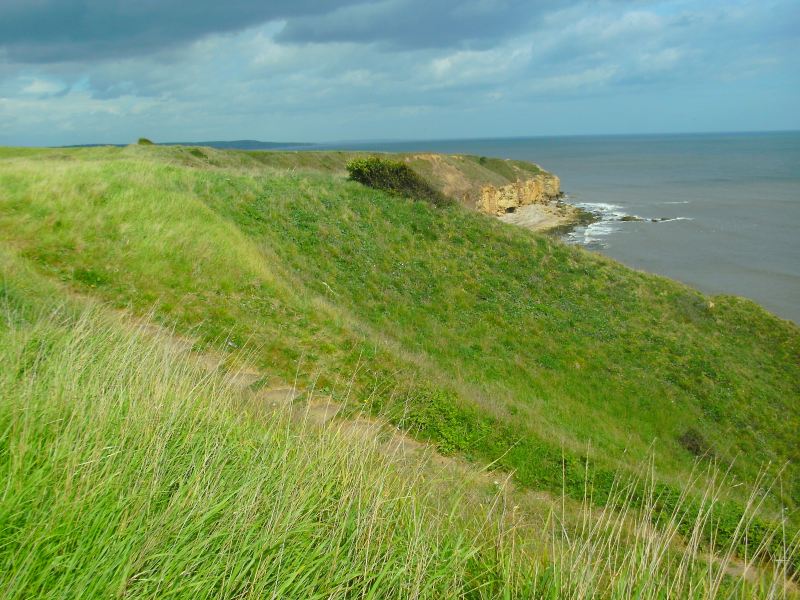