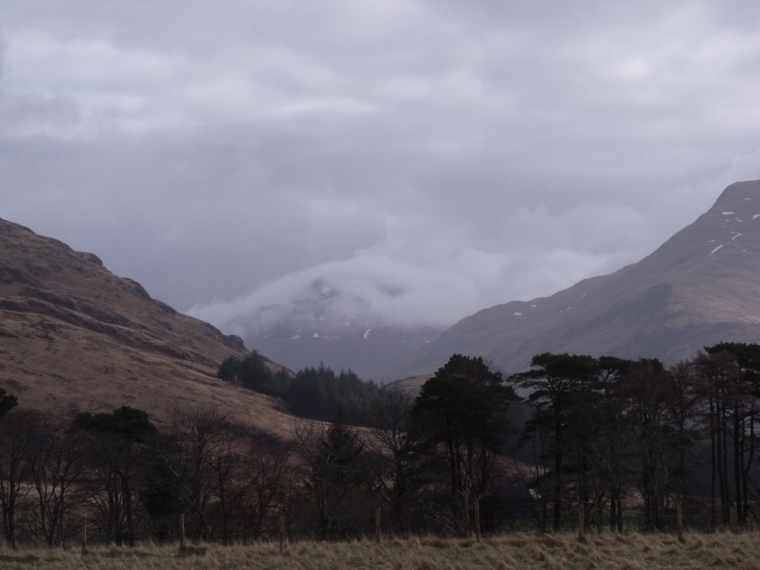 The following is Christopher Suckling's piece on walking here, which was on our shortlist for our 2011 Travel Writing Competition. Thank you, Christopher, for bringing this walk to our attention!

It is sometimes difficult to know exactly when or where a journey starts, like an idea, or a dream. Was it that first morning, when Euan stretched out his hand and helped me across the wobbly board to the quayside - no joking in his eyes for once? Was it earlier than that, weeks earlier, when I spread the OS map out on the living room floor? Cars passing on King's Avenue outside. I could hear it had been raining. I ran my finger over the route at a constant speed, traversing mountain and marsh as easily as any gull or cloud. Or was it long, long before that, when I was only a child, when Mum and Dad would take Kate and I to the Peaks? Every Saturday it seemed: Lathkill Dale, Rushup Edge, Ladybower Reservoir. I would complain in the car, but once I had my boots on and was out on the path, I would run along, searching for adventure or a good stick.

Whatever the moment, I first realised it had started a mile on from the quayside at Inverie where the surf foamed beneath a row of squat white buildings. We stopped by a gate, leaned our packs against it and watched the sheep whilst we relieved ourselves through the fence, steaming and giggling. Afterwards, we took off the extra layers that we had thought would be necessary when we kitted up that morning in Mallaig. I remembered something Dad had once told me and relayed it to my friends - such was my personality, perhaps even my role. He had told me that cowboys used to carry a saddlebag full of things which they called 'possibles'. These were individual collections of odds and pieces that they thought might come in handy. I felt the weight of my pack against my collar bone and wondered whether we had chosen our possibles ingeniously or ingenuously. Euan offered me a mint.

Apart from myself, there was Euan and Jamie. We had trained as teachers together but knew each other as people not professionals - friends, not colleagues.

Jamie had initiated things: he had booked two tickets on the Caledonian Sleeper months before, unable to resist a bargain, and offered me the spare berth. Euan wanted in, booked a flight to Glasgow and suggested Knoydart for our hike. I did some research, knowing nothing of the West Coast that wasn't in Kidnapped and planned a route. We would walk from Inverie to Glenfinnan and it would take three days. If the journey had a purpose, it was understood but not articulated. Some people call it 'getting away' but that doesn't quite do justice to the sense of going somewhere and being somewhere that is unavoidable. Maybe our mission was the same as Darwin's when he boarded the Beagle: to harvest experience and understanding from the landscape. I was there to collect stories, perspective and perhaps relief and to bring them home for posterity.

Now, my mind is full of memories of our trip, like a drawer of muddled jumpers; however, there is not time to speak of them all so I will pull out the part of the journey I most often return to in my mind: our arrival at Sourlies bothy.

Around four o'clock on the first day, we reached a rope bridge and an accompanying sign that read, "WARNING. Bridge in dangerous condition - users do so at own risk." Looking back, I wonder who had left such a sign out in the wild. Who could you hold responsible for any misfortune you suffered there other than yourself or your god? Nevertheless, it offered us some boisterous excitement. We had just completed our first small ascent and descent with packs and were quietly alarmed by how much of a strain it was, gazing in wonder at the lumpy head of tomorrow's monolithic goal, Sgurr Na Ciche.

It is difficult to describe if you have never seen anything like it. The land was in pieces, each one no bigger than a bath tub, all of them irregular in shape and spongey underfoot. Between each piece of land was a gap, none wider than a good stride, in the bottom of which could be often be found mud, silt or a stream; however, sometimes we discovered the carcass of a sheep, rubbish, driftwood and on one occasion a deflated football, which we thumped around for a while. We conjectured that it had been formed by the tidal loch that we could see half a mile ahead of us and the mountain streams that carved wrinkles into the walls of the valley. As we approached Loch Nevis, we saw that it obtruded up to our right and the ground underfoot was covered by a thin film of water, which encouraged tiny yellow flowers and great reeds to grow around us and left Euan and I praising our gaiters and laughing cruelly at tiptoeing Jamie's lack thereof.

A cluster of native deer had flanked us on both sides as we approached them, splitting the herd between the hillside and the edge of the loch. Suddenly, the loch deer kicked and ran, trying to link up with the proud stag on the higher ground. They seemed to be running on water. We said nothing. Our hands did not stray to our cameras. This was for us alone: a photo wouldn't do it justice and the experience bound us together.

We followed the deer to Sourlies bothy, where we pitched our tents by the edge of the loch. It was quite safe: the tide was in. I found a large shell, white like chalk, the size of my palm, which now lives on the windowsill at home with a rock in the shape of a rabbit's head, two feathers and a fossil.

Cloud came up the valley, bringing the gloom with it whilst we sat on a rudimentary bench under the eaves of the bothy roof, listening to light rain running down the corrugated iron and dripping onto our perfect positioned toecaps, and watching the tide retreat. I can't remember what we talked about, Jamie's choice of rations perhaps, the deer, tomorrow's ominous prospect but we were soon foraging for mussels, competing against one another for quantity and size. Whoever won, no matter, we all enjoyed our catch back under the eaves of the bothy. We laughed at ourselves. Who would have predicted this? Euan predicted a bad stomach the next day but he was wrong.

Later, after brushing my teeth in a stream under the shadow of the great Monro, anxious about tomorrow's ascent, I came face to face with the stag from the hillside, grazing behind the bothy. You might expect him to have noticed me and ran but I was either invisible or insignificant in his eyes. He did not look at me once. He would not remember me as I often do him, my heart lifting and calm descending.

The loch, the low cloud and my journey continued beyond the stag, stretching out into an impenetrable blur. 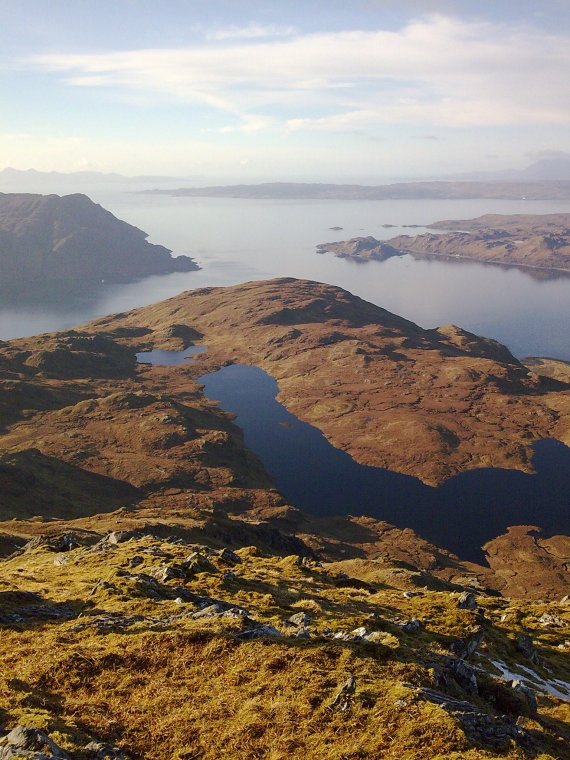 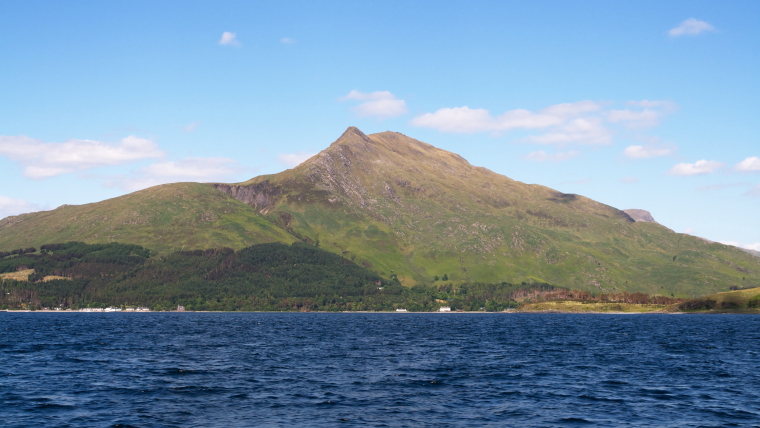 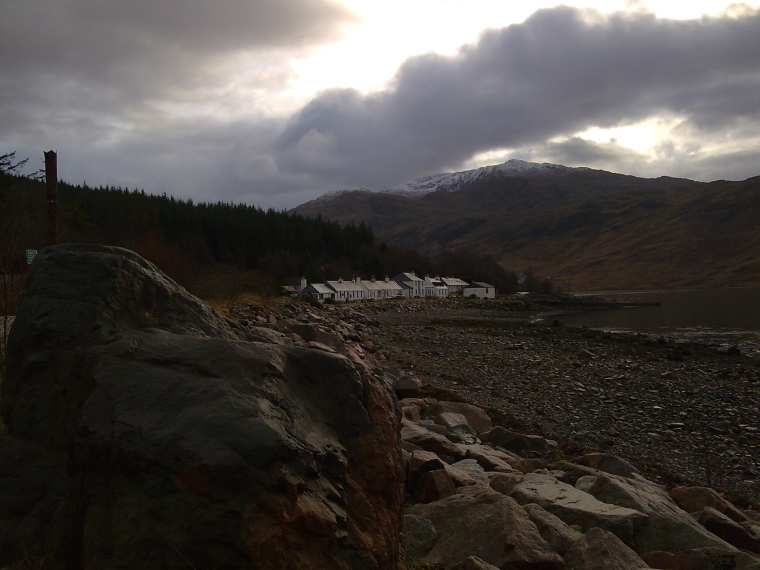