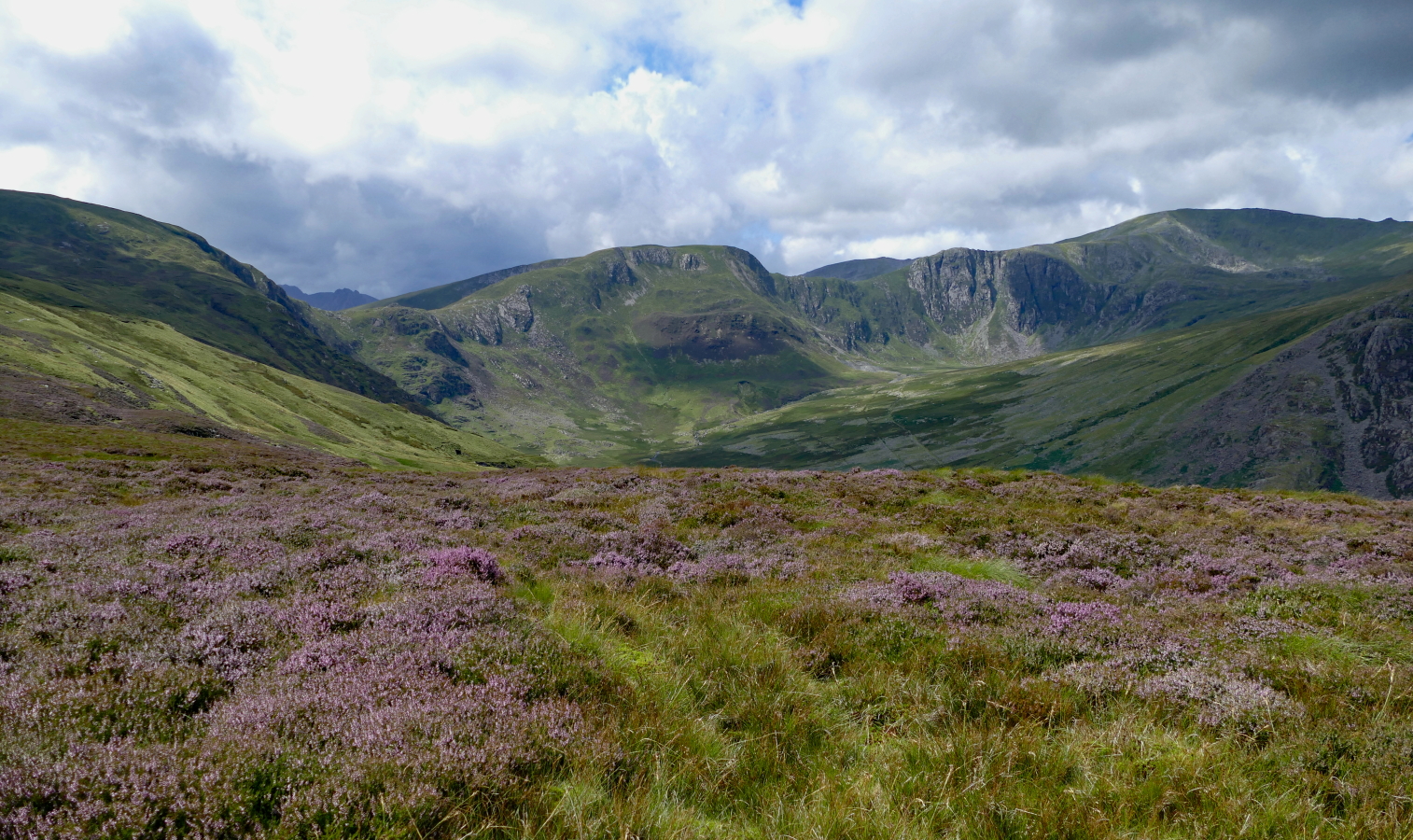 Much of the northern Carneddau group has a decidedly different feel from Snowdonia’s high central mountains: grassy, rounded, big hills rather than mountains.  But then you meet the vast cliffs and corries and their heart and southern end, and discover some of Snowdonia’s finest walking – and they are generally emptier too. Here, their rounded rocky tops and high, surprisingly level ridges, eaten into from all sides by the glacially gouged cirques and cliffs, remind people of Scotland’s Cairngorms. The Carneddau have nearly as many 3,000-footers as the rest of Snowdonia combined.

The southern heart of the Carneddau is a series of interconnected ridges, with gaping cwms scooped and ground into their sides. They enable a variety of high-level ridge-tours to be made, picking off several peaks in one long walk. The great walks described below all climb into this same tremendous high southern group: all three summit Carnedd Llewelyn, the Carneddau’s highest peak at 1,064m; Carnedd Dafydd (1,044m) and Pen Yr Helgi Du are each reached by two walks.

You can make numerous shorter walks in the Carneddau, but the great walks into the heart/south of the Carneddau are the following.

From the east: around Cwm Eigiaue

Accessing two of the 3,000 footers, Carnedd Llewelyn and Foel Grach, from the Conwy valley to the east, walking the high ridges around the head of the tremendous but less-visited Cwm Eigiau cirque. The ridges around the south of the cirque are the most exciting, with Pen yr Helgi Du at their heart. From Carnedd Llewelyn, the ridges get wider but the walking remains gorgeous, north to Foel Grach then swinging east to descend slowly back to the roadhead. A demanding 16km, 6-7 hr walk.

From the west: around Cwm Llafar

The Llafar valley south-east of Bethesda  heads straight into the hills to end in a thrilling cirque, Cwm Llafar, below the huge and forbidding cliffs north of Carnedd Dafydd. This walk again circles the ridges above the cwm, bagging three major summits as it goes.

Start by climbing the long, grassy, in places steep, Mynedd Du ridge to the south-west of the cwm, on small and sometimes indistinct paths, to gain the high ground and work up through boulders to the summit of Carnedd Dafydd.

The walk east from here on the stony ridge high above the great cliffs, now of two cwms, is really exciting as you curve round north to Carnedd Llewelyn, the high point at 1,064m.

Then it is westish to drop and climb back to dramatic Yr Elen, approached on a narrow ridge above thrillingly sheer cliffs to the north. Then it is a long descent of scree then grass back to your start. A stunner. 16km, 6hrs.

Circuit from the south: around Cwm Lloer

This superb circuit climbs from near the head of Llyn Ogwen lake straight up the hillside besides the Lloer stream to the base of the classic cirque of Cwm Lloer, then turns west to climb (scramble in places) a steep ridge to the flattish top of Pen yr Ole Wen. Turn north to follow the rocky, barren ridge to Carnedd Dafydd, which is poised between two huge cirques, then make a long swing around an at times narrow and always spectacular ridge, to even rougher Carnedd Llewelyn the Carneddaus' highest peak at 1,064m. Thence more fabulous ridge walking, including a scrambled descent and narrow ridge, south to the base of the high Pen Yr Helgi Du ridge and a back to the deep Ogwen valley. 16km, 6-7.5hrs, of amazing walking. See more.

There are several ways you can make a traverse of the Carneddau combining parts of these routes to make a long, exciting day. Just study the map and salivate. But you would need to sort transport at each end.

A reasonable head for heights is needed on some of these trails, but they are not dangerous or highly exposed trails on a clearish day.

This is demanding walking in mountains with uncertain weather. Come fully prepared, and consider whether tackling them is sensible in poor conditions.

These walks are well written up in the Cicerone book.

See our Snowdonia page for helpful practical information, photos ideas and any risks to consider. 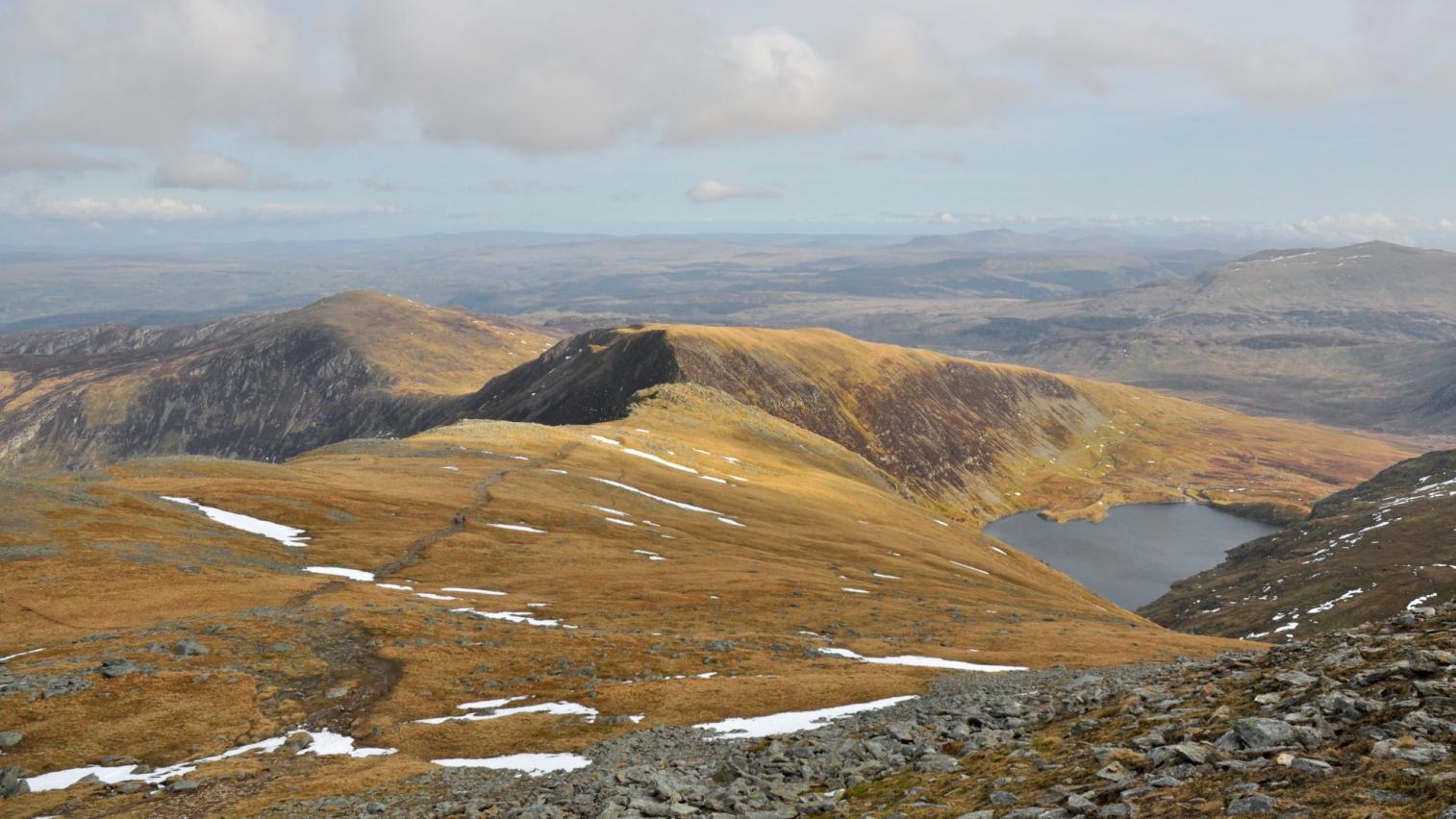 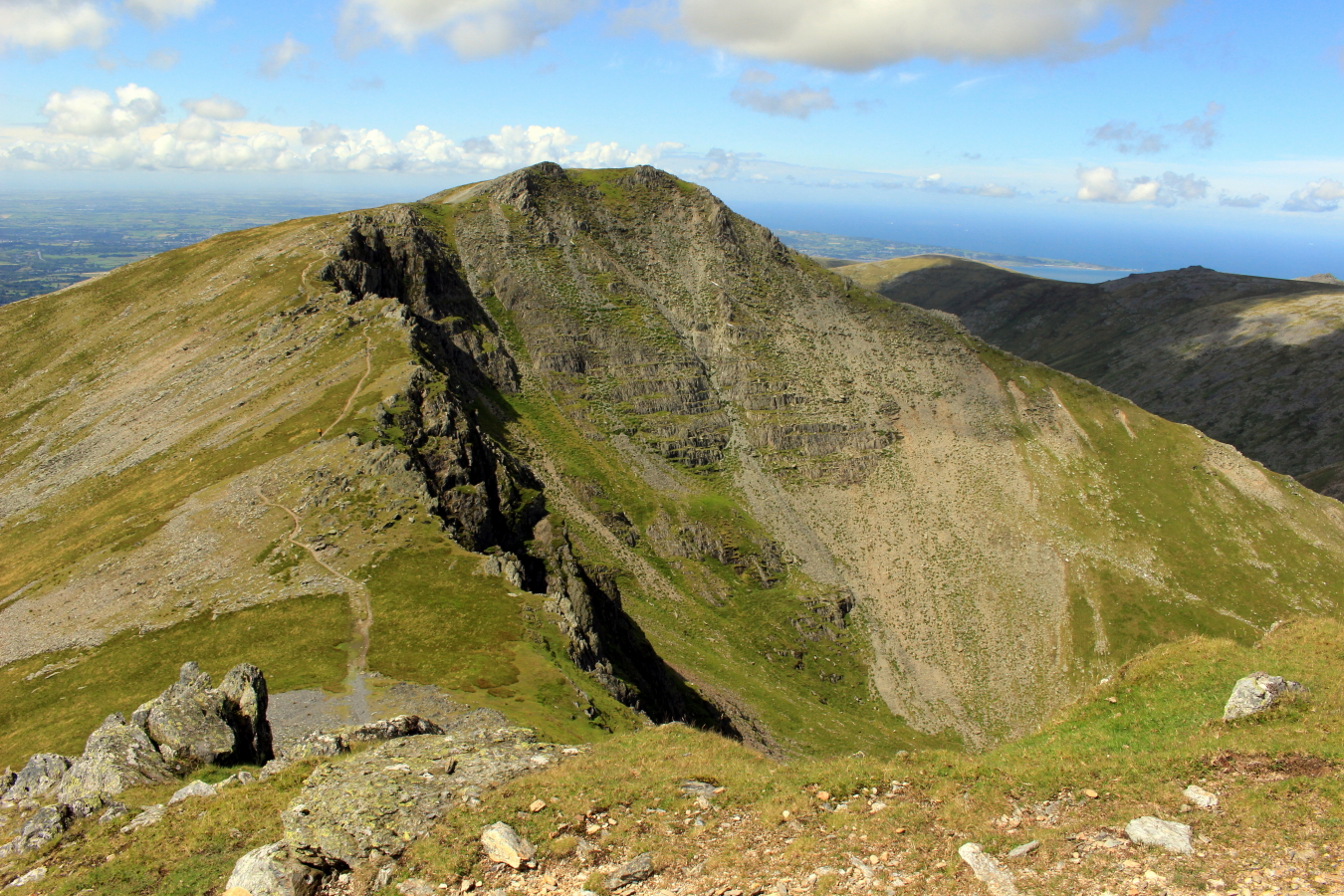 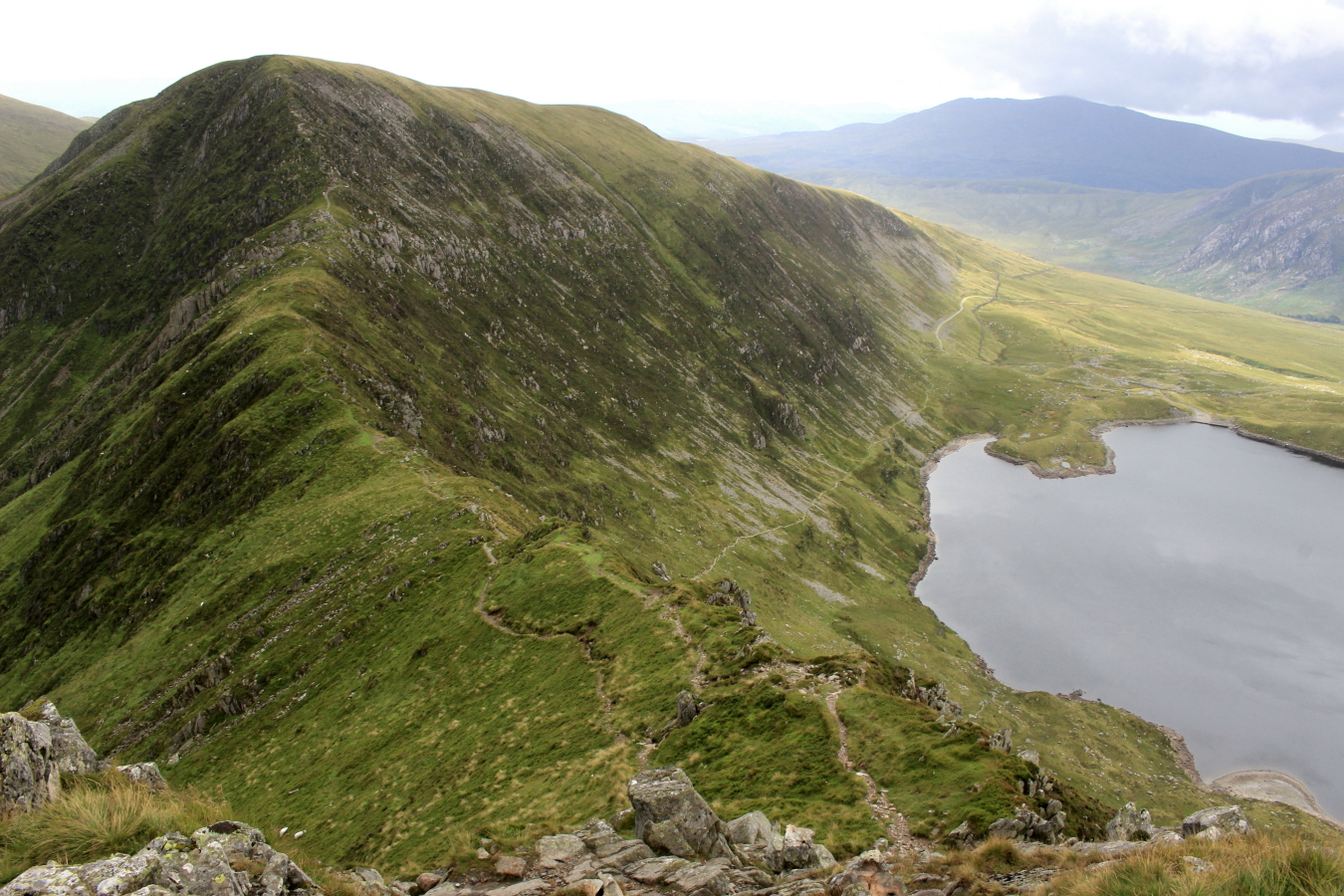