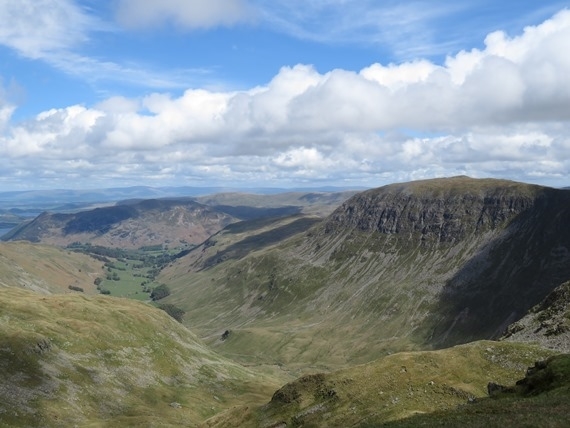 The third-highest mountain in the Lakes and indeed England. A mountain of two halves. The west consists mainly of steep, grassy slopes.It is the east side's glacially scoured scenery that makes it famous, with sharp ridges (aretes) separating deep coves. Lovely Red Tarn sits in one, and streams burble out of them all. Soft woodland, foaming streams and waterfalls and sheep-studded fields grace the lower slopes.

There are many routes up Helvellyn:

Directly up its long western slopes above Thirlmere, which are steep and craggy at first, then grassy and not specially thrilling. It has to be said, Helvellyn would be a dull mountain were its western side the only aspect: steep grassy slopes persist, and it is a long, unvaried slog to the summit ridge from the deep valley below.

Along the ridge from Dollywaggon Pike the southern extremity of the Helvellyn ridge, to which you can get from meltingly pretty Grisedale to the east, or up Tongue Gill from Goody Bridge near Grasmere. This is one lovely valley, climbing north-east between the steep slopes of Great Rigg and Fairfield to the east and Seat Sandal to the north. It is particularly fine in Spring, when whole hillsides of tawny old bracken which light up when the sun comes out. High up there are waterfalls below the Hause Gap ridge. Then it is the quiet sheet of Grisedale Tarn in its perfect bowl between three hills, with views toward Grisedale and the Ullswater hills beyond its foot. Dollywagon Pike is Walkopedia's favourite among a host of contenders for Most Eccentrically Named Hill. This is an steady climb on a well maintained path Reaching the summit ridge is a gasp-inducing moment: there before you is the full panoply of the north-east fells: St Sunday Crag next door, the High Street ridge looming beyond the fells by the pewter sheen of Ullswater. Far below are the wild upper reaches of Grisedale. Then it is on up the western flank of the long Helvellyn summit ridge, traversing below the peaks of Dollywagon, High Crag and Nethermost Pike. An easy walk made glorious by the views north and west.

Along the ridge from the north. Again, you can get to this from both west and east. Some fine high-level walking and an exciting narrow ridge from south of Raise.

Famous Striding Edge, running east from Helvellyn, is an unforgettably exciting knife-sharp serrated ridge which requires some scrambling and claims a life a year, very exposed in places but not that dangerous in reasonable weather. There are lower paths around the towers for those feeling a bit chicken, as we're afraid Walkopedia did. The views and atmosphere are nothing short of ecstatic, the odd gut-wrench aside. Far below, the blue waters of Red Tarn lie quietly below Swirral Edge and the wonderfully named Catseye Cam. Some 1,500ft. below are the Glenridding valley and, on the southern side of the knife-edge, the upper end of Grisedale.

Most people climb the ridge rather than descend. The descent to Striding Edge is fine, steep but not dangerous.

Lower down the ridge, the views over upper Grisedale are unforgettably pretty: below the wild upper Grisedale Forest, the bright fields in their orderly walls begin, hemmed in by rough grass and rock on the slopes above.

There are various books with sections on this walk, including the excellent Cicerone, whose home is in the Lakes. Find relevant books on Amazon:

This is a tough walking in mountains with treacherous weather. Come prepared, be ready to improvise. Some of the Lakes' most beautiful light is on showery, broken cloudy days, so don?t be disheartened by a mixed forecast!

This is an account of my crossing in May 2016 from Grasemere to Patterdale, as a diversion from the Coast to Coast.

Today was always going to be a lovely day’s walking, but becomes a marvel, as the weather allows us to divert to Helvellyn and Striding Edge. It didn’t appear thus when we peered out of the window first thing: glistening paths and the beginning of a shower.

After paying our respects to Wordsworth’s grave and Grasmere’s decidedly unusual church, we take the back road via Goody Bridge..... 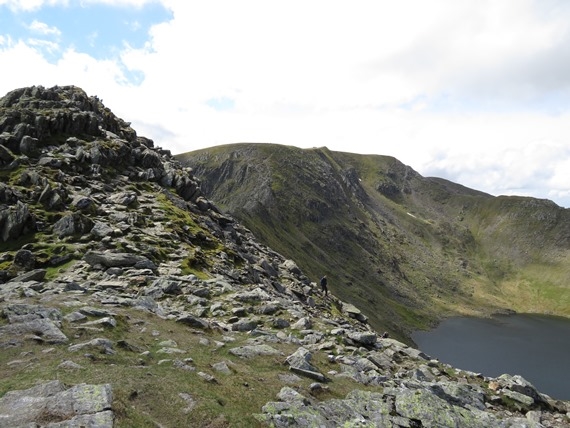 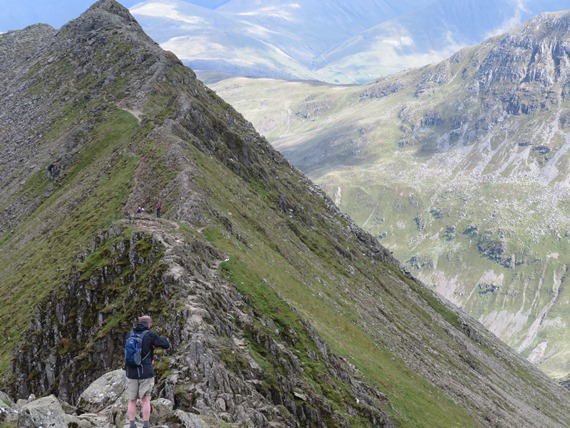 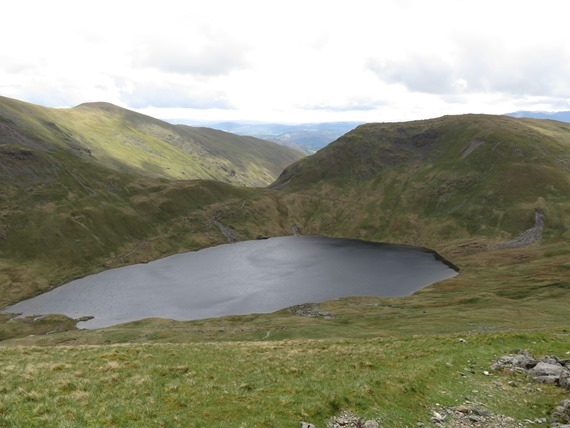