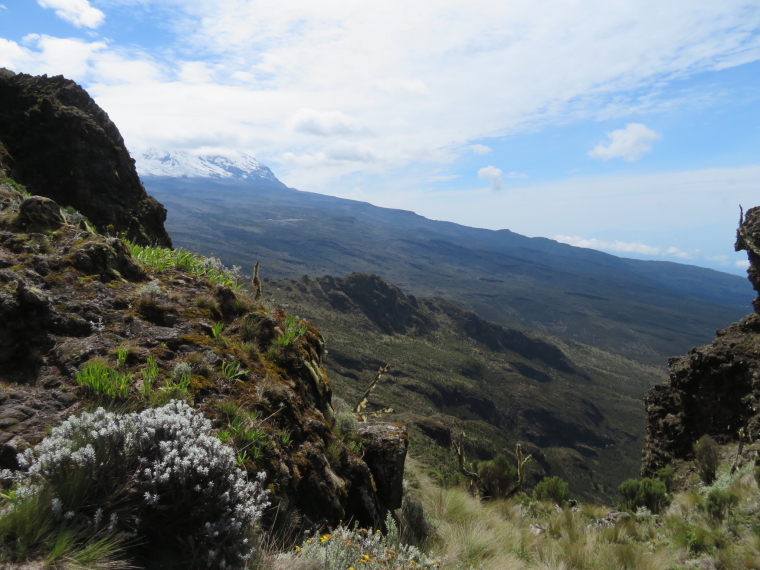 The best day walk on the highest mountain in Africa?

The Shira Cathedral is a short ridge-summit high on the southern rim of the Shira caldera, the remains of the first volcano of the massif, which must once have rivalled the subsequent Kibo (now the famous glaciated main peak) in size, but which collapsed in on itself, with later ash and lava flows from Kibo filling the chasm to leave the strange flats we see now and overwhelming its north-eastern rim.

Climbing here is a diversion from the direct track between Shira 1 and 2 camps, from which you are likely to start the walk: either way you will have a gorgeous walk across the plateau. This is an excellent acclimatisation side-walk from an ascent of the Lemosho and Shira routes.

From Shira 1, you head straight towards Kibo, normally with a constant stream of porters flowing past, gradually climbing on a good path which winds through vivid, ravishing shrub-land, widely spaced to aid appreciation of each individual specimen.

Turn right onto a cycle path, of all things, a wondrously smooth trail across the upper basin. Beyond a wide area of rough grass, you reach a belt of shapely heather clumps at the foot of the Cathedral. (It took us three hours to cross a long radius of this vast oval bowl.)

Climb the lower slopes to a narrow col where you meet your first (if from Shira 1) view along the southern slopes of the great massif, which recede in a series of ridges and deep barrancos.

A steep 20 minute climb gets you onto the summit ridge, greeted by views across the southern plains around Moshi some 3,000 metres below. Immediately below is a tumult of sheer ridges and spires protecting what looks like an Eden of an untouched hanging valley. The full extent – and grandeur – of the Shira caldera is done justice from here. The broken remains of the southern rim, ie the ridge on which the Cathedral sits, swings round to a western buttress. Above it all, the emperor of mountains lurks in its cloudy mystery. Away to the west, Kili’s twin volcano, 4,560m Mount Meru dominates the skyline.

See William Mackesy’s account below for more on this walk and the wonderful views from the summit.

Climb back down to your packs, and (if from Shira 1) walk northwards along and behind the ridge-top towards its junction with Kibo. A wonderful trail. At an area of hard sand flats, adorned with scores of stone assemblies, you meet the head of the emergency track from the Shira Route entrance. Then slog for half an hour up maybe 200m to the Shira 2 camp on a fine platform with huge views back across the plateau.

The altitude is tough, take it steady and be properly prepared.

www.tourdust.com organise an expedition including this walk: we have travelled with Tourdust, and were delighted.

See our Kilimanjaro Massif page for further general information and photos on Kili and the Shira Plateau.

We're up at 6.30 again, emerging to a quiet grey sky with the prospect of sun. Our regular huge breakfast to set us up, and a seat in the sun outside the mess tent as we get sun-creamed up.

We're off to the Shira Cathedral, a short ridge high on the southern caldera rim and a diversion from the direct track to Shira 2 camp.

We have a gorgeous walk across the plateau, gradually climbing on a good path which winds through vivid, ravishing shrub-land, widely spaced to aid appreciation of each individual specimen, from elegantly sculpted junipers..... 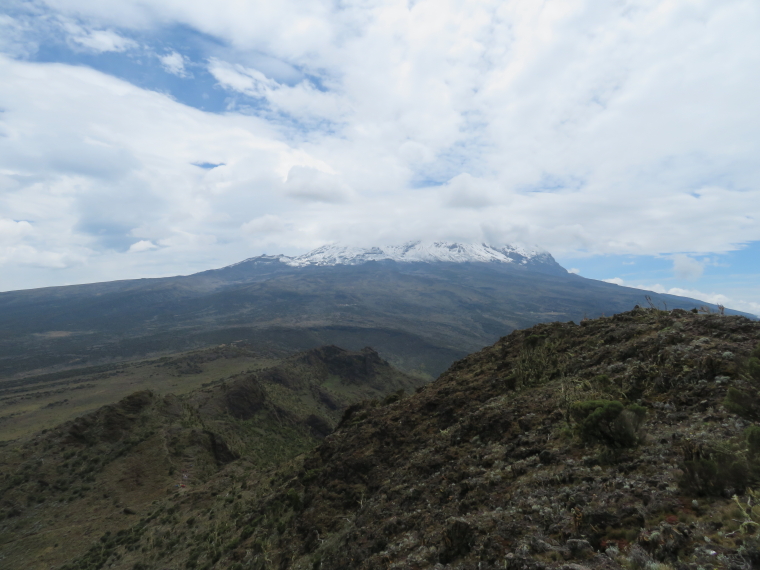 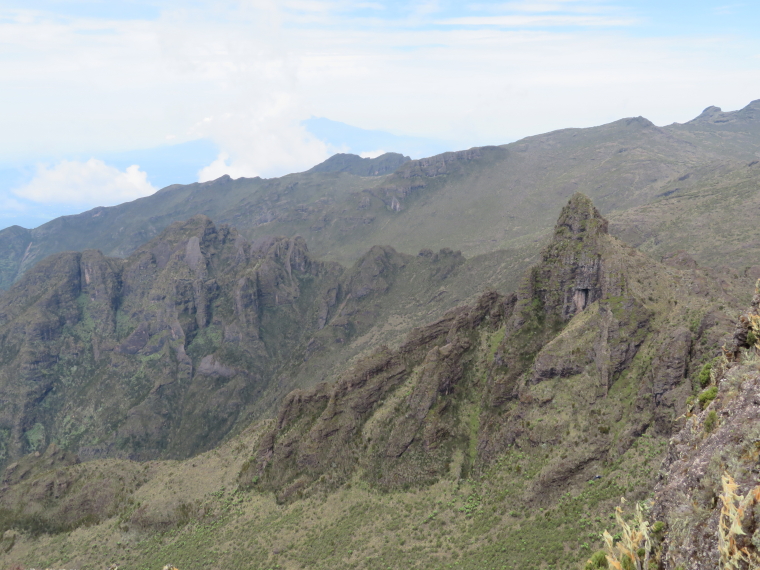 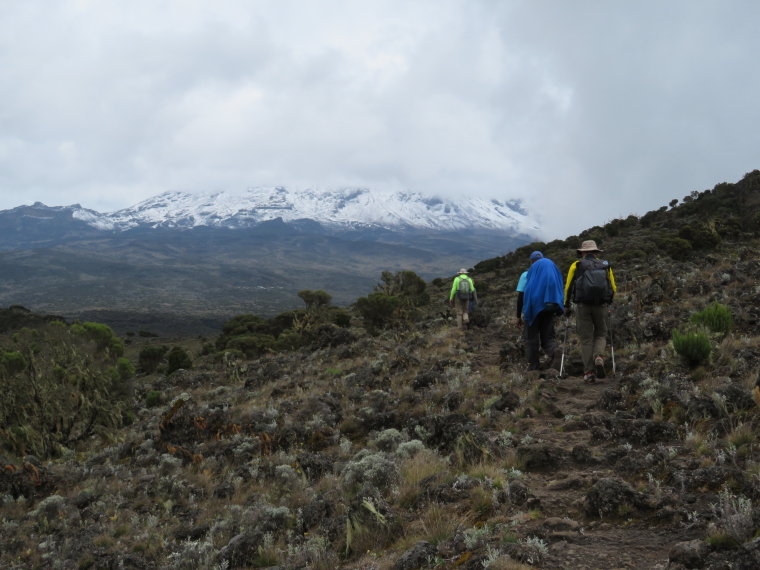