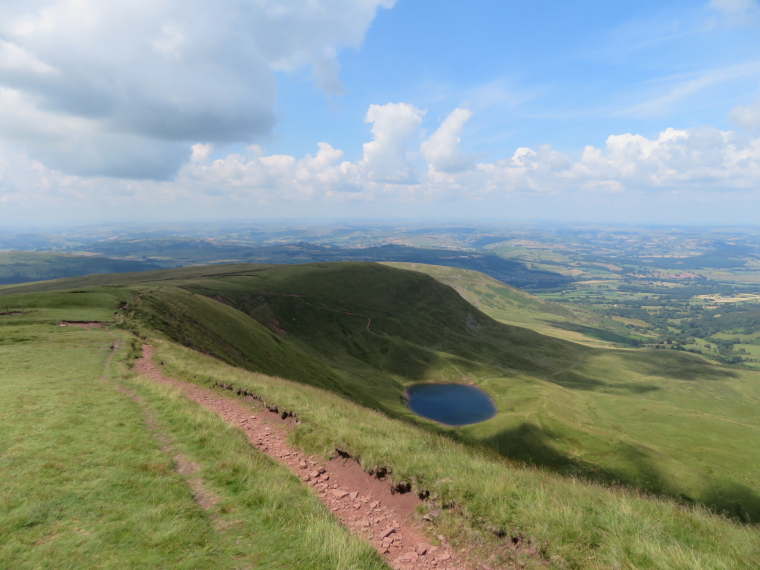 The Brecon Beacons are a long (approaching 70km) line of summits lined east-west to the south of the town of Brecon and north of the south Welsh mining valleys, although only the massif around Pen Y Fan at the centre had the Beacons name traditionally. They are now all part of the Brecon Beacons National Park. (The NP also includes the Black Mountains, which we deal with separately.)

This high central ridge commands enormous views in all directions, both along the line of the mountains, with their grassy slopes and sharp summits, and out to the north along declining ridges to the gentle rolling farmland of central Wales and south to the hills that separate the area from the mining towns and villages of the south Welsh valleys. From some angles, the Beacons can look deceptively gentle, but there are ice-carved cliffs and crags aplenty.

These long and often exciting ridges, with deep cwms (cirques) gouged between them, make for a whole series of wonderful walking opportunities.

Pen y Fan really is a most beautiful mountain - on a good day! It is the high central summit of the Beacons and South Wales’ highest mountain, with enormous views in all directions, both along the line of the mountains to east and west, with their grassy slopes and sharp summits, and out to the north along declining ridges to the gentle rolling farmland of central Wales. Expect crowds on top on good days in season. Some paths are emptier than others.

You can approach Pen Y Fan from several directions. From the north, you can climb one of three ridges or ascend a couple of valleys before making the big climb. Which you choose depends on how direct you want to be and your options for linking your start and end points. From the Storey Arms area (south-west) is the most direct approach, a long slog up one of the paths up steep slopes to the shoulders below Corn Du, the flat-topped peak just to the west of Pen Y Fan. To the south is the tremendous ring of ridges around the Taf Fechan valley, which you can walk along. These can be combined into the marvellous Pen y Fan Circuit (or Horseshoe).

Cwm Oergwym horseshoe at the eastern end of the massif. A wonderful circuit from the north around the huge and beautiful Cwm Oergwym valley: climb the long Pen Y Bryn ridge to the east, skirt Waun Rydd then swing road the steep cwm head to 719m Fan Y Big at the junction with the next northward ridge (Cefn Cyff), which starts narrow but becomes wider on top as you follow it down towards your start. An outstanding up to 17km, depending on where you start, with various option from Llanfrynach or nearer.

The Forest Ffawr group is not as high or concentratedly exciting as the high Brecon Beacons, but is fine and remote hill and moorland with the Beacons Way running along its entire northern cliffs and ridges. There are some exciting day walks to be made along it.

The ridge above the imposing Craig Cerrig cirque in the north-east swings around to 629m Fan Frynych, which sits high above steep slopes as a northern outlier of Fforest Fawr. There are various ways to approach it.

There is a good walk to be made on the woodland path east of the River Mellte to inspect a group of exciting waterfalls.

The Black Mountain (no relation of the Black Mountains to the east) is a large roadless group in the far west, remote and wild landscape with some good mountains to climb and long, exciting escapements and cliffs, cirques and glacial lakes to admire, as well as areas of shake holes and limestone excitement. Come here to really escape the world. Great walks include (east to west):

Cribarth (the sleeping giant) to the south-east.

Fan Foel: this thrilling 781m promontory-peak is at the heart of this wild area, and is a long and exciting walk in above or below long escarpments along, the Beacons Way (take the southern of two options), from north-west or south-east.

Further west, the Beacons Way follows a long north-south ridge from the northern farmland up to the rough, intriguing limestone of Garreg Yr Ogof and 635m Garreg Las.

See more on the Black Mountain.

Blorenge is so far east, due south of Abergavenny, that it is barely in the National Park and barely a Black Mountain. Its main interest is its years of industrial (mining/extraction) history, which has justified its slightly surprising World Heritage Site status. So, an intriguing place and with good views, but the most thrilling walk in the NP in scenic terms.

Craig y Cilau. These exciting limestone cliffs form a fine horseshoe south of the River Usk, which makes for a walking delight along a former quarrying tramway at their foot, with beautiful northward views towards the Black Mountains and the cliffs, with caves and quarries, to the south. Above the cliffs is the interesting empty upland of Mynedd Llangynidr, a classic limestone landscape replete with outcrops and sink holes. There are various ways of making this walk, but a circuit from Llangattock would be the ultimate. Up to16km. DWIBB has a good version.

Further west, you can make an exciting walk up the narrow and beautiful Cwm Cleisfer valley and onto the high Mynedd Llangynidr moorland.

Beacons Way: the long-distance path: an extraordinary route – so interesting, so regularly beautiful – which zig-zags its way across the width of the National Park, consistently traversing its finest areas and taking in two days of the gorgeous Black Mountains while at it. It is fairly challenging route, more often than not climbing to the high ground for thrilling views of the gorgeous landscapes. The whole 159km (99 mile) trail takes 8 days, but there are many sections to walk as single outings.

This can be demanding walking in remote mountains. Expect unpredictable weather: this is one of the wetter bits of the UK!

Good Ideas and Information In Day Walks in the Brecon Beacons (DWIBB) by Henri Roberts.

Your thoughts are welcome! Please help us by making suggestions and sending photos! Thank you! 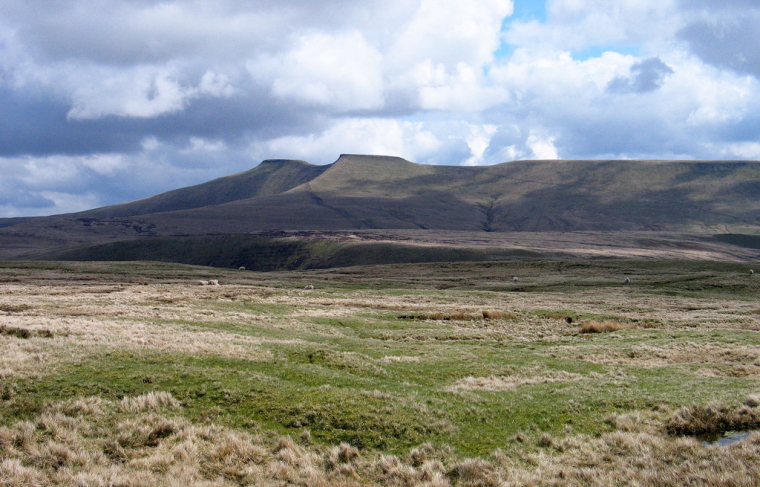 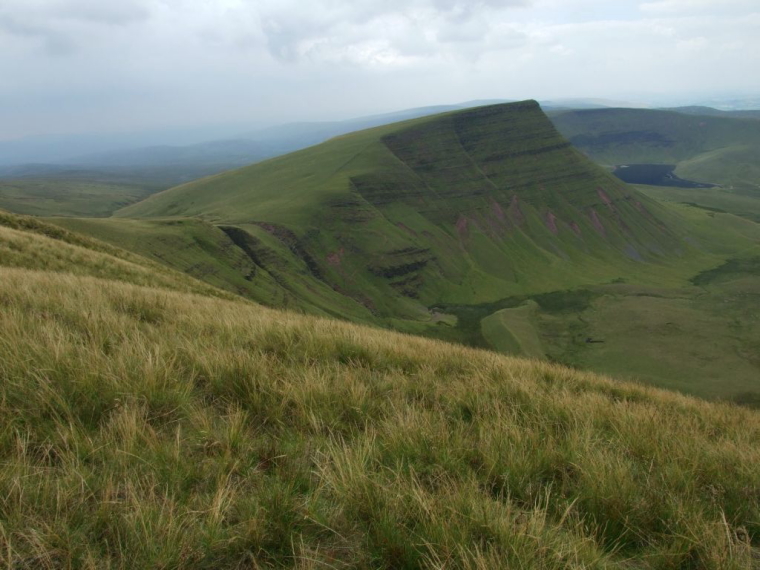