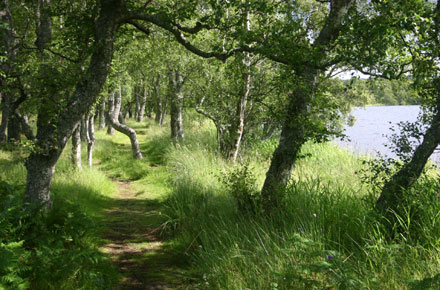 This beautiful area of heathery moor, in the process of natural reforestation with open birch forest, and two lovely lakes, has a wealth of natural and historical interest. It is a Nature Reserve within a National Park.

Wonderful undulating mixed open woodland sheltering boggy former glacial dips and the famous lakes, with heather hills beneath, all backdropped by the ravishing beauties of the highland hillsides and the looming presence of Morven, the first mountain of the Deeside Highlands behind. A wide variety of interesting wildlife reflect the various specialist areas: a range of waterfowl and summer-nesting osprey; woodland birds including the willow warblers; and a multitude of dragon and damsel flies and moths.

This small area is rich in traces of ancient humanity: an Iron Age stone hut circle (of surprising size); a 2,000 year old crannog (man-made habitation-island) which once held a huge round hut housing up to 20 people and was apparently in use to the Middle Ages; a fine granite Celtic cross, 1,200 years old; an island once home to a royal peel tower; and hilly farmland showing traces of thousands of years of cultivation.

The area is just as rich in the remains of the last Ice Age. The two lakes are kettle holes, holes forced by the weight of enormous lumps of slow-melting ice; there are ridges which are of rocks dumped by sub-glacier rivers; the extraordinary smooth-sided circular cauldron indicates how big and powerful the now-small river must one have been.

Circuit beautiful Loch Kinord, admiring the crannog in its sparkling watery setting, with the heathery South Deeside hills behind or wander through pretty lakeside trees then swing out into the woodland and farming remains to the north, admiring the cross and hut circle in particular. Or explore the fascinating “raised bogs” of Parkins Moss.

Cut through regenerating moorland birch and pine woods, walking along the tops of eskers – ridges of rubble that were formed in stream beds below glaciers – to the beginning of the Burn O’Vat.

Explore the ludicrously pretty little glen, known as the Burn O’Vat, that leads to the fabulous cauldron where a 17th Century brigade hid behind the waterfall. It was much admired by Queen Victoria.

You won’t be alone in the Burn O’Vat in particular, as it is a deservedly popular tourist site on Aberdeenshire’s Deeside, between Aboyne and Ballater. Get there early or late if you can.

This area is marvellous at any time of year, although Summer, while busiest, has the best (most consistent) weather.

There is a good hut at the Burn O’Vat carpark, with excellent information on the area and its history. 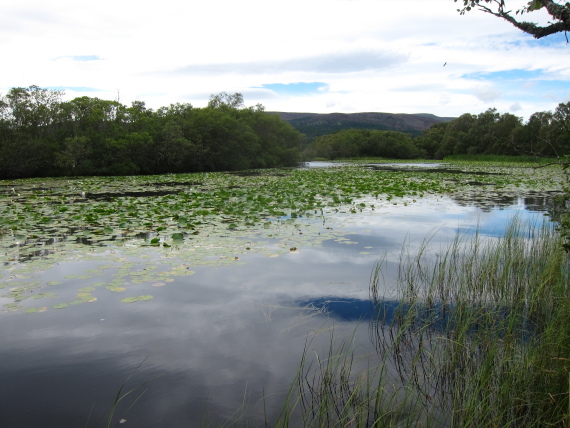 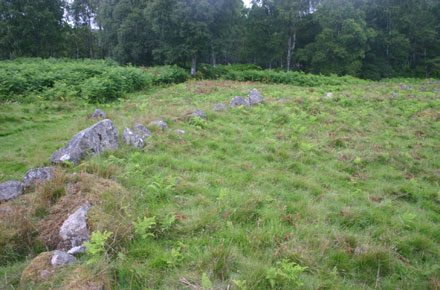 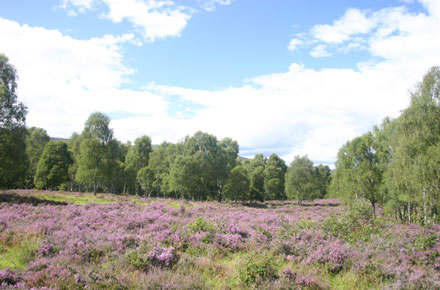