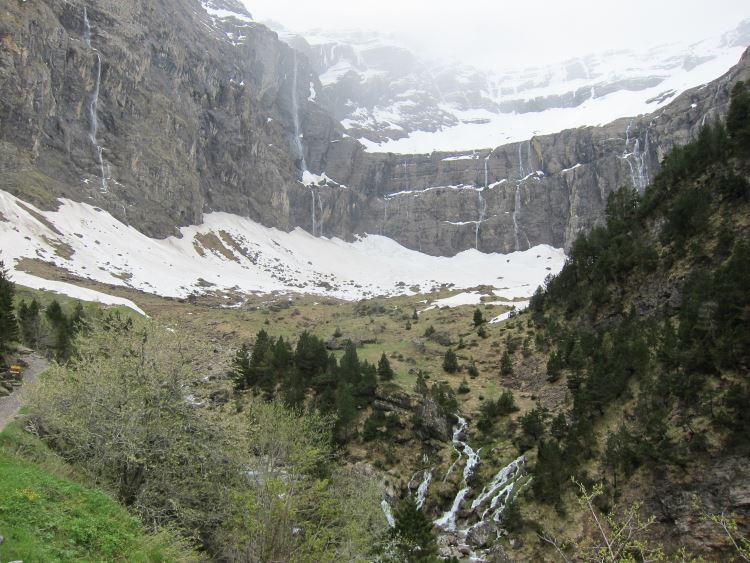 The Cirque de Gavarnie is perhaps the most famous single site in the Pyrenees, and it pays a commensurate price of crowded trails in the high summer months. But it is famous for a very good reason: the spectacular cirque, a vast glacial scoop out of the heart of the high range, an intrusion which almost breaks through to the Spanish side. This semi-circle of cliffs, some 1,400m from the bottom to the high ridge top, which forms the border with Spain, is nearly a kilometre across (the 3,000m peaks of the high ridge are getting on for 5km apart). Although it look from a distance to be sheer-sided, the cirque's walls rise in three cliff-steps, limestone, granite, limestone, with steep slopes in between. The high cliffs still nestle the remnants of the great glaciers that gouged and then filled the cirque.

The cirque is enhanced by waterfalls, including the Grande Cascade, claimed to be Europe's highest waterfall at 423m, and the Breche de Roland, a great slice in the high and surprisingly thin wall of the cirque which you can reach and pass through to access the high range (including the superb Ordesa Canyon/Monte Perdido area) and elsewhere in the Spanish Pyrenees. (See also our Gavarnie/Ordesa Circuit page, one of our Top 100 Walks.) Gavarnie and Ordesa have been created World Heritage Sites together, unusually for cross-border features.

The discovery of the cirque started the Pyrenees' tourism boom in the late C19, with huge numbers coming here by the mid C20. While numbers coming have dropped off a lot, you won't be alone here in high summer. To state the obvious, try to come here outside the main July-August season.

The area is home to a goodly representation of Pyreneean wildlife (we saw a large herd of izard chamois grazing along the eastern slopes of the d'Estaubé valley) and a multitude of lovely flowers and trees - the forests up the Gavarnie and Heas valleys are particularly pretty).

There is a lot of fine walking in the area, as a good look at the map will show. These include:

- The Cirque de Troumouse, which is utterly and thrillingly different from its western counterparts, a huge (10km across, apparently) theatre of cliffs and peaks surrounding rough, lake-studded ground with a raised rocky hill at its heart which commands tremendous views around the cirque. You can also traverse out round the hillsides above the Heas valley toward Gavarnie (see below).

- The Cirque d'Estaubé, a wonderful, long but gentle hike up a gorge then a lovely grassy valley to the bowl below the superb face of the eponymous cirque, from where you can hike back over a high col to the Espugettes refuge and thence Gavarnie.

- The lovely high-level traverses from just below the Auberge de Maillet round the hillsides above the Vallée de Héas to the Barrage des Gloriettes (at the bottom of the Vallée d'Estaubé), and/or on from the barrage round the Piméné massif and back high up the eastern wall of the Gavarnie valley (and thence to Gavarnie itself, with huge views all round.

- There is a fourth fantastic cirque in the Gavarnie region, east of Troumouse, de Barroude. Mainly approached from Héas on a long but superb trail (on the Haute Route) which crosses two passes, it is an isolated place and commensurately gorgeous, with an enormous rock face and a pass through to Spain. You can stay in a small but popular hut. It is also accessible from the north-east, up the Géla valley.

While its valley is lovely - meadows and woodlands crammed below tough cliffs on both sides - Gavarnie itself isn't specially thrilling (and is thronged in summer), although it has cleaned itself up over recent years. Gedre, downstream, is a nicer village (although itself, in 2013 at last a bit depressed-looking in a tidy sort of way) and a good base, with a road heading off to the area's two other great cirques, Troumouse and  d'Estaubé.

The essential book for this area is the excellent Cicerone, which has further walks you should think about. 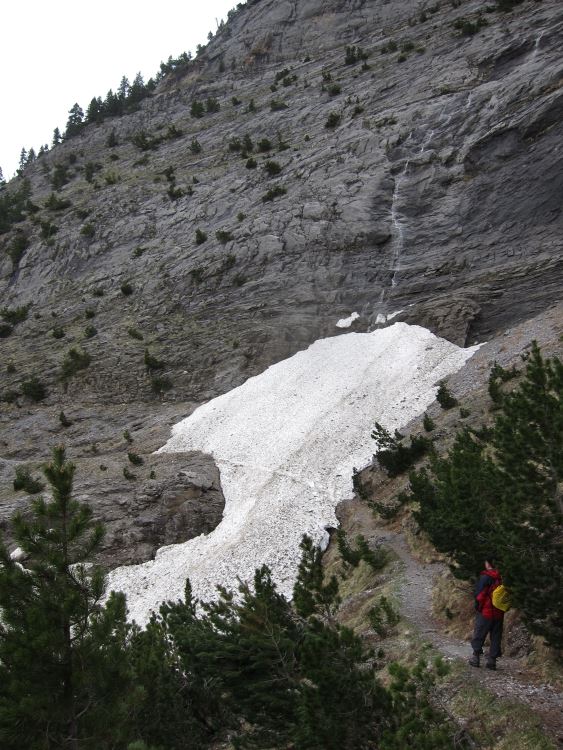 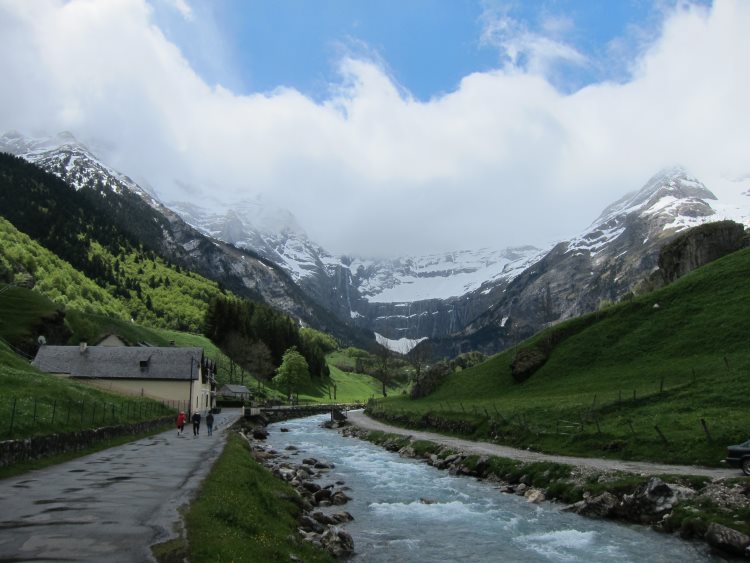 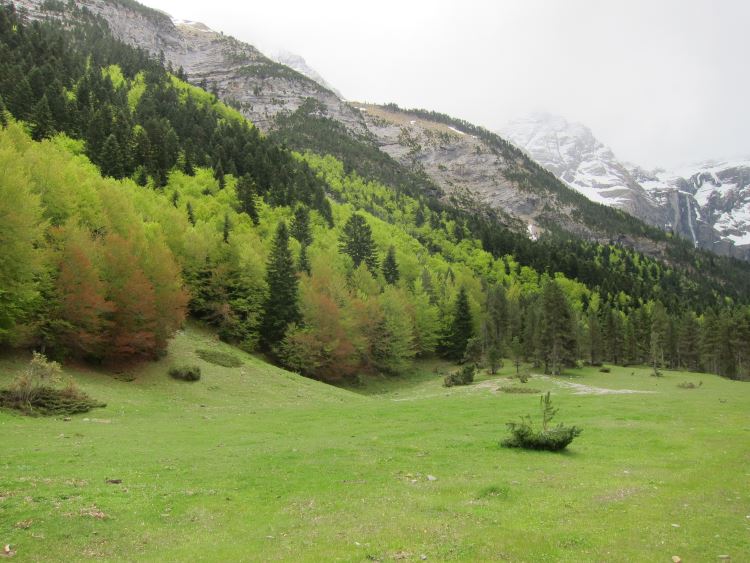