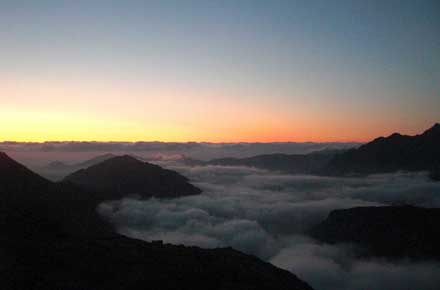 The GR20 is one of Europe's most exhilarating - and most celebrated (famously infamous) - footpaths, a tough trek in magnificent mountains with scrambles to horrify those of a nervous disposition. It runs from the island's northern coastline along the 180km length of its central mountain spine, over a series of Alpine peaks topped by 2,710m Monte Cinto.

Along the way are innumerable aretes, ridges, and relentless ascents/descents. The most demanding are assisted: some, the Cirque de Solitude in particular, can be heart-stopping and are genuinely dangerous, and during wet weather (of which there is plenty, with thunderstorms coming thick and fast in high summer and howling winter weather) should only be tackled by the very experienced. Thanks to a series of chains and ladders it is, at least in summer, accessible to anyone fit, without the need for special climbing skills or gear. This is of course one of its main attractions: that it offers levels of high mountain access that are rare for the (fit!) walker.

There is, then, some basis for the route's reputation as a monster, although there are alternatives to some of the toughest sections. But, with the refuges often splendidly sited, and abundant pools, plus the odd comfortable gite, there are opportunities to relax and enjoy the experience when the weather smiles.

Corsica, a part of France since the late 1750s and birthplace of its most famous son, Napoleon, still maintains its own special identity. The people still speak their ancient tongue; the island is French by administration, Italian and north African by emotion and location; the atmosphere is relatively unsullied by modernization. Corsica's rugged terrain, much of its higher reaches bare rock, is mistakable for something rather more alien. This is truly wild, unspoiled mountain country, rich with the scent of herbs and cooled by high forests and riddled with ancient footpaths. All of this wild "otherness" is communicated in the GR20, leading you through its most isolated, magnificent areas. Note: as at late 2016, the famous Cirque de Solitude is closed as a result of landslip. There is an alternative route. Check the current position.

On its central spine Corsica is often astonishingly beautiful, albeit harsh: outlandish towers and cliffs above ravishing lakes. Add in glimpses of far-off sea and the maquis heathland on the lower slopes, with its mingled heady aromas and varied and vivid graduations of colour - rosemary, thyme, fennel, lavender and myrtle; rock roses, strawberry trees, holm oaks, cork oaks and magnificent indigenous Corsica pine. The trek leaves the remoter mountain passes to plot near to the towns of Monte Cinto, Monte Rotondo and Monte d'Oro.

It is not just the scrambles that make this a tough undertaking. The weather is often foul - we mean really horrible - and the huts basic, cramped and crowded, especially when it is wet. Carry a tent, but, while camping is delightful in good weather, it can quickly get miserable in bad. All this can make the GR20 an exhilarating challenge, if you enjoy that sort of thing (it is a lot of peoples? best-ever walk), but quite a lot of days can take you way beyond what would be considered fun by rational people.

The whole route will take over two weeks of spectacular isolation and remarkable views. The northern section (GR20 Nord) can be done in a bit over a week, but is the toughest part. GR20 Sud is (relatively) gentler. GR20 can be walked north to south (most people) or south to north.

These are personal notes on the GR20 – Paddy Dillon writes THE guide book, and there is no point in trying to replicate it; the other web links provide faster itineraries than the base 15 stages/15 days in Paddy Dillion's book. All my stage number references are Paddy Dillon's stage numbers. No-one would plan to follow my itinerary out of choice but despite set backs I did it in 13 days, starting from the north, breaking after stage 3 and restarting the same day from the south. I started with a companion who blew out after 3 days then walked with 4 Dutch guys who very generously let me join their team – and I didn't even have to wear an orange shirt.

Read the guide books carefully; my experience is no worse than the books & blogs describe; it just all happened at once.

Walking the GR20 was one of the best 2 weeks I have spent. It's tough and it's dangerous – I saw 3 memorials to walkers who had died en route – but you're only ever 2/3 hours walk downhill to civilisation. It's a truly excellent brush with harsh untamed nature; the scenery and surroundings are dramatic, beautiful and threatening.

Preparation – I spent the week before walking on a sun bed at the Belles Rives Hotel on Cap d'Antibes – not ideal, but I was recovering from a shoulder operation that had gone wrong. Again not ideal, but I didn't break it on purpose and I had been planning the GR20 for a long time. I was going, come what may and the doctor had cleared me to carry a rucksack.

I am usually fit; football/pilates/walking/riding-several-times-a-week fit, but the shoulder had restricted most forms of exercise although..... 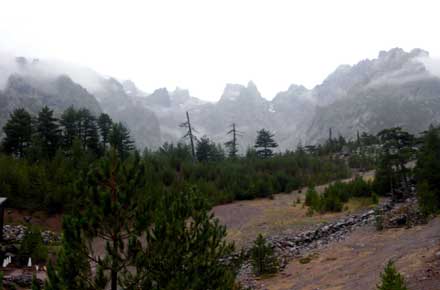 Name: Dick Everard
Posted on: 24/01/2011
Paul Hadaway doesn't recommend September but I walked the whole of the GR20 in 2002 starting on 15th September from North to South. We never had any problems with accommodation although the hut at the Refuge de Manganu was a little crowded, after some bad weather which had stopped those who were staying there the previous evening from moving on - although we managed to get there albeit the weather wasn't pleasant. That, however, was our only bad day and we had blue sky and light cloud for most of the two weeks. Regarding difficulty, I wouldn't say that it was particularly difficult provided your are fit and don't mind heights. I was only 54 years old at the time but one of my colleagues was 66 and he wasn't the oldest person on the walk as we met a 75 year old Frenchman with a broken wrist(he had fallen out of his bunk bed). OK, we were fit and lucky with the weather. It was certainly more difficult but only just than the GR5 which I walked this year (St Gingolph to Monaco) with the same colleague now aged 74! You just need to be fit and get plenty of training carrying a heavy rucksack but 10 or 11kgs is enough not 13kgs. Although we carried a tent for the whole of the GR20, it was never used as there was always space in the Refuges, Gites or hotels. It took us 16 days walking i.e we twice walked two of Paddy Dillon's stages in one day. We carried some dried meals for emergencies but we only ever had to cook our own food once otherwise we managed to get a cooked meal every evening and even had scrambled eggs for breakfast at one Refuge.

I wonder whether you have read about the accident at the Cirque de la Solitude on the GR20 in Corsica this year. I only came across it by accident when looking something up on the internet. It is difficult to get a full picture of what happened but it seems that possibly 7 people were killed following a rock fall/landslide following very heavy rain. The path is presently closed at this point but the only English Report was by Paddy Dillon of Cicerone in the Outdoor Magic forum and that on Corsica.forhikers. Most of the reports are dated just after the accident happened when they only knew of three dead and I don’t think it was until several weeks later that the full picture emerged. Most of the newspaper reports are in French so unless your French is good, they are difficult to understand and the Google translation isn’t much help. I thought it might be sensible to highlight the dangers of walking in mountains in Walkopedia as I am sure most of us get complacent – I know that you do include warnings. It takes something like this to remind everyone that they need to be careful not that I would want to put anyone off walking the GR20 or any other high level route. On a practical matter, I don’t know how one discovers when and if the stage through the Cirque de la Solitude will be re-opened – maybe on Corsica.forhikers: this is the latest info from there: http://corsica.forhikers.com/forum/p/25089 .

From - William
Walkopedia says THANK YOU! 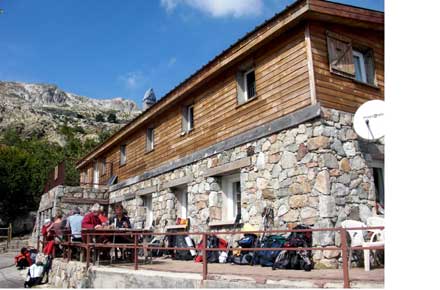 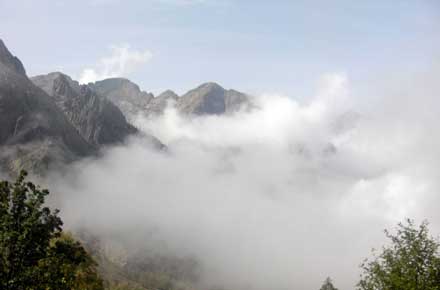