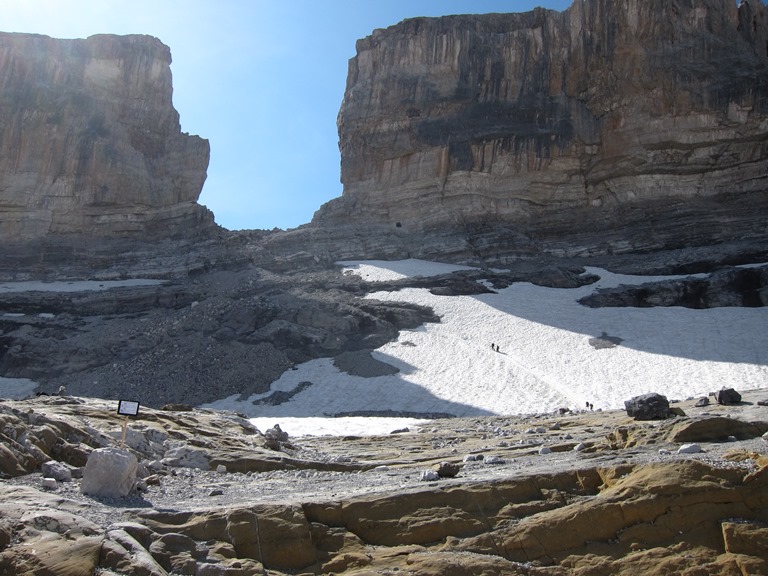 The Pyrenees are wonderful, but less known than they should be.  Long may this last.

Features to relish include the struggling remains of the mighty glaciers that gouged out the famous cirques such as that at Gavarrnie, needle peaks and serrated ridges, deeply-hewn canyons and lovely alpine valleys.  The Pyrenees were formed by the usual tectonic pressures, with a heart of granite and limestone flanks, pushed up to form the range?s highest peaks. Water and ice have eroded this softer rock to create the dramatic landscape we now know, including the famous cirques ? huge, sheer-sided scoops out of the mountainsides.

The range supports a rich variety of animals, include the izard (the local chamois), deer, some recently re-introduced brown bears and hordes of endearing silly marmots.  Raptors and vultures head up an extravagant birdlife, especially at migration times.

There are three great long-distance trails in the Pyrenees, which can be walked in sections or indeed, for the tough and time-rich, their entire length.

And finally there is the Sentier Cathare a very different and history-laden trail which winds through the foothills of the eastern French Pyrenees.

Pic du Midi d'Ossau: a huge (2,884m) stand-alone peak. The walk around it is one of the finest in the Pyrenees.  It can be ascended in a tough day, revealing exceptional views. This area deserves its own page, which we are working on.  Please help us with ideas and photos.

Balaitous: a very remote, pristine, but rough wilderness around a tough, rocky peak or the border ridge.

Gourette: a lower but thoroughly challenging massif standing out to the north of the high range. The central valley contains some exquisite walking, and there are some fine ridge walks as well.

Vallee d'Estaing: the mountains surrounding this particularly lovely valley beg to be explored. Think lakes, high cols and high refuge to use as bases.

Vallée de Marcadau: an exceptionally beautiful area of varied walking south-west of the pleasing town of Cauterets. You can spend several very varied days here based on Refuge Wallon.

Vignemale and Vallée de Gaube - the biggest mountain in the entire French side of the range (at 3,298m), with fine walking in the surrounding French and Spanish slopes - in particular in the vallée de Gaube to the north - and an ascent of the mountain itself. Think granite, high lakes and crazed ridges.

Vallée de Lutour: another lovely valley above Cauterets, this time to its south-east. Immaculate and classically Pyrenean scenery. A gorgeous valley surrounded by high broken ridges and peaks.

Gavarnie Area: superb walking as in the environs of three dramatic but very different glacial cirques. See also the Cirque de Troumouse and the Cirque d'Estaubé. And an ascent to the dramatic Breche de Roland  is unmissable. Consider extending this to make a great multi-day walk such as the Garvanie/Ordesa Circuit.

Néouvielle NP: the GR10 passes by this ludicrously rough and granite massif which nestles some particularly lovely lakes.

Bagneres de Luchon area: south of this spa town is some of the best walking in the Pyrenees: the cirque d'Espingo and The Vallée de la Pique and Vallée du Lis.

The Carlit Massif: east of Andorra: a lovely and popular area: its granite base and glacial origins make for rough terrain, visual drama and lakes. We will be creating a separate page for the Carlit - all input welcome.

Ariege Valley: The area around this great gash into the (French) eastern Pyrenees is home to a mass of great walking, as well as the upper reaches of the Sentier Cathar.  Major peaks, lakes, wonderful scenery but relatively empty. Rich in animal life and riotously floral. This area deserves its own page, which we plan to work on.  Please help us with ideas and photos.

For the historians among you, the Sentier Cathare winds, through lovely and varied foothill country, between some of the great Cathare sites; the Sentier des Bonshommes, then crosses the high Ari?ge Pyrenees into Spain along paths used by the Cathars to escape their persecutors.

The Capcir: a slightly strange high plateau with mountains around, including the magnificent Carlit Massif. Bare and less enthralling than the high range, it is nonetheless beautiful and rich in animal life and flowers. There is a 4 day Tour de Capcir. This area deserves its own page, which we plan to  work on.  Please help us with ideas and photos.

Canigou: the last great eastern bastion of the range, the 2,785m Canigou massif more than merely dominates its surroundings: it has a special place in the Catalan imagination. It makes for fine and varied walking, its lower slopes forested but its peaks all rock, scree and cliff. Unsurprisingly, you get huge views (Andorra to the Med) from its peaks on a good day.Sitting between the Tech and T?t valleys, Canigou can be climbed from many directions, but all require a night in a refuge. The routes are many and varied, so plan carefully. There are many day walks you can do on the massif.

See our Eastern Pyrenees page for more on the varied and fascinating walking at the eastern end of the range, within striking-distance of the coast. Including the Pilo de Belmaig ridge.

Expect rain at any time on the western and central slopes of the French side, although you will be unlucky not to get gorgeous clear days for the majority of a summer expedition.  Snow lies late, with the high range only really clear by mid July. July and August are the best months for tackling the high range, with clear(er) passes and better (less unpredictable) weather. September can the best month of all, with clear day and fewer people, although it gets colder at night and the chances of snow increase toward the back end of the month. Be ready for any weather at any time, though, in the high mountains.

Parts of the range really heave with tourists in high summer (Gavarnie especially), and many day walks are busy at that time.  So, come prepared to tolerate or to look for remoter walking.  May and June (if you are happy not to have access to the highest paths) and September are accordingly the best times to come.

Accommodation varies from hotels and inns to gites and camping in the valleys.  Once on the high ground, the array of fine refuges are the main option - although they get busy, so book well ahead if coming in the popular months.  Camping is very restricted in the high country, so check out the current requirements at the planning stage. See our Practical Information section for more information.

Mention must be made of one particular guidebook, Cicerone's - Walks and Climbs in the Pyrenees which you should not approach this area without. See our practical information section for more books. 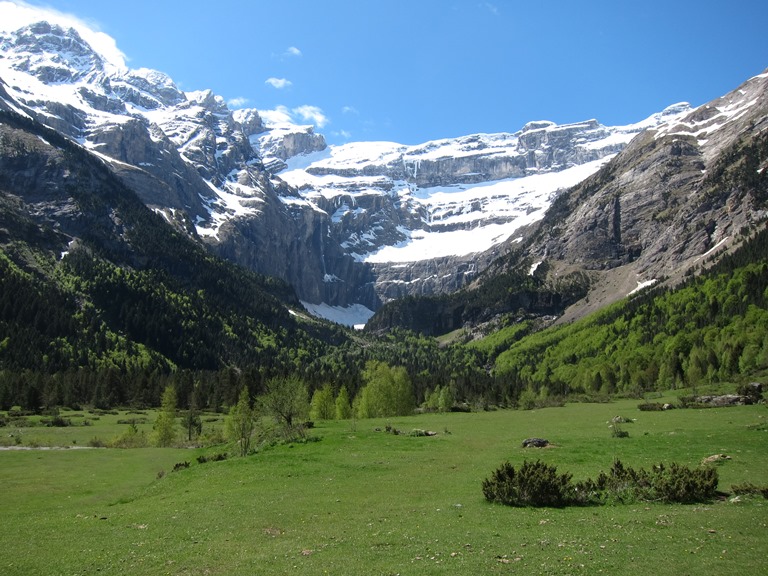 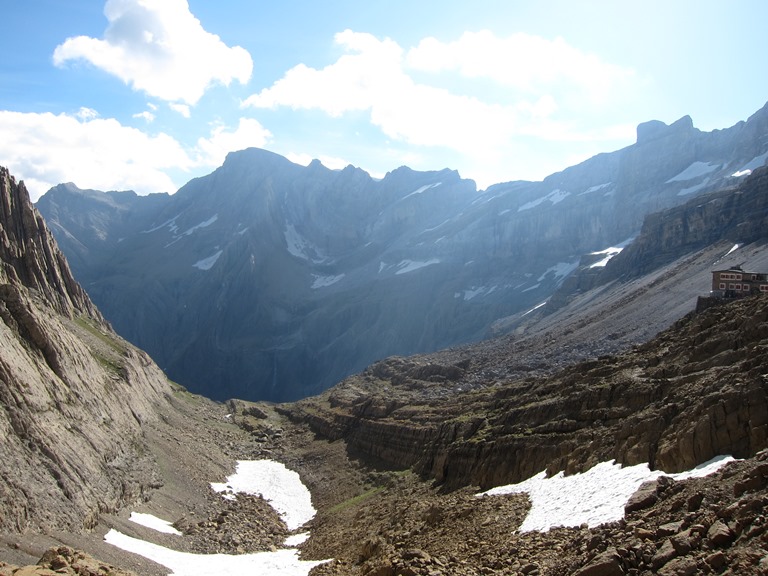 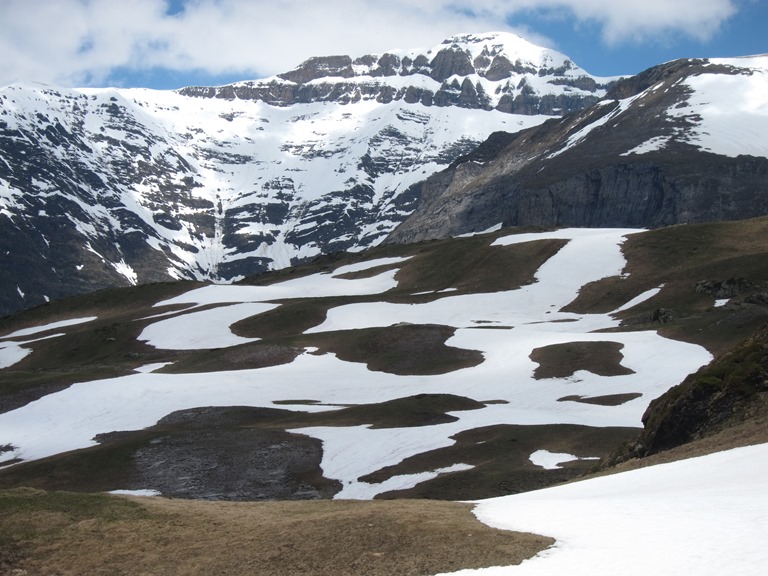