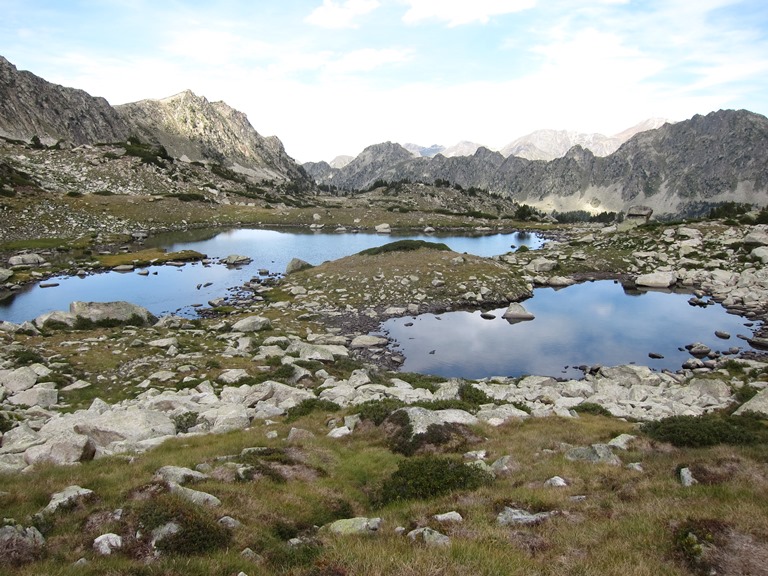 Like it's elder brother, the higher Pyrenean Haute Route (HRP), the GR10 winds from coast to coast, following and crossing the ridges and valleys of the high Pyrenees for some 900km. Unlike the HRP, it stays on the French side and spends most of its time on the (slightly) lower outer massifs, with more regular stops in villages for some comfort, culinary variety and replenishment. Counterintuitively, though, while a less remote and risky undertaking, it involves a huge amount of ascent and descent (said to be 49,000m), largely as a result of its inevitably running across the prevailing grain of the land. It takes 50 days compared with the HRP's 45.

You can travel lighter than on the HRP as you can manage without a tent and cooker and food reserves. Not that many people walk the entire length of the GR10, for fairly obvious reasons. Walkopedia met Douglas O'Brien, an intriguing American, who was walking it without a map. An interesting approach, which made for freshness and daily uncertainty, but...

There are various ways to choose sections to tackle if you don't have the time or inclination for the whole route. First, if you are going to be in an area anyway, find the local GR10 sections, as they are likely to be some of the best walking about. If you want to tackle a few days, various factors will come into play, including how hard you want to walk, how remote you want to get (and thus how much you want to carry) and your preferred scenery - gentler green hills in the north-west, dryer, scrubbier hills towards the Med, or higher, tougher, more dramatic mountains in the middle.

You can walk the GR10 in either direction, although the Cicerone takes you west to east, which has the attraction of having he sun on your back rather than your face, if that is how you like it.

Even from the gentler west, you will be making ascents/descents of 1,000m within a few days, so, while lovely and relatively civilized of an evening it is not a cynche.  The higher ground soon evolves into gorgeous montane pastureland with big and verdant views.

You enter the high country around day 10. A high, bare, limestone plateau is followed, after the lovely village of Lescun, by the famous Chemin de la Mature, an eye-wateringly spectacular loggers' trail cut into a sheer cliff-face, and then high lakes reflecting the very special Pic du Midi d'Ossau. You get into ever-grander scenery, and ascents/descents can be 1,500m plus. The two-day crossing from Gourett to Cauterets is particularly fine, as is the three-day variant up to the highest range via the Hourquette d'Ossoue (at 2,734m). The long crossing south-east of Barreges, skirting the granite peaks and lakes of the tough Néouvielle NP, is a marvel: you cross the highest pass (the Col de Madamete) here, at 2,509m. Other high-range delights include the crossing from lovely Lac d'Oo to Bagneres de Luchon.

East of Bagneres de Luchon, you enter the (even) remoter southern reaches of the Department of the Ariege. Supplies get much harder to come by, and accommodation is reduced to basic huts - or camping, which would give you increased flexibility. And you meet some really tough and tiring days; most involve total climbs or drops of more than 1,300m, some much more. Your reward is superb walking country and (even) fewer people. A tough but marvellous three days crosses from Siguer to Merens-les-Vals via theRefuge de Clarans and Refuge du Rulke. fine views and crest-walking but some demanding ascents and descents. Another fine walk is the day from Aulus-les-Bains to Mounicou, north of Andorra, crossing remote, rough, lake-scattered highlands with grand views.

East of Mérens-les-Vals, you are into more accommodating country, although it doesn?t lack drama. The two days from Mérens to the Refuge des Bouillouses is a particularly appealing higher traverse, the second day round the lower slopes of the great Carlit massif. Another walk not to be missed is the two days swinging round the northern flanks of the Canigou massif, from refuge de Mariailles to the Mines de Batere. The drier eastern hills are good walking, but a different, lower, hotter world, the uplands of the ancient kingdom of Catalonia.

Please help us develop this page further by making suggestions and sending photos! Thank you!