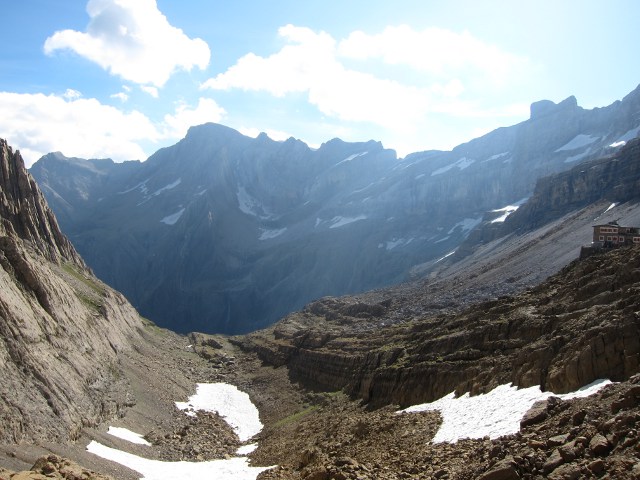 This is the finest day walk you can do in the Gavarnie area, indeed one of the finest in the whole Pyrenees, a spectacular ascent to the famous Breche de Roland, a breach in the wall of cliffs that forms the national border high above the even more famous Cirque de Gavarnie.

The Breche is a huge gap in the cliff-line of such peculiarity, mainly because of its size and sheer-sided symmetry, that it resembles a broken tooth in a perfect face, or a dying hero's sword-mite, which is how the Roland legend has it. In fact, the area has been carved by mighty glacial forces, which, above the extraordinary Gavarnie cirque, have carved the nation-dividing high ridge into a narrow spine and then broken through at the breche.

Described here is the classic route from Gavarnie.

The tough or fundamentalist can begin deep in the valley at Gavarnie, and there are various ways up (some potentially deadly), the main one following the grassy Pouey Aspé valley up from the Gavarnie valley-bottom to the Port de Boucharo. It time is shorter or stamina or commitment less, you can start very immediately from a carpark at 2,000m on the Col de Tentes, west of Gavarnie, on the broken remains of a road hugging the steep hillside to the nearby Port de Boucharo and the Spanish border. Across the deep grassy Pouey Aspé valley, up which the old trade route from Gavarnie winds to the border (and up which you can flog if you are a purist or a masochist), you look straight onto the tremendous cliffs that climb to the high ridge that separates France from Spain.

After a gaze into the typically Pyreneean valley - grassy sides below crags and serrated ridgetops - that drains, somehow confusingly, west into Spain, you are contouring on a series of balconies in these cliffs back eastward towards the high cliffs and shelves above Gavarnie's famous cirque, which remains stubbornly invisible, far below and behind intervening crags.

This balcony walk is heart-swellingly beautiful and dramatic. After an hour or so, you turn south into the lower reaches of a high sub-cirque. After a bit of a slog, crossing a frigid stream beside a waterfall, then climbing, beside what is claimed to be a glacier but which looks like a steep icefield, under very perfect orange cliffs, you gain the Sarradets ridgetop, a perfect place for a snack. You can now see across the top of the Gavarnie cirque to the top end of the famous waterfall (claimed to be Europe's highest)  cascading into the cirque, and on to the vast broken Marboré massif to the east.

The Rufuge de Sarradets is 5 minutes on, and is superbly sited, with similar eastern views but also with a clear view up toward the Breche and the high cliffs.

From the refuge you work up a steep spine of shale, which looks like a glacial leftover. To your right is a long slope of permasnow. Above is a low cliff of brown limestone over which a river of white stones has spilled over the millennia from the ridgetop cliffs far above.

Over the cliff-edge, you a swing up a steep "glacier" (another static ice-slope), then scramble up a final rock-face for a sudden-feeling arrival at the great gap in the cliffs. The ice is slippery, so feel for the footholds with some care as the long slide to the rocks at the bottom has little appeal. Crampons are used by some.

You are struck by how narrow the great range-top wall is, and how high. This really is an extraordinarily atmospheric place, and the photos seldom do justice to the huge scale of the walls and the perfectly-cleft gap. The views are of course to die for (which you could), and utterly different: the sheer rock faces and moist greeneries to the north contrast with the dry ridges receding bluely to the invisible plains of Spain to the south. Immediately to the south is a bare, pale beige, wedding cake of alternating steeps and layers, immediately behind it the lips of the vast Ordesa Canyon.

Consider staying a night at the Refuge des Sarradets, to enjoy the exceptional drama of the scenery as the light changes.

You can return the same way, although there are other options for return. There is endless choice if you head on down from the breche into Spain. A lot of walking can be fitted in in the Ordesa Monte Perdido region before you head back to France, and you can return by another pass, creating a Gavarnie/Ordesa Circuit, one of our Top 100 walks.

The Breche can of course be reached from the Spanish side, although it is a day walk only for the superhuman, and is most often approached from the Rifugio de Goriz high above the head of the Ordesa Canyon.

The Gavarnie region heaves with tourists in high summer, and many day walks, including the Breche are busy at that time.  So, come prepared to tolerate - or come out of high season if you can. Accommodation really comes down to the refuges - although they get busy, so book well ahead if coming in the popular months.  Camping is very restricted in the high country (but possible below Sarradets, so check out the current requirements at the planning stage.

Expect rain at any time, although you will be unlucky not to get some gorgeous clear days in summer and early Autumn.  Snow lies late, with the high range, including the Breche only really clear by mid July.

Mention must be made of one particular guidebook, Cicerone's Walks and Climbs in the Pyrenees which you should not approach this area without.

SEE OUR PYRENEES PAGE FOR PRACTICAL AND GENERAL INFORMATION AND MORE PHOTOS.

This great trail, one of Europe's finest, starts very immediately from a carpark at 2,000m on the Col de Tentes, west of Gavarnie, on the broken remains of a road hugging the steep hillside to the nearby Port be Boucharo and the Spanish border. Across the deep grassy valley up which the old trade route from Gavarnie winds to the border (and up which you can flog if you are a purist or a masochist), you look straight onto the tremendous cliffs that climb to the high ridge that separates France from Spain. After a gaze into the typically Pyreneean valley - grassy sides..... 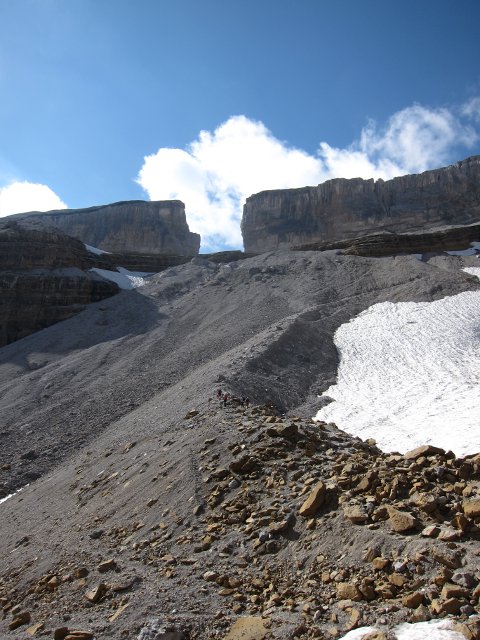 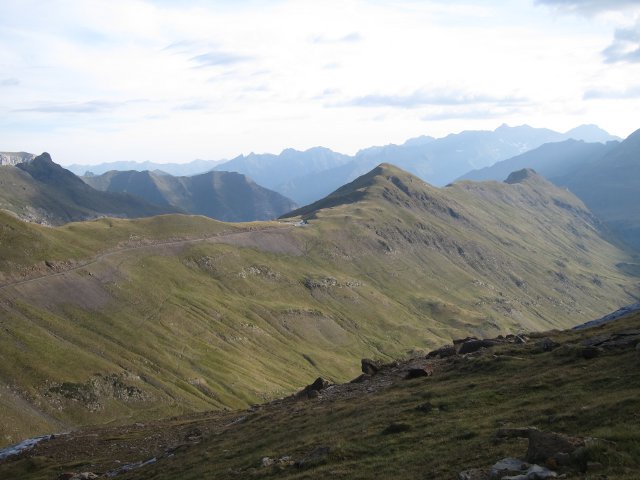