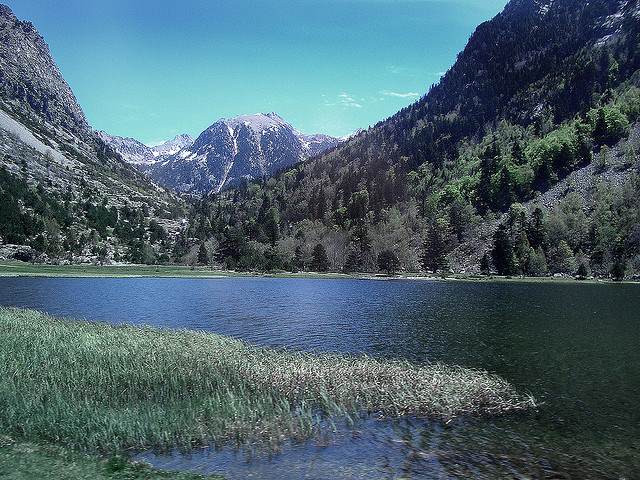 The Pyrenees are wonderful, but less known than they should be. Long may this last.

Features to relish include needle peaks and serrated ridges, deeply-hewn canyons and lovely alpine valleys and the struggling remains of the mighty glaciers that gouged them out.  The Pyrenees were formed by the usual tectonic pressures, with a heart of granite and limestone flanks, pushed up to form the range's highest peaks. Water and ice have eroded this softer rock to create the dramatic landscape we now know, including the famous cirques - huge, sheer-sided scoops out of the mountainsides.

The range supports a rich variety of animals, include the local chamois, deer, some recently re-introduced brown bears and hordes of endearing silly marmots.  Raptors and vultures head up an extravagant birdlife, especially at migration times.

There are three great long-distance trails in the Pyrenees, which can be walked in sections or indeed, for the tough and time-rich, their entire length

HRP or Pyrenean Haute Route: "The" great Pyrenean trail, this path winds among the ranges' highest peaks, crossing in and out of Spain.  Superb high-level walking, albeit a long tough hike and an exhausting slog in places. You will need to carry a light tent (etc) for parts of this trail.

GR11: Which winds across the highlands of the Spanish side. Often outstanding walking.

One other multi-day walk that must be mentioned is the Gavarnie-Ordesa circuit. The consensus is that, if you had to identify a single best route, it would be ascending above the extraordinary Cirque de Gavarnie, crossing the high range through the famous Breche de Roland and descending into the tremendous limestone Ordesa Canyon, then climbing back up to the high peaks and trekking along the Haute Route for a bit or circuiting back to the Gavarnie area.

Vignemale - the biggest mountain in the entire French side of the range (at 3,298m), with fine walking in the surrounding French and Spanish slopes - in particular in the vallée de Gaube to the north - and an ascent of the mountain itself. Think granite and high lakes. This area deserves its own page, which we are working on.  Please help us with ideas and photos.

The Ordesa and Monte Perdido Area, a network of rightly famous canyons and a World Heritage Site.

-          Faja de Pelay - a famously giddy balcony walk high up in the huge southern cliffs of the Ordesa Canyon.

-          An ascent to the dramatic Breche de Roland  is unmissable. Consider extending this to make a great multi-day walk such as the Garvanie/Ordesa Circuit.

-          Pineta Valley - Adjoining Ordesa to the east (also part of World Heritage Site) is wider than its neighbouring canyons but with huge crags to its north, the border-ridge with France. Glacier-carved, it still retains some ice-cliffs in the face of Monte Perdido. The tough ascent to Lago de Marbore is said to be superb (11km), so it the Llanos de la Larri.

-          Anisclo Canyon -  Adjoining Ordesa (also part of World Heritage Site). Classic limestone canyon, running due south from the Monte Perdido massif. It is less easily explored than Ordesa and consequently less famous, but its very different character (narrower and perhaps more numinous) will reward the effort. On the rim is Mondoto with super views into the canyon and across to the high Pyrenean range.

-          Garganta de Escuain - a superb (if less famous) gorge between the Pineta and Anisdo systems, shockingly narrow and high-walled.

Garmo Negro (2066m) - big peak, big views across the neighbouring mountains. And a fine if rough scramble along the ridge to Argulas (at 3046m).

Valle de Tena: Can follow GR11 - to Refugio Respomuso, nestled among some of the range's highest peaks.

Posets Massif: wonderful. Pico Posets is the highest regularly climbable mountain in the range, at 3,375. This area deserves its own page, which we are working on. Please help us with ideas and photos.

Maladeta Massif: particularly beautiful. This area deserves its own page, which we are working on.  Please help us with ideas and photos.

Aigues Tortes - a lovely area of winding lakes and mountains on the Spanish side of the range. Very rugged and remote. This area deserves its own page, which we plan to work on.  Please help us with ideas and photos. All camping is forbidden here.

We are preparing an Eastern Pyrenees page for more on the varied and fascinating walking at the eastern end of the range, within striking-distance of the coast. Please help us with ideas and photos.

You will be unlucky not to get gorgeous clear days for the majority of a summer expedition.  Snow lies late, with the high range only really clear by mid-July. July and August are the best months for tackling the high range, with clear(er) passes and better (less unpredictable) weather. September can the best month of all, with clear day and fewer people, although it gets colder at night and the chances of snow increase toward the back end of the month. Be ready for any weather at any time, though, in the high mountains.

Parts of the range really heave with tourists in high summer (Gavarnie especially), and many day walks are busy at that time.  So, come prepared to tolerate or to look for remoter walking. May and June (if you are happy not to have access to the highest paths) and September are accordingly the best times to come.

Accommodation varies from hotels and inns to camping in the valleys.  Once on the high ground, the array of fine refuges are the main option - although they get busy, so book well ahead if coming in the popular months.  Camping is very restricted in the high country, so check out the current requirements at the planning stage. See our Practical Information section for more information.

Mention must be made of one particular guidebook, Cicerone's Walks and Climbs in the Pyrenees which you should not approach this area without. See our practical information section for more books.

Rupert de Borchgrave told us about an amazing-sounding walk he did in 2016, mainly on the Spanish side of the range.

"A friend of mine told me about your website https://www.walkopedia.net/100-best.asp

So I thought you might be interested to read about the trek I made through the High Pyrenees last year for the charity MIND. It’s a longer walk than your Gavarnie-Ordesa listing (#26= in your top 100), 300km from Pica d’Estats in the East to Balaitous in the West and took 23 days (+ 5 rest days). But if you know the Pyrenees, then you might find it inspiring. There is an explanation, then the details of the route divided into 23 etapes, and photos at the end.

Dear Friends, To those of you who sponsored me to make this trek through the High Pyrenees: THANK-YOU. https://www.justgiving.com/fundraising/Rupert-de-Borchgrave

Over 28 days I walked from Àreu in Catalunya to Arrens-Marsous in Béarn, and climbed solo to the summits of 10 of the 11 massif peaks of the range. Having lost some days to weather, injuries, and disintegrated equipment, I could not take the detour to Pic Long, which lies some distance off the main route of the other peaks, and was also advised that the rocks along the crest ridge are unstable and dangerous to climb solo. Five rest days aside, over 23 étapes, the 300km route involved an average daily denivelation of ~1200m up & down. Lest anyone think that peak hopping is as languid as island hopping, even as I became fitter towards the end, I was still gasping for..... 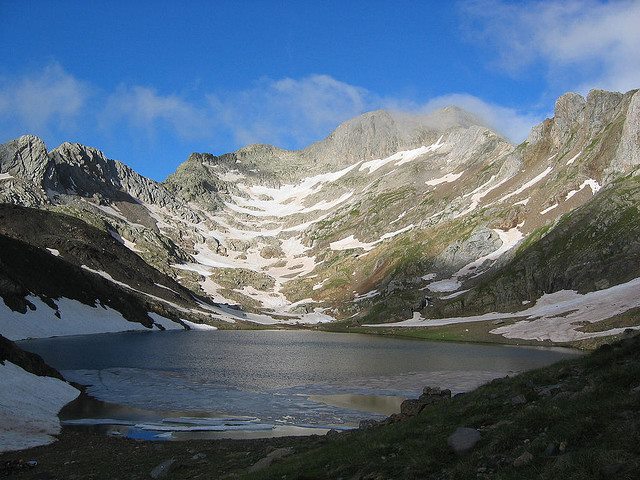 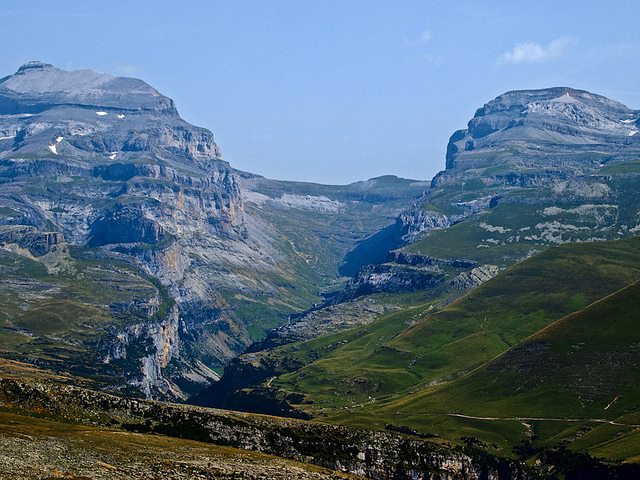 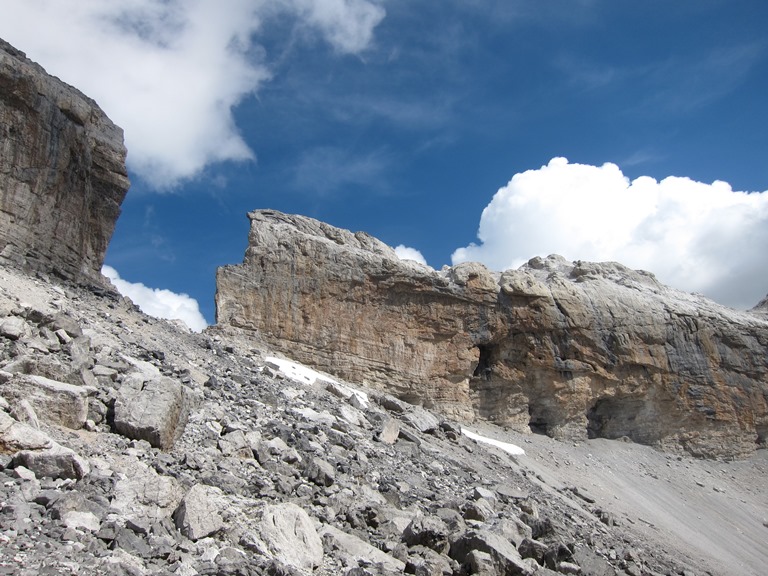