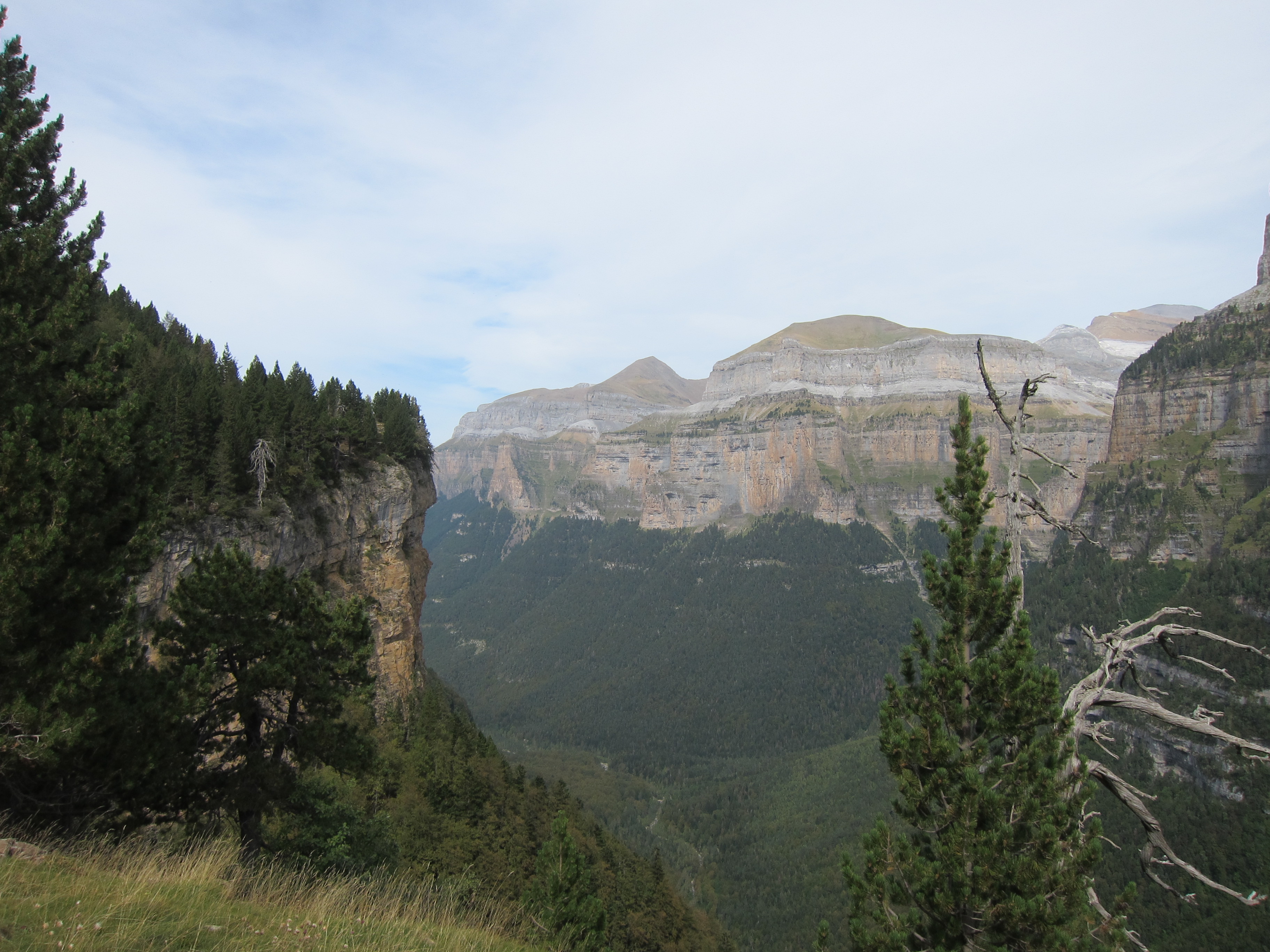 The Ordesa Canyon, just south of the high and sheer wall that divides France and Spain in the central Pyrenees, is walkers' heaven, a 15km (or so) long, extraordinarily evenly proportioned glacial gouge running pretty well straight for much of its length through the prevailing limestone, in place 1,000m deep and lined on both sides with huge and dramatic cliffs. It truly is a majestic and inspiring sight, from all angles.

Whereas the highlands behind its rims are sparse semi-desert, the interior of the canyon is a very different world, a lusher mix of grassland at its top end and pine forests (lonely little people struggling with the elements higher up, statelier citizens further down) carpeted with ravishing vegetation and interspersed with lovely mixed deciduous woodland, which becomes predominant further down. Wildlife includes sorrios (chamois) and 31 other mammals species as well as a huge selection of birds.

The canyon is undoubtedly one of the Pyrenees' finest walking areas. You can make a combination of routes over several days of you want.

- a fine trail (a section of the great GR11 route) follows the length of the canyon bottom, right up to the great waterfall at its head. This is lovely and easyish walking, and is getting on for 8 km one way from the la Pradera carpark inside the canyon. From the waterfall it is around 2km (and some step climbing up the canyon wall) on to the Refugio de Goriz.

- the greatest walk must, though, be the Faja de Pelay, which follows an extraordinary balcony in the upper cliffs for some 8 km from the head of the canyon to the incredible viewpoint around two-thirds of the way down, when a steep, 600m ascent/descent must be made to/from the valley floor. Spectacular, dramatic, magnificent, thrilling, awe-inspiring: those overused words really do apply here.

- a more challenging cliff walk is the Faja de los Canarellos, which winds (in places giddily) around the central northern cliffs.

"Faja Racon (11 km, 580m ascent, 5-6 hours): This path under the northern cliffs is overlooked by many visitors. You really get close to the cliffs walking directly underneath them and get an idea of the scale of the valley. There's a lovely contrast between the bare rock of the cliffs on your left and the lush green woods sloping away to your right. There's a good chance of spotting sarrios on this route as well as lammergeier.

Faja de las Flores (16 km, 1150m ascent, 9-10 hours): A spectacular path a kilometre high on the northern cliffs needing a very good head for heights. A steep path ascends over a thousand metres passing two sets of "clavijas" (iron pitons) on the way. At first there looks no place for a path but as you get closer the eroded band shows itself and you can see it winding its way along the cliff face. At only a metre or so wide with a 400 metre sheer drop to your right at all times, this is not a route for the faint hearted. The traditional descent passes across a cliff face by using an extremely scary set of chains and pitons. Those that don't fancy this can turn round and head back down the way they came. A superb hike."

- there are superb walks along both rims. The northern options are a long way from civilization and are best accessed after a night in the Rifugio de Goriz - but are varied and empty. A climb or circuit round 2,769m Punta Tobacor high above the north rim looks particularly appealing. The relatively flat southern rim's routes are manifold, with views back across the canyon to the high peaks of the border ridge, and can be accessed from Goriz or from high roadheads at Fanlo and Nerin, or for the masochists from much lower near Torla. The Pico de Enmedio (at 2,133m), with five different approaches, is a natural target.

There is endless choice about what else you could do. A lot of walking can be fitted in in the Ordesa/Monte Perdido  region, and you can of course head on to France to make the Gavarnie/OrdesaCircuit, one of our Top 100 walks. You could spend one or more happy days walking from the Goriz refugio, perhaps climbing the tough but magnificent Mont Perdu/Monte Perdido, the second-highest peak in the entire range, or teetering on the north or south rims as mentioned above.

Be ready or rain at any time, although you will be unlucky not to get mainly gorgeous clear days in summer and early Autumn. Severe Summer thunderstorms are a regular feature which require immediate descent away from maximum exposed areas, and summer is often very hot. Snow lies late, with the high range only really clear by mid July.

Parts of the Canyon heave with tourists in high summer, and many day walks are busy at that time. So, come prepared to tolerate.

You can base yourself at or near the pleasant Torla to the south of the canyon?s bottom. In the high ground, accommodation comes down to the refuges and some camping - although they get busy (Goriz is said to be the busiest in the Pyrenees), so book well ahead if coming in the popular months. Camping is restricted to over 2,100 m and by the refuges.

Mention must be made of one particular guidebook, Cicerone?s Walks and Climbs in the Pyrenees which you should not approach this area without.

SEE OUR SPANISH PYRENEES PAGE FOR PRACTICAL AND GENERAL INFORMATION AND MORE PHOTOS. 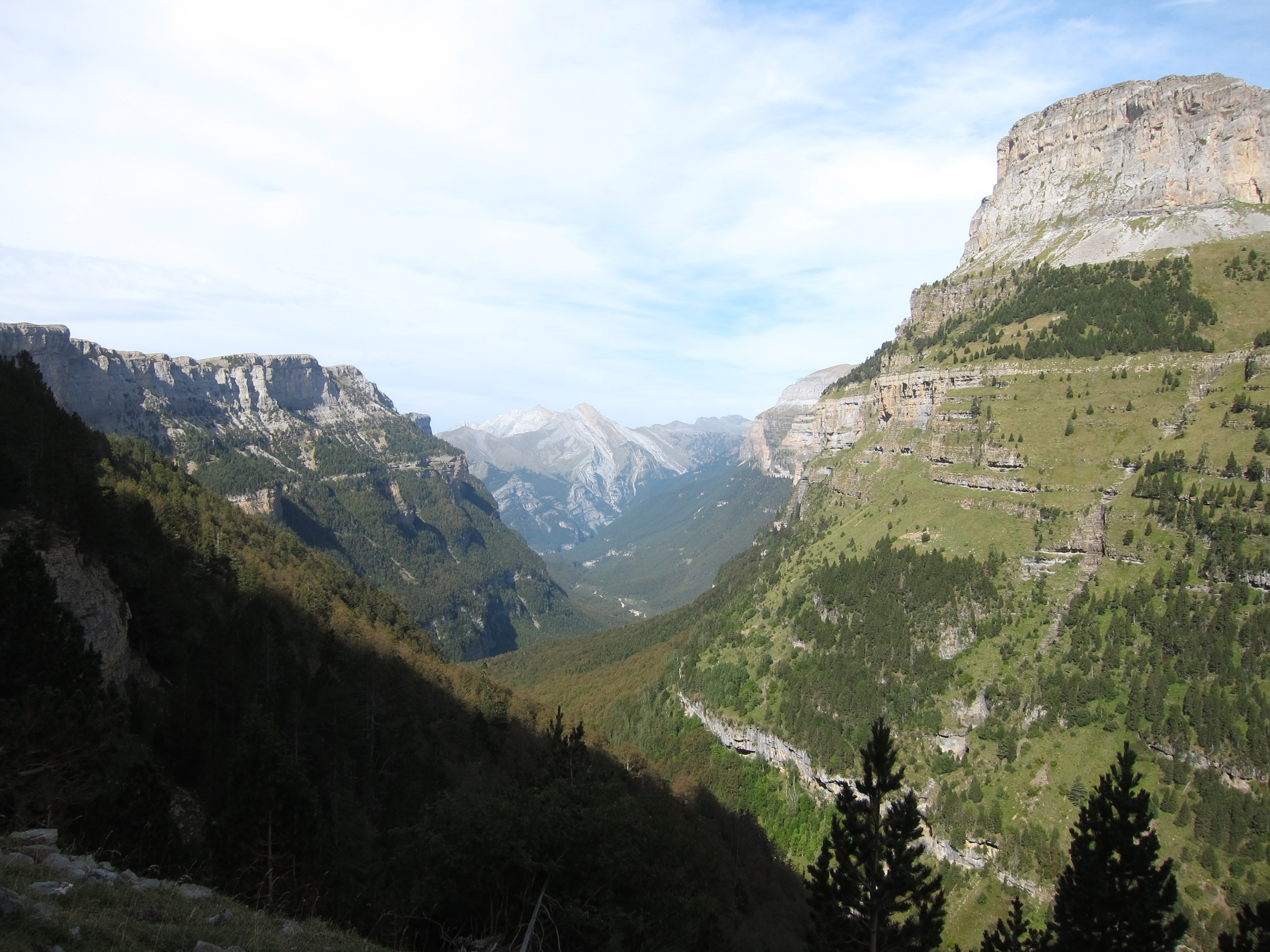 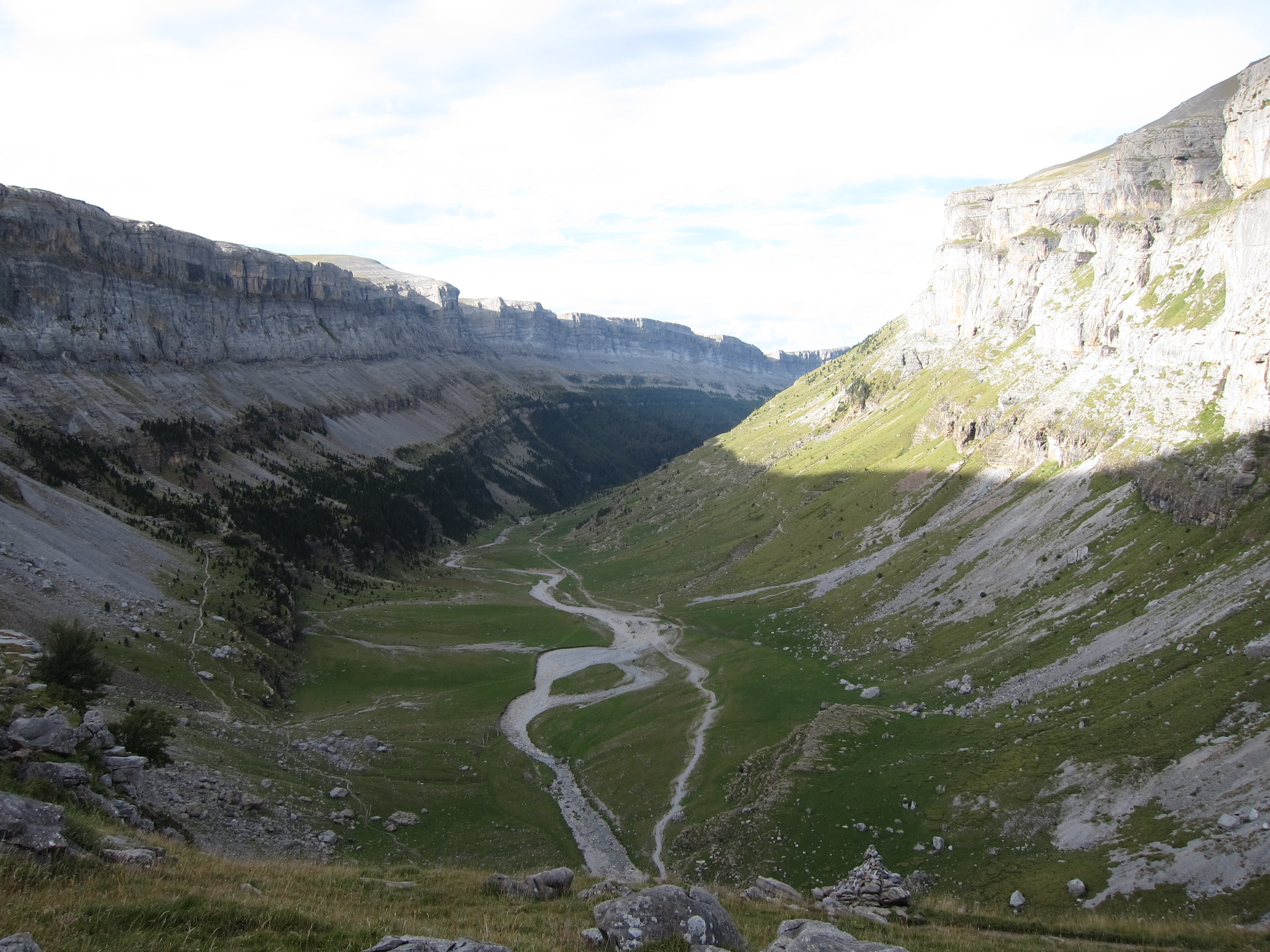