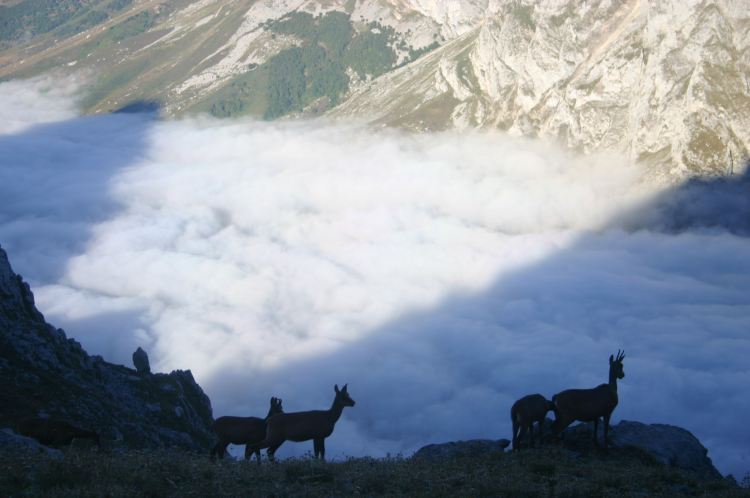 The Picos de Europa (“Peaks of Europe”) are an offshoot of the Cantabrian mountain range: an area of jagged limestone peaks (said to be the “largest single mass”, over 2,000m thick in places, of limestone mountains in Europe) 20km inland from Spain’s northern coast. It is generally assumed that the name originates from the fact that they would be the first sight of landfall for travellers crossing the Bay of Biscay from America: Cantabria’s capital, Santander, was the primary jumping-off post for the Americas for many years.

The area has been inhabited (as evidenced by a large amount of cave art) since Paleolithic times, and has been consistently farmed for the past 5,000 years, producing a landscape of meadowlands, forests and tiny summer-pasture villages, their lush plateaux isolated from each other by giddying river chasms and overlooked by stern, precipitous peaks. Above the meadows and forests is a harshly beautiful world of ice-cracked cliffs, spires, towers and scree. Think Dolomites. In the summer, the upper meadows resound to the music of bells from livestock brought up from the valleys; in the winter, the villages are almost entirely deserted, the plateaux mostly cut off by snow.

The Picos saw Romans building roads to help conquer resistant Celts, and the Moors’ first defeat in Spain. There has been a lot of mining, with old shafts in ludicrously inaccessible cliff-faces and some disfiguring spoil – but this has left a lot of walkable tracks.

A national park since 1918 (and Spain’s first), this area has remained delightfully unaffected by modernity and Spain’s tourist trade. Many locals still have no language other than their own, and much agriculture is still carried on without the benefit of machinery. As a result, the area has a stunning array of flora and fauna and is home to endangered species such as the Cantabrian brown bear, the Iberian lynx, wolves and the delightful local Cantabrian chamoix (the rebeco), as well as huge vultures, choughs, buzzards and a diverse population of butterflies.

The walking here is as good as it gets. While there can be tough slogs and scrambles to and from the high ground, the high plateaux can contain easy tracks over pastures or cracked rock surrounded by towering peaks and spires. New vistas open up repeatedly as you turn corners, cross ridges or rivers or emerge from ancient woods. An alpine-style idyll at its best.

There is a multitude of fabulous walks, ranging from a few hours to multi-day hikes from refuge to refuge. Some of the very best (all in the high country) are the following:

The Central Picos Traverse, which winds across the highest parts of the central massif between the Fuente Dé cable car and Poncebos in the north in 2-3 days, passing below the famous Naranjo de Bulnes rock face. (Consider also the high traverse from the Aliva hotel to the Naranjo de Bulnes rock, climbing to cross the broken high ground which is surrounded by the central Picos’ highest crags. Note, through, that this is very dangerous – see more at our Central Picos Traverse page.)

The Jermoso Traverse, which crosses the peculiarly beautiful and dramatic western corner of the central massif.

Sotres Circuit: Another (shorter) Central Picos circuit option is to start at Sotres in the North, walk south up the superb Valle del Dudje to the Aliva refuge, take the Central Picos Traverse across the heart of the range to the Naranjo de Bulnes village and on north down the gorge above Bulnes, then swinging east across the high pastures to drop back in to the lower Dudje valley and back to Sotres. 2-3 days.

The Tour of the Western Massif, suggested by Cicerone.

The justly famous walk up the Cares Gorge, which splits the central and western groups. Crowded at popular times.

The Aliva Circuit in the central group.

Climbing the endless steep but absurdly dramatic zig-zags west of Fuente Dé to the wildly beautiful Vega de Liordes meadow some 1,000m above, then descending steeply through a gap in the cliffs to the south to circle back to Fuente Dé.

The very gorgeous Valle del Dudje links the mountain village of Sotres in the north of the central Picos with the Hotel Aliva (and thence onward if you want). A steady route up this deep valley, between stunning limestone cliffs, high ridges and summits all the way, with clanking cattle grazing the verdant meadows, which at the right time are awash with wildflowers. The final hour or so is on the rather amazing steep and narrow Llomba del Toro (Bull's Back) ridge. 3 hrs uphill, 2 hrs back.

But it is not just the highlands that will delight: the flanks and surrounding hills have endless walking joys to favour.

Other good walks include: the Rio Casano and the La Molina gorge (easy, 5km/1h30), with bonus swimming; the Bedoya valley circuit (easy, 5km/1h30), where each village comes with its own palacio; Potes-Frama-Lubayo-Collado de Porcieda-Tudes-Porcieda-Inerval de Tolibes-Potes (moderate, 13km/4h), which goes through some of the area’s more remote villages; La Ruta de Treviso (moderate-strenuous, 12km/5h), an old mining trail to an isolated village with some tough sections with spectacular views; Puerto san Glorio-Cosgaya (easy, 10km/2h50), a straightforward walk through high country (pass closed May-November) affording spectacular views (best to park in Potes as the start and end points are not linked by bus).

Actually, you can pick any number of promising-looking walks from the map and almost certainly not be disappointed, be it on the flanks of the high Picos or in the foothills. For instance, Walkopedia made a wonderful half-day walk to the vega below Mofrechu to the north-west of the main Picos, enjoying exciting views from a high ridge, after having to give up getting to Lago Ercina as a result of access crowding. Another, picked at a random as the author writes is the ridge to 1,798m Pena de Dobres from the Punto de Panderrudas on the road south of Cain. Our mouth is watering so much, we’ll need to come back again!

This is high country, exposed to Atlantic weather; rain is common, trails can get cut off by snow in winter, and the area is famous for sudden and dramatic mists.

There are various ways to cross the central Picos de Europa massif; this version has been refined by climber and adventurer Geraldine Westrupp.

You start in the lovely and unspoilt village of Espiñama a few kilometres down the valley from the roadhead and cable car station at Fuente Dé, heading north up a small road, then up steep tracks through delightful mixed forest, catching occasional glimpses of pastures and approaching cliffs and high country.

After a couple of hours, you reach the red-tiled..... 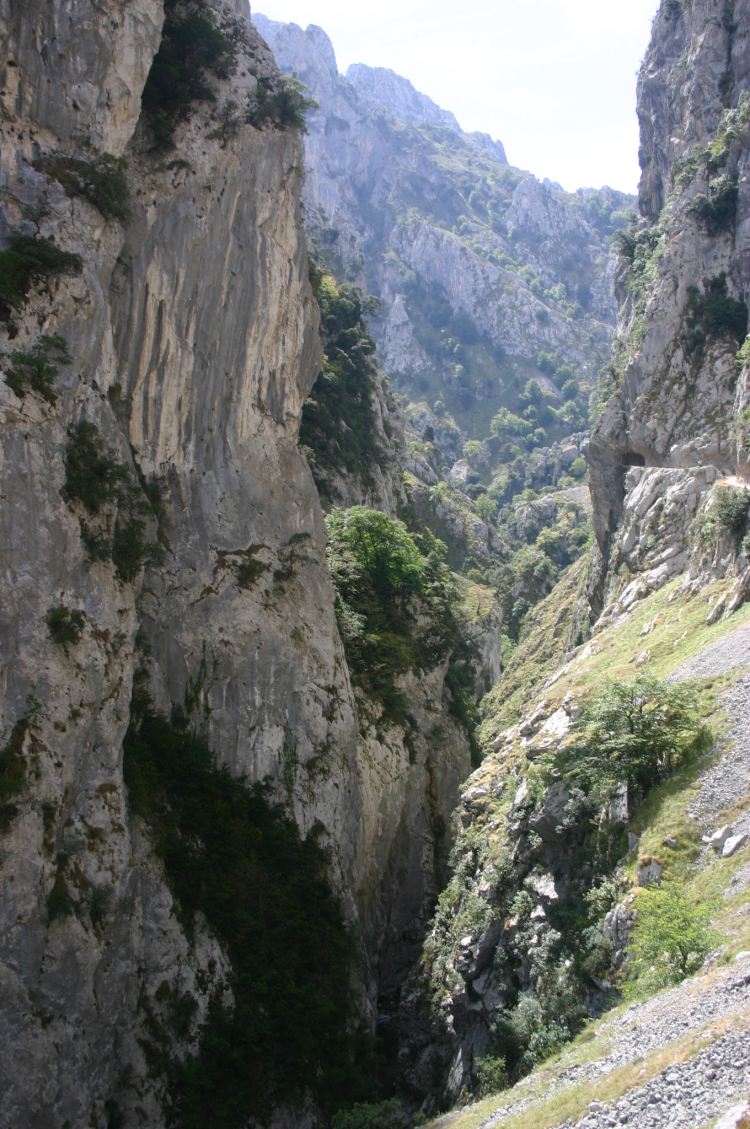 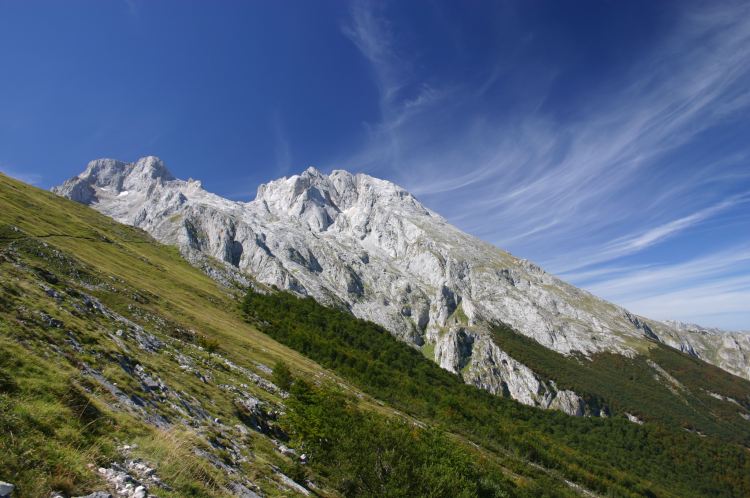 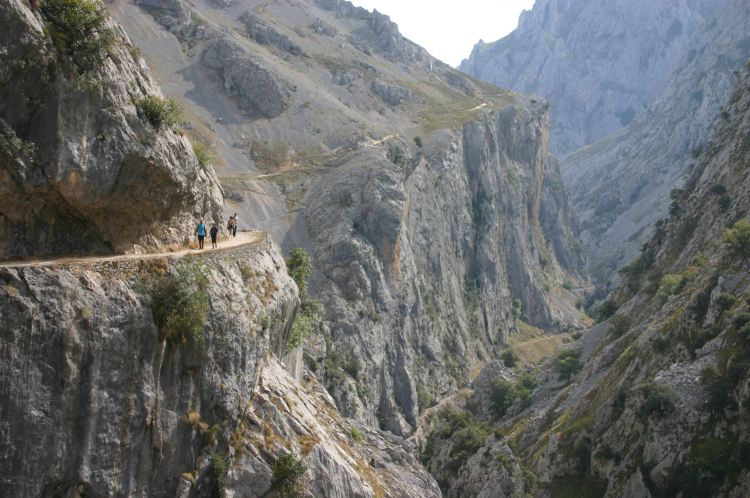