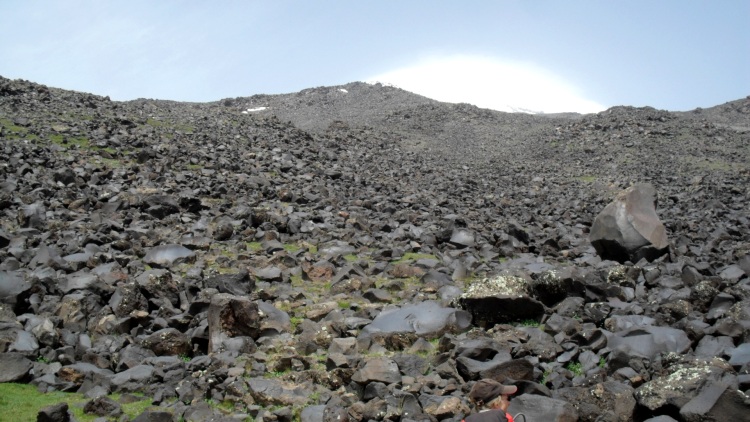 Meadows give way to rock and snow higher up.  It can be forbidding and bleak.  And very cold. And cloudy or even wet.

The following is Mark Daley’s piece on walking here. Thank you, Mark, for bringing this walk to our attention!

Mount Ararat (Ağrı Dağı in Turkish) is a dormant volcano which towers up 5137 metres in the north-eastern corner of Turkey, close to its borders with Iran and Armenia. It is a highly militarised region: Ararat was only opened up for tourism in 1998, and permits are still required from the Turkish military: your guide will obtain these. Ararat is climbable, subject to the weather, in a four day trek beginning above the military town of Doğubeyazıt (a Turkish equivalent of Aldershot soon renamed Dog Biscuit by our group) consisting of a trek to a lower camp at 3200m, an acclimatisation sortie up to the higher camp at 4200m and back again, the permanent climb to the higher camp, and then on the fourth day the assault on the peak and a descent which, depending on your stamina, is either 2000m back to the lower camp or 3000m back to the point where the minibus takes you back to Doğubeyazıt.

A significant challenge in climbing Ararat is the temperature range. On our trip there, at the beginning of August, the effective temperature at the windy summit was about -20C after which we dropped down to the base where it was probably 35C. Given the luggage limitations of a four day trek with mules in a remote region, packing for a 50C+ temperature range involves compromises: it is unfeasible to take a lot of heavy gear for the sake of one day. The best answer is probably to take layers, including a fleece and ideally a down jacket, and a properly waterproof outer layer. Our trek up to the lower camp was during two hours of almost constant thunderstorm with no prospect of shelter, and the inadequacy of our waterproofs would have been a serious issue if it had not been bright sunshine the next day, allowing us to dry things out. This was made worse because our bags, being carried by the mules, had not been covered up and were saturated. Because of the weather risks, the final ascent usually begins before dawn, and can be as early as 3 a.m. and your first hour or two are spent negotiating snow-covered boulders and rocks by torchlight. You will need crampons, which can be supplied locally.

Ararat is a bleak and unforgiving high Alpine region, with little vegetation above 3000m and snow cover above 4600m, if not lower. The rocks are igneous, with a great deal of fragmented black obsidian, some of which forms huge boulders which lie in rubble-strewn fields such a distance from the peak or the nearest cliff, that one wonders whether they rolled down or were ejected: both are possible. The last eruption is thought to have been about 2500 years ago.

There is a terrible dark, brooding, oppressive grandeur to Ararat's higher slopes which gives the relatively pasture-like lower regions a contrasting charm of their own. On a clear day the views from the top are inevitably vast and inspiring, although we did not want to stay up there because we were at risk of being enveloped in a bitingly cold white-out. It is not a technical climb requiring ropes, but neither is it a cake walk, and the weather can change quickly from benign to menacing.

As for Noah, we found no trace of his elusive ark, but it may be lying crushed underneath a field of volcanic obsidian. There is a Museum of Noah's Ark somewhere in the region where you may be able to buy a splinter of the True Ark: we resisted the temptation.

Ararat is best done after some limbering-up at lower altitudes. We combined it with a trek in the Taurus Mountains (q.v.), which are almost deserted, warmer, and frankly more attractive, and also some time in Cappodocia (q.v.) which is an astonishing landscape which should not be missed. Ararat is however the tallest mountain in Turkey and since it rises past 5000m metres, conquering it has a certain trophy significance, and there no little amount of satisfaction to be gained from scaling its bleak summit.

The main issues to overcome before embarking up Mount Ararat lie with permits and tour fees.  It still lies in a heavily militarized region of Turkey. Permits can take up to 30 days to attain via a Turkish travel agency, and all inclusive tours start at $450 for a three day trek to the summit.

This is a very demanding high-altitude trek on a treacherous mountain.  Come properly prepared.

In order to acclimatise properly, it is recommended that you take four days to complete the return trip. Be sure to pack for contrasting temperatures: it can be 35ºC at the foot of the mountain and -20ºC at the summit during the summer months.

A short walking season – July to September. Given the altitude, you would do well to do some acclimatization first (e.g. in the Taurus Mountains).

We want to tell more - please send us your ideas, suggestions, experiences and photos. THANK YOU! 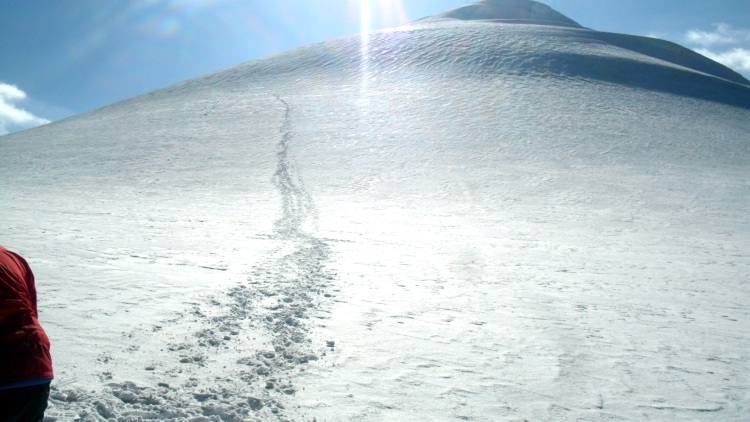 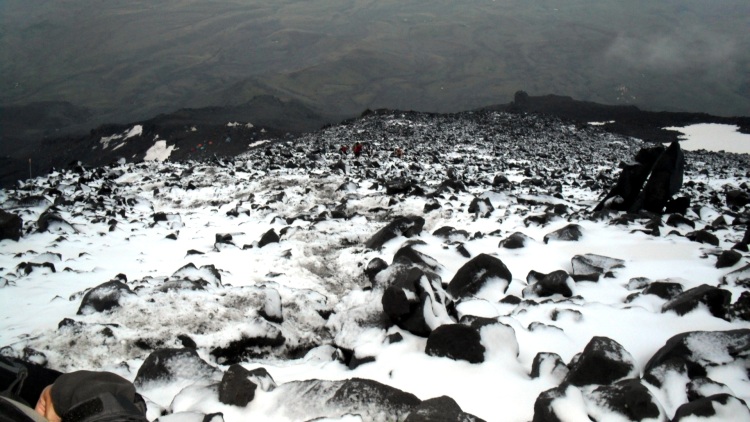 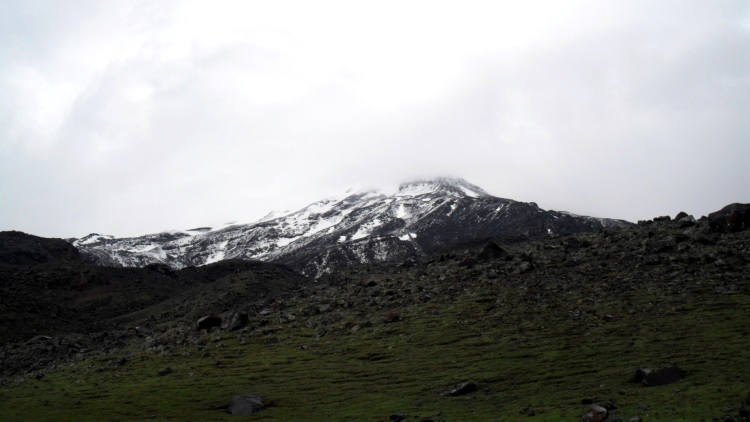