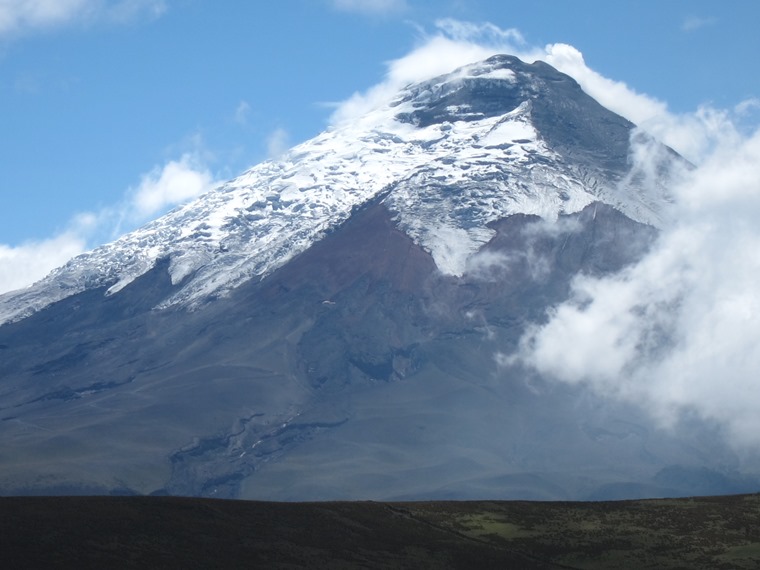 Cotopaxi is special. It is not only (at 5,897m) one of the highest (it used to be claimed to be the highest) active volcanoes in the world, but it is a superb, classic, symmetrical conical stratovolcano, with a 22km diameter at its base, which soars above the surrounding landscape, its snow-capped peak visible for miles around. It is (sorry) iconic, and one of the world's best-known volcanoes.

Von Humboldt described Cotopaxi as "the most beautiful and regular of all the colossal peaks in the high Andes. A perfect cone covered by a thick blanket of snow that shines so brilliantly at sunset it seems detached from the azure of the sky."

Cotopaxi sits in 33,400 hectares of scenically magnificent and geologically fascinating national park, which takes in the great majority of its slopes as well as Cerro Ruminahui to its north, and some lovely paramo, lakes, gorges, valleys and lahar planes; and Inca ruins to boot. The peak protects biozones ranging from montane forests (fringe cloud forests) to shrubby lower paramo and classic higher tussocky paramo grasslands.

Animals include puma, shy deer and paramo rabbits, as well as wild horses and llamas. Bird life is hugely varied, from caracaras and other raptors to water-birds on its lakes. Walkopedia had a good viewing of a hummingbird on its lower slopes.

Cotopaxi has been hugely destructive in the past, having erupted 50 times since 1738. The beautiful snow and ice inbetween times enhances the damage: it famously sent a lahar (mix of ice, water, mud and rock) down the valleys all the way to the Pacific in 1877. It was intermittently active in the C20, and reignited in 2015. Check the current status before laying plans.

It isn't just Cotopaxi: the landscape is a volcanology text book: parasitic cones, post-lahar plains, lava flows galore and, many km to the north-west, huge boulders flung all the way there. Ruminahui to the north is the remains of a much older collapsed volcano.

Cotopaxi is so big it makes its own weather. You can be gazing in awe at its northern flanks and cone while the south is wrapped in cloud.

A keen walker must get to this area if possible. While peak baggers will flog up Volcan Cotopaxi itself, there are a multitude of gentler (but usually not that gentle) options in the area. That said, a gripe would be that off-path walking is forbidden, and maps aren't great so it can be hard to identify options as easily as in (say) much of Europe. And Cotopaxi is loved and heavily visited, so don't expect to be alone at popular times around, say, Laguna Limpiopungo and the Jose Rivas refuge. You can, however, get away from the great majority on other trails.

Cerro Ruminahui (4,712m) : This line of jagged peaks was once the south-eastern side of an ancient volcano. It now forms the north-western third of the Cotopaxi NP. While the huge views of the Avenue of the Volcanoes, and directly into the heart of Cotopaxi itself, are really thrilling, you don't have to climb to the high ridge to have a fantastic walk: there are excellent walks on the lower slopes.

Cerro Sincholagua (4,873m): This dramatic mass of broken rock, yet another extinct volcano, soars above the paramo of its wide-spread lower slopes some 17km north-east of Cotopaxi. It used to be glaciated and ice capped, but the permanent ice is long gone. You can drive (in 4WD) on tracks from the Control Norte of the NP, or walk in from there.

Marurco/Guaga Cotopaxi: You could climb this minor peak on Cotopaxi's southern flank (at around 4,840m). The Viva guide has some ideas. A long day.

There are plenty of lower walks (well, relatively lower - nowhere is below 3,800m or so once you are in the heart of the area) to enjoy. Here are just a few ideas:

The well-known Condor Trek, which spends its second half in the NP, is recognized as one of Ecuador's great walks.

A major (and the best) relatively lower-level walk within the NP would be a Cotopaxi Circuit/Loop, which will give you a fascinating insight into the area and superb panaramas.

Laguna Limpiopungo circuit: this pleasing marshy lakelet at around 3,800m with its rich bird life and quite likely wild horses on the meadow to its north. Divert up tracks into the gorgeous paramo of the hillsides. 1hr++. Head on up to the flanks of Ruminahui and/or cross the paramo hillsides north-east to the Tambopaxi hotel.

Walk from the track-head to Refugio Jose Rivas, at 4,800m. 200m of climb, enough to give the less-acclimatised a headache to remember. Near the snow line.

Ingaloma ruins: we think it should be possible to walk to the interesting-sounding Ingaloma Inca ruins to, for a fine day walk - but there is little information available. Anyone have any ideas/photos?

Important: Cotopaxi became active in 2015, after a dormant period. The area around it was closed for several months. Given its destructive capacity, we recommend you take care and check the latest position before laying firm plans. 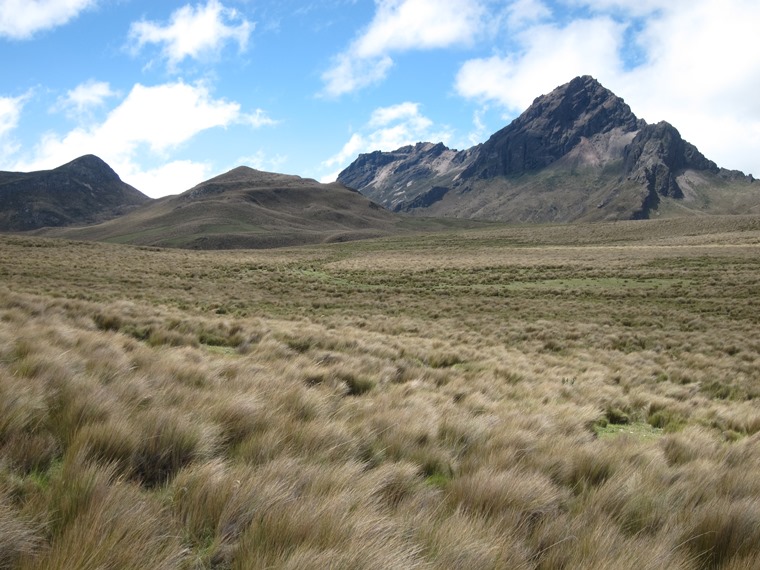 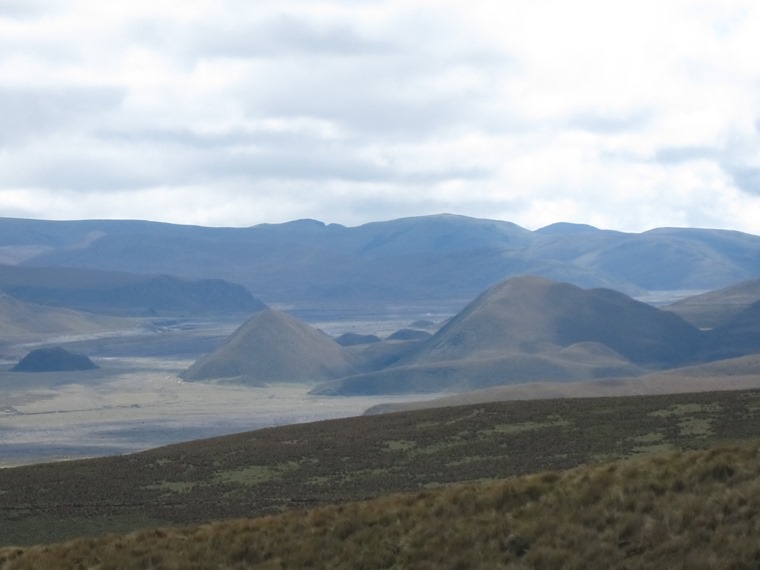 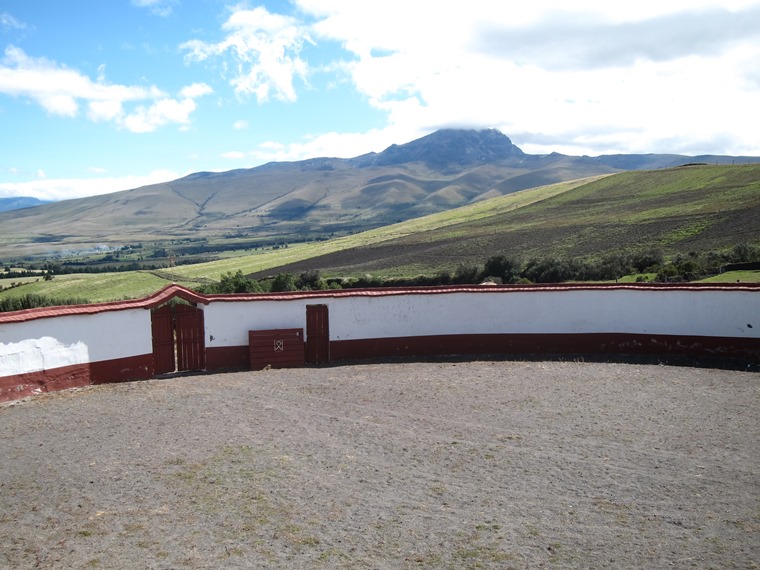