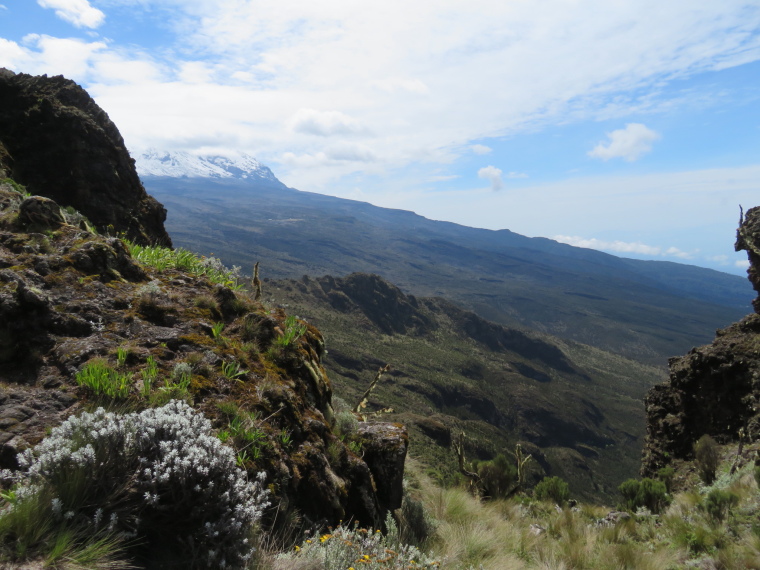 The roof of Africa, and the highest free-standing mountain in the world:  Kilimanjaro is spectacular, romantic and a famous “bag”; but huge numbers of climbers make for crowding on the popular routes at busy times. You will feel triumph and exhilaration if you are one of those who reach the peak, which your altitude misery will not wholly ruin.

The Lemosho and Shira routes climb onto the remarkable Shira Plateau in Kilimanjaro’s west, and meet at Shira 2 Camp to link into the Northern and Southern Circuits, to lead walkers round to mass of the main Kibo summit, to the ascent routes to the east and south.

This makes the Lemosho Route the longest/slowest possible approach, if you then take the Northern Route, meaning you have a much better chance to acclimatise and get the best out of an amazing but extremely demanding climb than on other, more direct, routes.  It is also significantly less crowded that the well-known routes.

The ‘normal’ Shira Route is the same number of days as the popular Machame, and starts quite hight, so, while relatively empty, actually isn’t a great option for acclimatisation if you are heading for the summit. It would be a  good option if time is short and you want to get high quickly and have a night or 3 in the mid-levels to experience Kilimanjaro’s many marvels. But, even then, you might walk up the Lemosho and drive back down the Shira from the Morum Gate.

You will climb through some of Walkopedia’s favourite vegetation zones: dense (and often wet) rain-then-cloud forest on the Lemosho Route (the Shira starts higher) full of competing trees, including podocarpus, fig, hagenia and tall and spindly giant heather at the higher end, with giant ferns, thick undergrowth and flowers in clearings, including the beautiful elephant head and trunk-shaped and impatiens kilimanjari; damp giant heather festooned in trailing lichens with views out to the billowing tops of the clouds over the lowlands; gorgeous scrubby moorland; the alpine desert. (You don’t attack the summit on these routes - see our Kili Summit page for more on the summit area.)  You will catch spectacular views across a region of natural wonders and you should spot animals of interest - eagles and buzzards will soar above but bigger game is scarce, unlike on neighbouring Mt Meru. Smaller antelope and leopards are there in the forests but you will be lucky to get a glimpse, while you may see colobus and blue monkeys and sunbirds, hornbills and turacos. You might also see the adorable Kilimanjaro shrew and chameleons at higher altitudes.

The Shira Plateau is an extraordinary place, the caldera of the massif’s collapsed first volcano filled in by millions of years of eruption and erosion from the youthful Kibo. The broken remains of the southern rim are the clearest evidence of what this is – the northern counterpart has long been overwhelmed by the growth of Kibo. Its vegetation is an important part of it glory: vivid, ravishing shrub-land, widely spaced to aid appreciation of each individual specimen, from elegantly sculpted junipers to bright yellow bushes to a mixture of harmonious greys. And seldom obscuring the views, most notably of Kibo looming in icy splendour – when not lurking in its cloudy tatters.

There are various campsites on the plateau: both routes involve two nights up here, including Shira 2.  You have a night in the lower forest on the Lemosho Route.

There are some excellent side walks from the main plateau campsites:  to the amazing views at Shira Cathedral (estimates of the Cathedral’s altitude vary wildly, from 3,720m to 3,900), high (4,600m) Lava Tower and Moir Hut (on day 1 of the Northern Circuit). Most Lemosho walkers take in Shira Cathedral on day 3, en route to Shira 2 Camp.

Cost/timing: walking on Kili costs a lot, which means people try to keep their climb short. But you are most likely to suffer from altitude sickness if you take the more direct routes, with often dire consequences for acclimatization and thus enjoyment – and, indeed, safety – and a greater risk of not making it to the peak. Ie, our advice is to take a longer route if your time and finances allow. (Remember that cost savings tend to come out of the pockets of the support team, so ethical travelling means avoiding the very cheapest options.) See more on cost and walking options at our Kilimanjaro Massif page.

Day 1: To Forest Camp (2,650m) – km, 3hrs or so. By the time you’ve driven in and your team are packed, you are unlikely to be walking before lunchtime. Then it is a steady climb on a good path through attractive, impenetrable forest, thick with creepers twining through low bush below stately straight-trunked trees. The trees open out in places as you get higher, allowing glimpses of huge vistas down across the plains far below. The Forest Camp appears at the top of a final slope: a narrow but flat ridgetop which will be stuffed with tents.

Day 2: to Shira 1 Camp (3,550m) – 6 hrs or so. Today is mainly a quite demanding steep slog up the outer slopes of the old Shira caldera. Climb for an hour or so through really lovely varied, dappled forest. Yesterday‘s jungle has thinned to more stately trees,  spread more widely, and thick lower undergrowth: this is proper cloud forest, with a goodly assortment of lichens and mosses. The forest ends quite suddenly, with a brief intermingling of trees and heathery shrublands, with vast views back west over the slopes and plains below. The next three hours are an undulating traverse then a slog up a long, steep ridge, then a steady traverse around the ridge-end to find Kibo looming across the huge, gently sloping Shira Plateau basin: a moment of visual glory. A steady march gets you to the Shira One campsite, which is likely to be thronging.

Day 3:  To Shira 2 Camp (3,840m) via Shira Cathedral – 6hrs or so. The direct walk between the camps isn’t that long, so moat people take in an acclimatization walk such as wonderful Shira Cathedral (3,900m), a short ridge high on the southern caldera rim. The walk across the plateau really is gorgeous, gradually climbing on a good path which winds through vivid, ravishing shrub-land, climbing the Cathedral’s lower slopes to a narrow col where you meet your first view along the southern slopes of the great massif. The summit ridge commands wonderful views across the southern plains around Moshi some 3,000 metres below, with Kili’s twin volcano, 4,560m Mount Meru, dominating the western skyline.The full extent – and grandeur – of the caldera is done justice from here. Then walk northwards along and behind the ridge-top towards its junction with Kibo and then slog for half an hour up maybe 200m to the Shira 2 camp on a fine platform with huge views back across the plateau. This was Walkopedia’s most enjoyable single day.

The Shira Route gets you high quickly, as its start is on the best (only) emergency route, so you drive in further and start walking at the Morum Barrier Gate at some 3,400m. It is mostly walked in two days, one shorter than the Lemosho, and you miss exploring the beautiful and fascinating forested belt. (Note – it is possible to walk from the Londorossi Gate, where you sign in and meet your porters, which will give you some forest time (and it is good forest) and some slower first-day height gain than driving, but you will be on a used dirt road.)

Most walkers head for campsites off the track, the first being the River Camp at a bit over 3,000m, or for a longer walk across the plateau to Shira 1 Camp (3,610m), if they want to spend more time in this extraordinary place and eg add an acclimatisation day such as climbing the superb Shira Cathedral.

Shira 2 Camp (3,850m) is most people’s destination, to then head on along the Northern or Southern Circuits. It is possible to head straight there on the first day, but this increases the risk of altitude problems.

The altitude will be tough on these walks, so physical fitness and preparation will make for a more enjoyable trek.

It is a requirement of the Kilimanjaro National Park to have a Tanzanian guide to ensure safety and to organize suitable camping, food and porters (you really won’t want to carry everything yourself to these heights).

Note: these walks are rated on the basis that they end at Shira 2 camp – if you want to explore without attacking the summit, these are routes you may take.

www.tourdust.com organise a Lemoshso expedition: we travelled with Tourdust, and were delighted. They were very nice and flexible to deal with, and evidently cared about quality, as their walk was meticulously prepared and our support team were outstanding in every way. We are proud to be their partners.

See our Kilimanjaro Massif page for more on walking here, including attacking the Summit, and photos and further general information on Kili, including the altitude and how to deal with it!

Driving in to the start of a Kili trail is a fantastically enticing experience: from the plains, the great mass looms vast and serenely white-capped amidst its cloudy robings, its scale deceptive, above the plains and forested lower slopes.

Approaching from the west, the road begins to climb, and the lush farmland turns to scrubby grassland littered with fumeroles, then rich dark farmland patched with pine plantations, then riotous forest.

The Londorossi Gate is heaving with..... 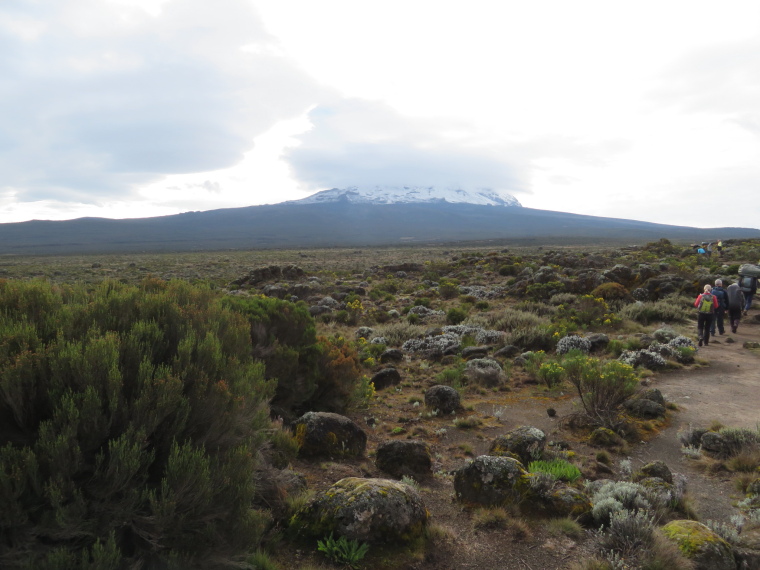 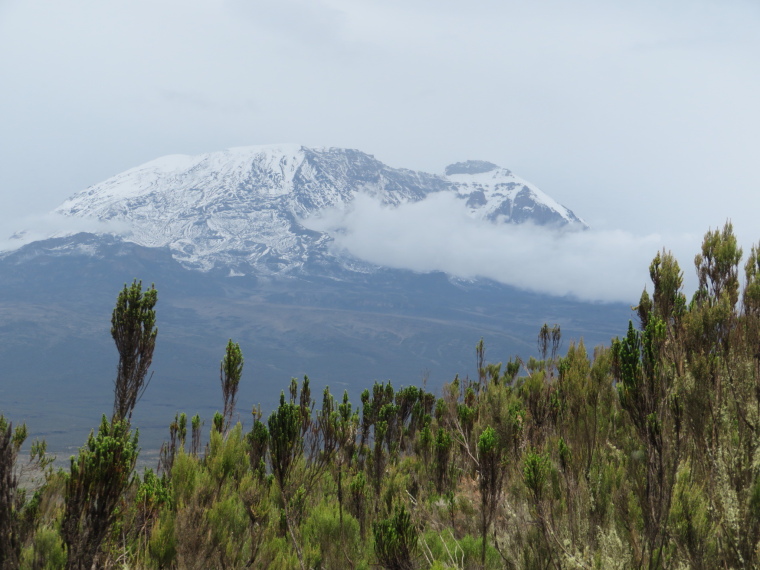