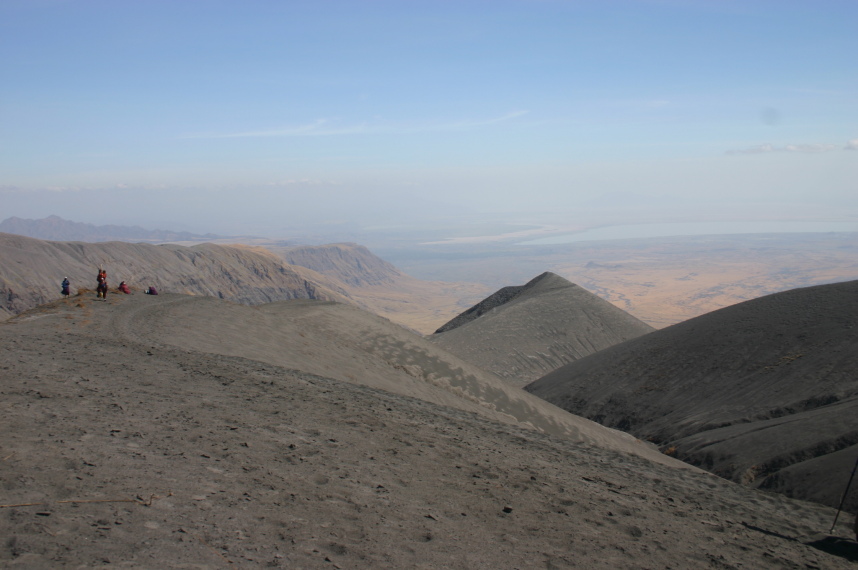 The Gregory's Rift escarpment forms the western side of the northern Tanzanian section of Africa's great Rift Valley; at the centre of this is the extraordinary Avenue of Volcanoes, and at the centre of that is the perfect cone of the 2,878m Ol Doinyo Lengai, the remaining active volcano in the area.

This day-and-a-half trek starts on the narrow ridge between the remarkable Empakaai Crater, a collapsed volcano nestling a blue soda lake ringed by tens of thousands of flamingos some 300m below the rim, and the 1,500m drop-off down to the Rift Valley floor.

Having spent a cool night on the crater rim, you walk for four hours towards the Maasai town of Nayobi, around the Empakaai crater rim and then meandering around the upper ridges of the escarpment, along an infrequently used, hot and at times very dusty (or muddy) track. On the left is the magnificent caldera; on the other, the Rift Valley slumbers far below in a different heat. Gradually, you enter the Maasai world: perhaps meeting a herd of clinking cattle on their way to a high pasture, driven by Maasai children in their red and blue cloaks and beaded wrists, then viewing their tenuous boma farmsteads and their dusty little fields from a high ridge. This is magnificent walking, although unpleasantly dusty in the dry season (don't wear contact lenses!) and very muddy in the wet times.

You descend through overgrazed pastures to Nayobi, a dusty street lined with shops, all surrounded by boma compounds.

Brightly clad and bejewelled Maasai women form a gossipy queue at a spout to fill water containers which they are going to lug painfully home, as often as not a baby dangling from their bosom. The men loiter, talking desultorily, watchfully.

We lunched in the shade of a shed, watching the numerous herds picking at the lean grazing below the village while they wait their turn at the long concrete water troughs, all utterly unconcerned with the magnificent, sinister presence of Ol Doinyo Lengai rising vast behind the further ridge.

The trail now strikes north, across the cropped pastureland, past thorn-stockaded bomas, all the time following a ridge that descends, parallel with the rift escarpment, and always overlooked by the ominous Lengai, to a beautiful wood of yellow fever trees.

A kilometer or so inside the wood, the undergrowth becomes choked with grey ash from Lengai's 2007-8 eruption; we pass an abandoned boma, its roofs collapsed under the weight of the detritus.

We found our campsite in a clearing, a cauldron from the sun on the raw ash underfoot. We read and rested under an awning, picking up what breaths of air there were. In the evening, a group of young Maasai Morani (warriors) turn up with a goat paid for by our inspired expedition organizers, no doubt which they slaughter and roast, amid banter, singing, dancing (the famous Maasai jumping) and laughter, as the dusk gathers in the forest. They are dressed in their ceremonial garb and carry their razor-sharp spears. (The blacksmiths who make them also perform their rite-of-passage circumcisions). They are in a very good mood.

The next day's walking is thrilling. After half an hour or so, the path emerges onto a network of sharp winding ridges which are all devoid of life and a weird, sickly grey courtesy of Lengai's recent huge ashfall.

The trail follows a ridge that meanders off the highlands, down toward the hazy Rift Valley bottom and the shimmering salt pans of Lake Natron in the far distance. The views across this broken, barren landscape, towards the cliffs of Gregory's Rift on the left, and straight across to the elegant curve of Lengai's pale lava slopes to the right (elegant wasteland, related to Keith Richards?), are outstanding. You can smell the volcano's proximity.

You will meet no-one, except the occasional group of Maasai patiently trudging up the long trail toward the market at Nayobi, perhaps driving a heavily laden donkey.

The trail is often powdery dust, but the hillsides are covered in a brittle crust where ash and rain have interacted. They are often very steep, and you could make a long skin-stripping slide if you stumble.

You eventually reach the broiling, near-desert valley floor, at the start of Lengai's long, steepening slope. The trail winds across watercourses of bare rock, crossing the rough plain with its parched tufts of grass and tough little shrubs. Unless you are a glutton for punishment the experience-to-discomfort ratio gets worse the further you get you will meet a vehicle by the Natron Manyara road or earlier. 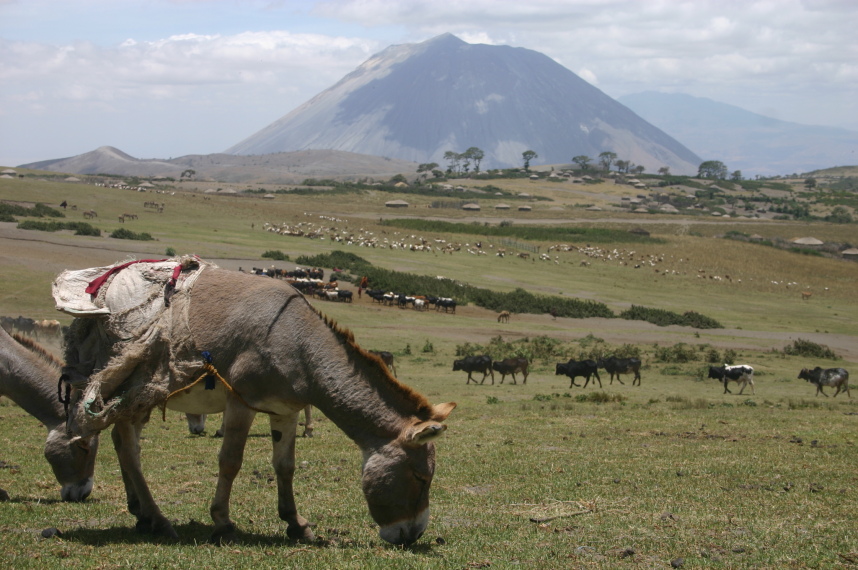 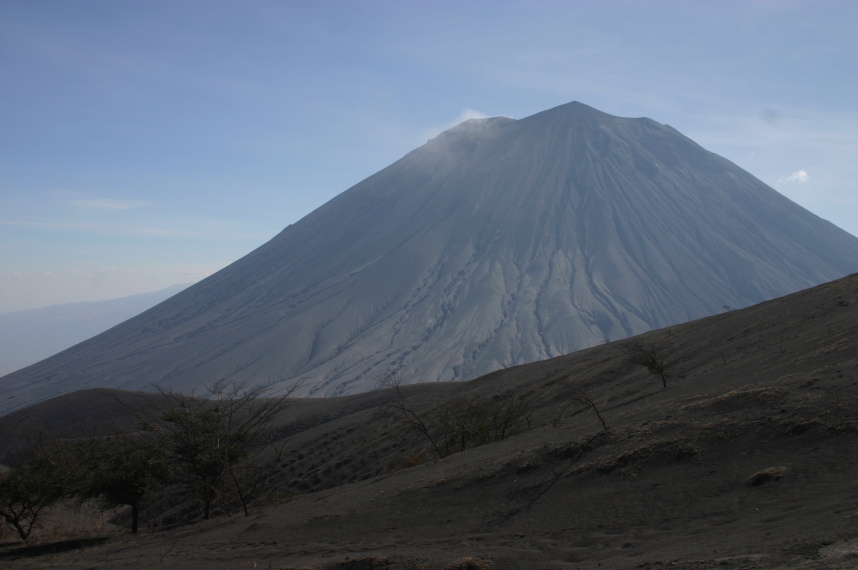 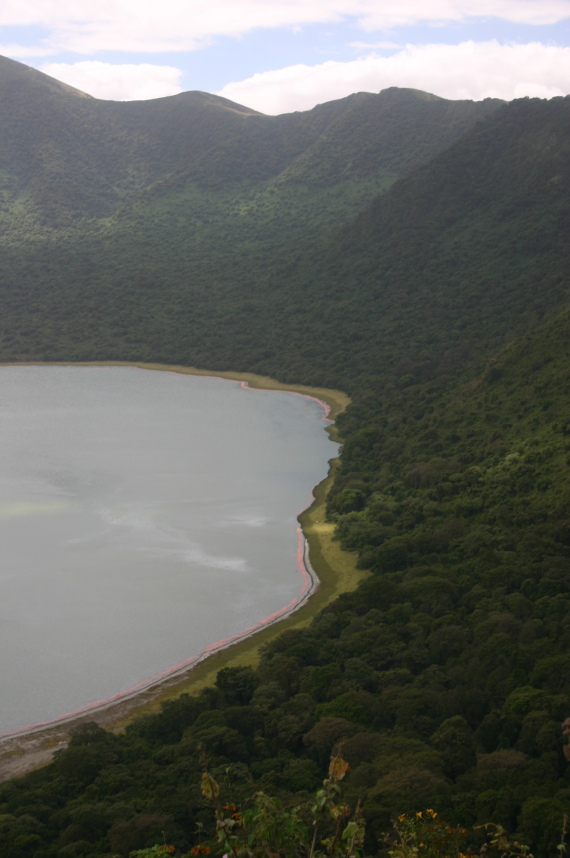