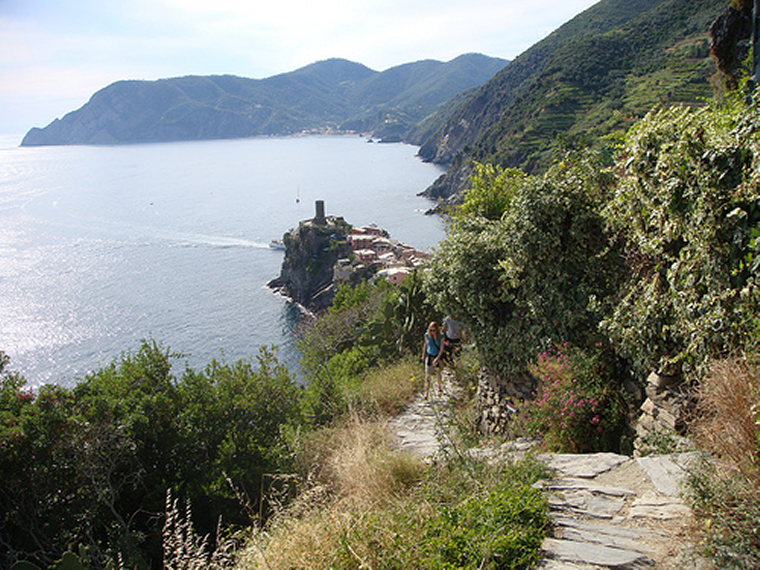 The Cinque Terre (five lands) of Italy's Ligurian coast is a group of tiny Medieval towns which defiantly grasp the inhospitably rugged coastline as protection from Turkish pirates, who regarded the area as easy pickings. Strung along the edge of the sea, at the feet of mountains covered in ancient terraced vineyards the area has been admired for its white wine since Roman times and the hand-built terraces would be as long, laid end-to-end, as the Great Wall of China - there are, as the name suggests, five of them in total: (from north-east to south-west) Monterosso al Mare, Vernazza, Corniglia, Manarola and Riomaggiore; sandwiched between Levanto to the north and Portonovere to the south.

The thrall of this arresting terrain lies in the isolation in which it passed the last thousand years: a road wasn't built until the 1960s and, largely poverty-stricken until National Park and UNESCO status transformed the economy into a tourist one, much of the towns' architecture and atmosphere has remained pretty much unchanged since they were built. The disadvantage is that the Cinque Terre's exquisite beauty is not a very well-kept secret: the lower (azzuro) trail has never been a spot for those dedicated to solitude, and the upper (rosso) trail is soon to become greatly more populous, courtesy of a cable car from Riomaggiore.

Each town has its own distinct personality. Monterosso is the most developed resort town, split into old and new, with functionall hotels, beach umbrellas and car parking concealing, beyond a tunnel, a huddle of medieval crookedness: tiny alleyways, a 16th-century Capucchin monastery with some fine paintings, an ancient castle and harbour. Vernazza rises straight out of the water and is dominated by its castle, with defensive views of the other towns. It is family-friendly and life centres around the large natural harbour and beach. The locals are much admired locally for having put up a barricade to stop an encroaching road; the town remains car-free to this day. Corniglia, a slightly gut-wrenching 400-rock-step climb up from the coast, has been the area's most celebrated vineyard since Roman times. Manorala is a tiny, straggly and peaceful fishing village, straddling a ravine. Riomaggiore, on first sight, is dull. However, stroll through the railside tunnel (or take the lift), under blousy washing lines and up through higgledy-piggedly alleyways, and it transforms into a fairytale of ancient pastel houses haphazardly piled up above the horseshoe-shaped dock.

As a roadless economy, communication between the villages was by foot until very recently, resulting in a magical network of footpaths between the villages that provide walking opportunities for pretty well everyone from toddlers to troopers. Walks vary from a paved 20-minute ramble (Manarola to Riomaggiore) known as the Via dell'Amore, to a full-on 40km hike on high, strenuous paths.

Hiking the Cinque Terre is an excellent opportunity to explore Ligurian marine life and five idiosyncratic models of age-old regional agriculture and industry, passing through abundant fragrant shrubbery, pine groves and flowering cacti and enjoying frequent and magnificent views of the sea, coast and its settlements.

Riviera di Levante tourist offices supply maps of the sentieri (paths), most of which are very well-marked and serviced. It might just be an idea to ask about the current status of the trail you choose, as they are regularly closed for improvements. The treks can be as relaxed or demanding as you wish, as the towns provide welcome watering-holes between steep climbs and gruelling steps. For those who wish to ramble over several days or take daily sojourns to Levanto, Portovenere or Lerici or the restored oil mill in Groppo (above Manarola) the towns provide an ample variety of accommodation. 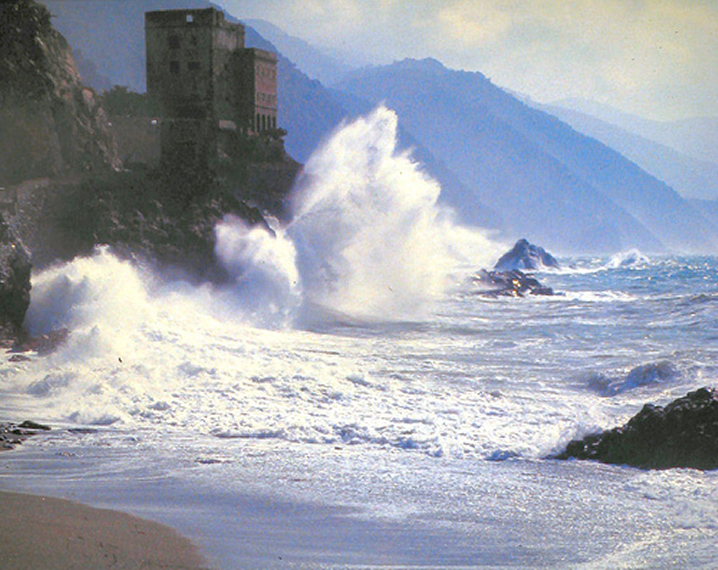 Name: arose23
Posted on: 22/05/2013
Hello! I just got back from Cinque Terre and LOVED it. However, the trail is closed after the second village! After all of my extensive online research before I left, nothing told me this- I must have been reading outdated information at times. The trail has been closed for at least 3 years due to devastating landslides and flooding. Word on the trail it will open this June, but locals said it was impossible. Cinque Terre is a national park. I would suggest going to their website to contact them before planning a trip there! The sea was even too rough to go on the boats. Also, Cinque Terre was full of American tourists and I hear it is unbearably crowded in June and July. I was lucky to have good weather for mid May but wish I could've had a bit more privacy. The nickname of the trail is the "lover's walk," so don't go alone after a break-up! The food isn't great, either. I wish I could have gone here 20 years ago. Good luck and happy trails! Walkopedia says: THANK YOU!

Name: jdarracq
Posted on: 17/07/2013
I've been to Cinque Terre in May 2013, and indeed the path section between Manarola and Riomaggiore (via de'll amore) was not practicable (closed gate at Manarola train station). The path section between Vernazza and Corniglia was also officially closed, but without gates, so in practice, path was used by walkers as if it was open...and for free!

Walkopedia says: THANK YOU, O GENEROUS ONE WITH YOUR TIME! appreciated.

Name: Jude
Posted on: 02/12/2013
Have just completed the Cinque Terre trail and found it stunning, exciting and, in some sections, hard going. Each small village has it's own unique setting either by the sea or high up on a mountain top. The towns are somewhat commercial although the small shops are quaint and sell locate produce and hand-made goods only. We were hoping to walk the whole of the trek, however, the farthest walk, which is right by the sea and therefore quite beautiful, was closed off following a landslide. We were told that this section of the walk would be reopened in 2014, but I would suggest that if you don't want to be disappointed, you check before going. Having said that, all the other sections of the walk were open and were magnificent. Even though we live in Australia it is our plan to return one day and complete the walk. By the way, we chose to stay in Levanto at Villa Clelia and loved it.

Walkopedia says: THANK YOU for this. Very helpful.

Name: SGuastaferri
Posted on: 15/09/2016
In regards to the Cinque Terre the path leading from Riomaggiore into Manarola is closed. As well as the one leading from Manarola to Corniglia is closed as well.

Walko says: Thank you, SGuastaferri, very helpful and much appreciated! 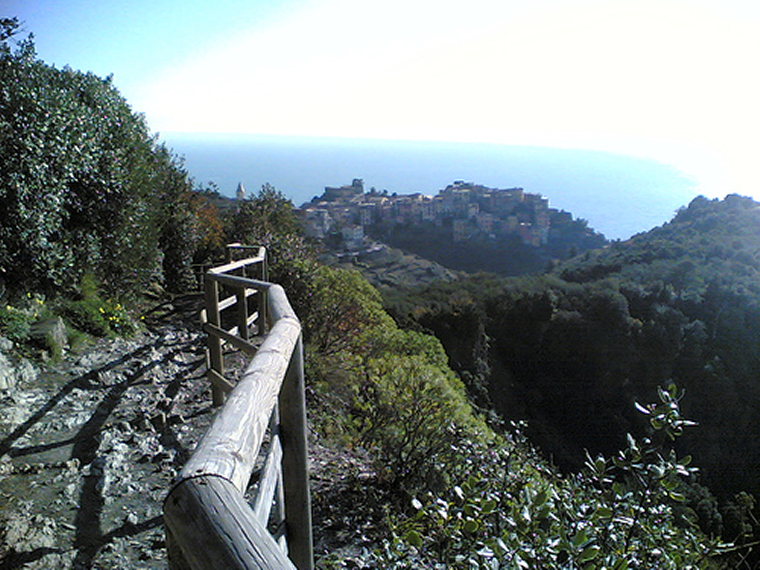 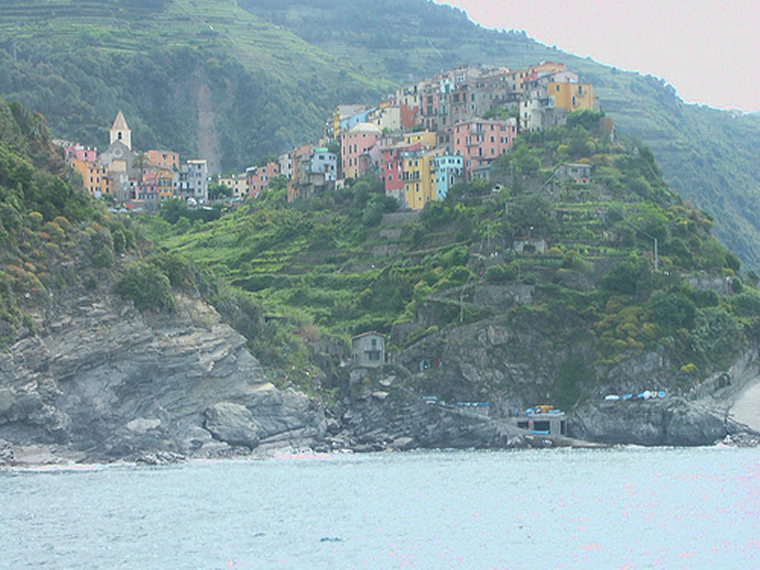