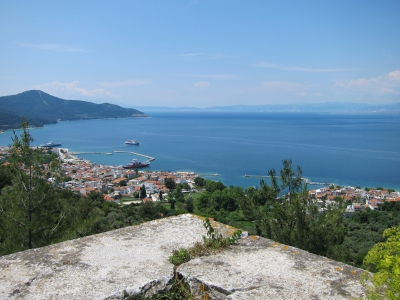 This is an exceedingly delightful exploration of the ancient walls of Limenas, formerly Thasos, capital of the eponymous island city-state just off Greece's northern seaboard. The city had a long and prosperous history, and remains from nearly 1,000BC until Genoese times are on show.

Start with a delve round the fantastic museum just above the ancient naval harbor, its entrance dominated by a 5m tall unfinished C6 kouros, one of the most thrilling we have seen of a thrilling, sometimes almost abstract, species. Then it is off, past a sanctuary of Poseidon and a quarter of remarkably sophisticated C8-C5 homes, along a delightfully pine-shaded track just above the ancient commercial harbor (you can see its just-submerged mole circling out into the turquoise waters), to the start of the walls as they climb the craggy, three-peaked ridge that protects the eastern quarter-circle of the city.

After a little chapel on the ruins of a classical sanctuary overlooking the island's east coast, the city walls, of dressed stone, a beautifully regular later (classical) layer above earlier  monumental "cyclopean" blocks, the remnant of earlier walls destroyed by the invading Darius, climb steeply through mixed forest to the theatre, which commands a panorama over the city and harbours, and across the strait to the mainland, that is so beautiful you wonder how any audience would ever have concentrated.

We are now in lovely stands of pine and holm oak. Our front runner has a large bright brown snake - a viper, we are later assured, although I am not so sure - streak across his foot.  We see another later on.

We reach a platform just below the Acropolis, with a mouth-watering view south down the coast: it is too good an opportunity to miss, so we start lunch early. Delightful. The Acropolis has been many things, including sanctuary to Apollo, its extant form a Genose castle which has classical fragments built into its rubbly walls.

Further along the ridge, we have a second lunch sitting on the high platform of the Temple of Athena, enjoying the huge view across the fine and varied trees to the ancient harbours and the modern town with its busy ferries.

A steep, dappled olive grove gets us to a little Sanctuary of Pan. Then it is down some secret steps hewn into the rock, faintly reminiscent of Petra, to spectacular gate, lintel still in place, in the olive groves above the town. Back on the plain, the Gate of Silenus sports a unique relief showing a (very) virile, slender figure, a different personage from the sagging debauchee of Titian.

The walls swings round through the suburbs to the sea, but I am ready for a break. My last stop, back by the harbor, is the agora, slumbering peacefully in the afternoon heat. 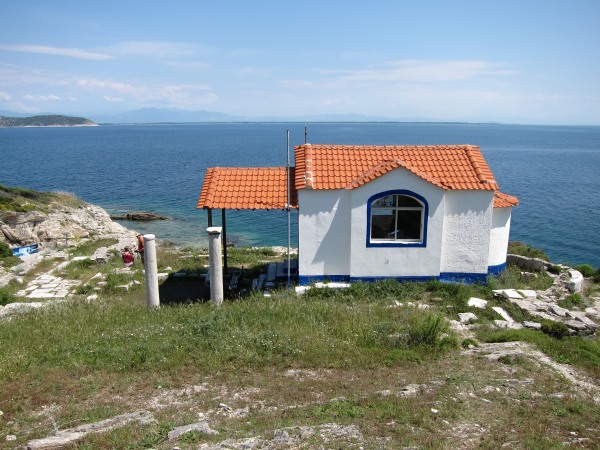 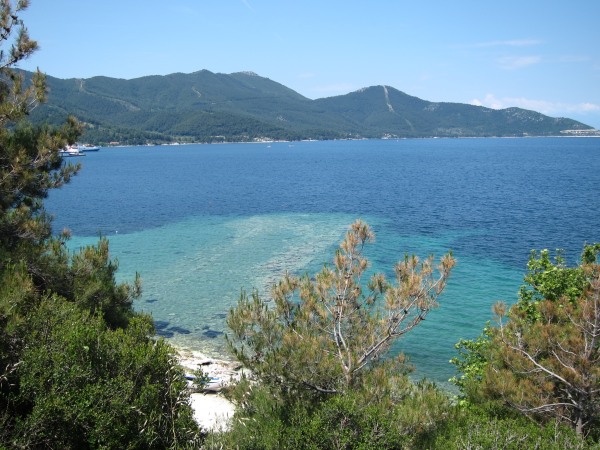 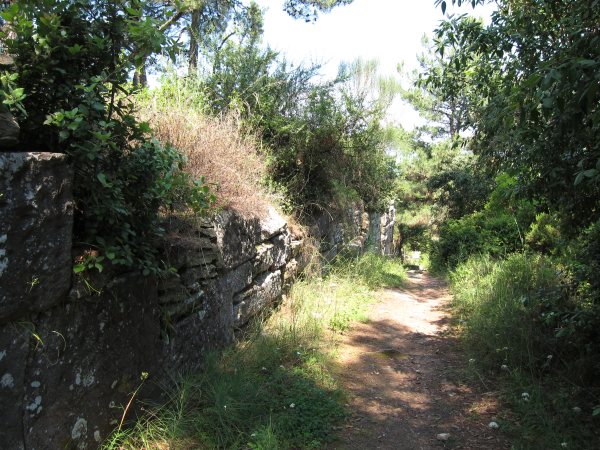