This can be tough walking in high, remote mountains, on which you will have to be self-sufficient and where altitude can cause problems. Come prepared. " /> 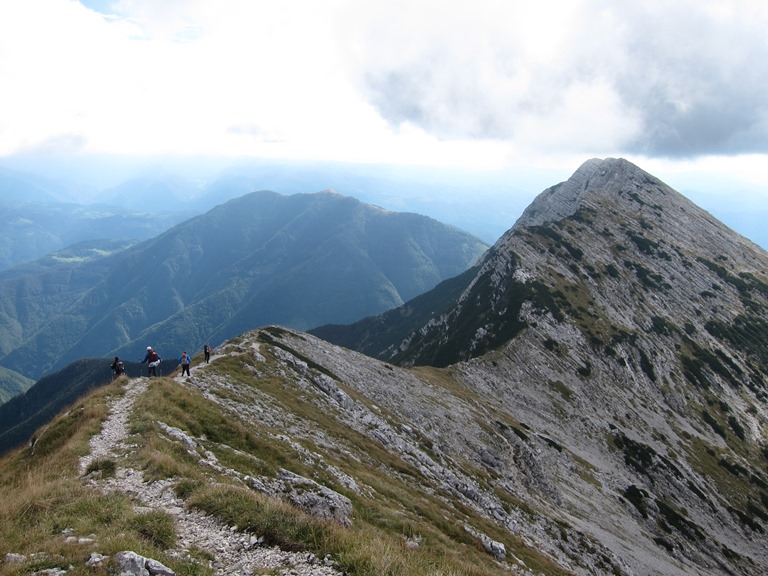 This relatively undiscovered limestone range (think Dolomites without the crowds) of around 150 peaks over 2000 metres high, fills north-west Solvenia (and extends into north-eastern Italy), offering superb Alpine walking, with outstanding natural beauty and spectacular views. The area's favourable climate and plentiful rainfall support a wide variety of flora and fauna.

This is glaciated limestone country, so think ridiculously sheer cliffs, spires and gorges, harsh bare rock and long scree slopes, high meadows and waterfalls and lakes mixing it with disappearing rivers. (The world karst is, indeed, Slovene derived.) It is effectively a continuation of Italy's Dolomites, although not as high as them or the main Alps: its highest and best known peak is Mount Triglav, at 2,864m not huge but nonetheless immensely striking (and with immense views) and a two-day effort to climb. And compulsory for all Slovenes to climb in their lifetime, which can make for a crowded summit ridge.

The Jalps' extensive and gorgeous forests are a glory, and the range shelters wildlife ranging from ibex to eagles, marmots to chamois to wild boar. High meadows alight with famously riotous wildflowers in Spring and early Summer provide vivid counterpoint. The Triglav National Park, which protects this pristine mountainscape, also helps conserve its remarkably unchanged rural heritage, nestling perfect mountain villages and remote farmsteads and offering an insight into traditional ways of life.

Slovenia has always been a backwater, often invaded and usually part of someone's empire, from the Romans to the Hapsburgs. The River Soca was a bloody but relatively little-known Austrian/Italian battle front of the First World War, and while walking it is still possible to find evocative evidence of the trenches and fortifications in which thousands of men lost their lives. While it became part of Yugoslavia after WW2, Slovenia avoided the genocidal post-communist Balkan conflagration of the late C20, and indeed has always looked more west than east.

There are high refuges aplenty to stay in, so you can keep up in the highlands for some while, and delightful towns and villages down in the valleys to base yourself in. You will eat well and can eat cheaply and don't normally need to carry a sleeping bag.

There is a huge range of walks to suit all tastes and energy levels, from demanding multi-dayers to delightful one-day expeditions to gentle and lovely lakeside potters. Here are just a few.

{C}{C}{C}{C}-             The great long-distance trail is the Slovene High Level Route, which passes through the Julian Alps on its 550km Odyssey through the varied and spectacular mountains that form Slovenia's borders with Austria and Italy. A traverse of the Jalps on that trail would be an outstanding experience. Stage 6 crosses the heart of the northern Jalps in 5 days, from Dorje to the Vrsic Pass, taking in an ascent of great Triglav while it is at it. This does involve quite a lot of exposure but with good via ferrata support.  Get Cicerone's Trekking in Slovenia  for the high level route across the Julian Alps, which you can easily choose a chunk from.

{C}{C}{C}{C}-               {C}{C}{C}Triglav. This ultimate Slovenian peak, a fierce limestone mass standing clear of everything around, can be approached many ways, from the north as well as the southerly Bohinj area. See our Triglav page for details.

{C}{C}{C}{C}-               {C}{C}{C}With a plethora of high huts, you can easily devise your own circuits or traverses. Have a look at the following ideas derived from the Cicerone: a 3-4 day circuit around Lake Bohinj (see more below); winding from Kranjska Gora to Trenta (3 days); a 4-day traverse from Bovec via the spectacular Krn range of mountains to Bohinj.

{C}{C}{C}{C}-            The walk described in a chapter of Trekking Atlas of the World, a snaking route along the Lower Bohinj Ridge, then up the Triglav Lakes Valley to Triglav and on to Mojstrana in 5 days, and then back over the northern massif (many options, here to) Rateče, in 10 days total, looks more than a treat - a privilege! Walkopedia walked the first half of this in September 2015, from the top of the Vogel cable car, along the Lower Bohinj Ridge up to the Prehodavcih hut above the Triglav Lakes Valley, planning to cross the Hribarice high land below Triglav to the Planika hut, climb Triglav and head back down. 5 magical and very varied days, which we call the Grand Bohinj Horseshoe. (We had to abandon our final days because of terrible weather and early snow - we'll be back!). See William Mackesy's account of walking the Grand Bohinj Horseshoe, including the Lower Bohinj Ridge.

There are several excellent bases for walking, from all of which you can spend days on the local trails.

Bled, on a lovely lake at the far east of the range and easily accessible from Ljubljana and the airport, has lovely lower walks, both by the lake an on the lower slopes; the dramatic Vintgar Gorge (4 hrs or so); and hikes to superb views (Galatovec) and probably the finest walk in the area, through lovely scenery to the peaks of the high and sheer Lipanca Ridge.

This ski town to the north of the main range has walks northward into the Karavanke range, toward the Austrian border as well as to the south in the high Jalps. A whelter of great walks, including:

{C}{C}{C}{C}-     And two 2 day hikes to bag the summit to Triglav: both stunning but challenging routes, long and demanding and involving exposed sections: both would require a strong head for heights and stable weather - and overnights in refuges/huts.

Beautiful Lake Bohinj, Slovenia's largest, sits in a superb glacially gouged trough, beneath huge cliffs to its north and west end, and is an excellent walking base, with fine walks in every direction. All tastes are catered for, from a tour of the lake and other lower-level saunters (including around the lake and to Slap Savica waterfall), to low peaks to high ridge traverses and summit assaults, including the easiest ascent of great Triglav.

{C}{C}{C}{C}-    The Lower Bohinj Ridge to the south offers a variety of walks, including 1,922m Vogel from the cable car top (5 hrs); to a fantastic 8-hr ridge trek, at heights getting on the 2,000m so don't try it too early in the year or you will meet standing snow. This southern fringe of the Jalps has gorgeous views in every direction, with the heart of the range lying to its north. It is also famous for particularly fine wildflowers, and that is saying something. Really not to be missed.

{C}{C}{C}{C}-       {C}{C}{C}The Triglav Lakes Valley to the north is also unmissable, a long valley accessed to the right of the great Komarča cliffs; forested in its lower end, it nestles 7 lovely and different lakes below magnificent high, broken ridges. Really superb views and visual thrills throughout. You can do a day walk here, but 2 days, would allow a full exploration, including an ascent of Veliko Spicje (2398m) and its high ridge, which commands truly amazing views over a huge expanse of the Julian Alps.

Bovec area: this village lies to the south-west of the main range, near the Italian border. To the east (and then south-east) runs the Soča valley, scene of intense WW1 fighting. This is a lovely area, tremendous cliffs rearing above the classic valley bottoms, with fine walking in most directions.

{C}{C}{C}{C}-  To the north-west are the cable car-approached Visoki Kanin and Prestreljenik, and the long and fabulous traverse to Rombon; and huge Mangart on the Italian border to the north.

Finally, to the south-west is the Kobarid area, which boasts a particularly immediate WW1 walk through various battle sites and other excellent valley and ridge walks.

PLEASE help us BY RECOMMENDING YOUR BEST WALKS giving us your comments AND SENDING PHOTOS! Thank you! 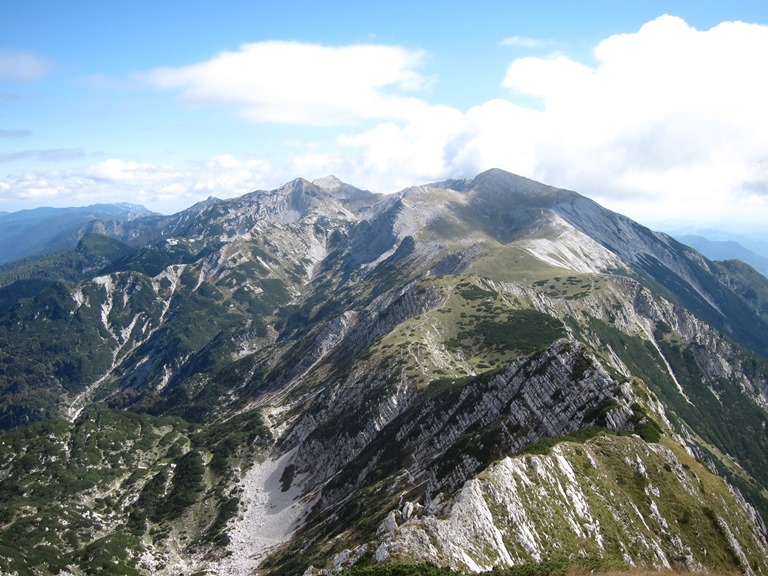 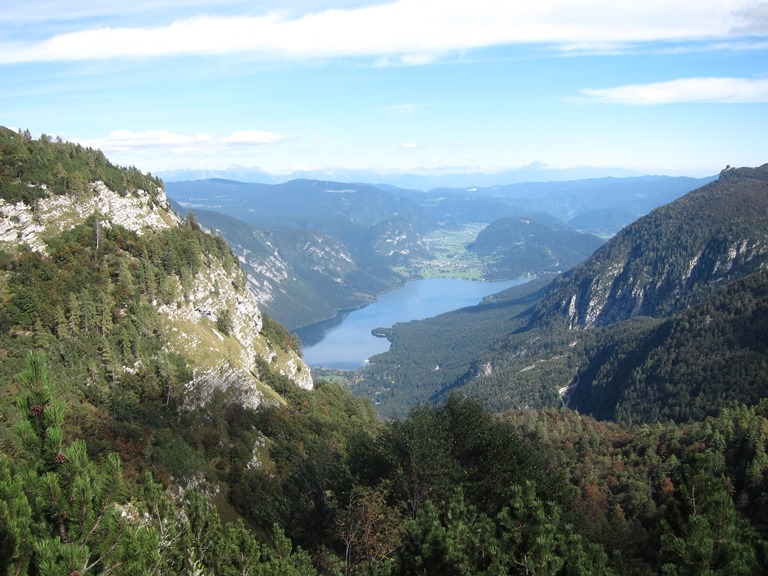 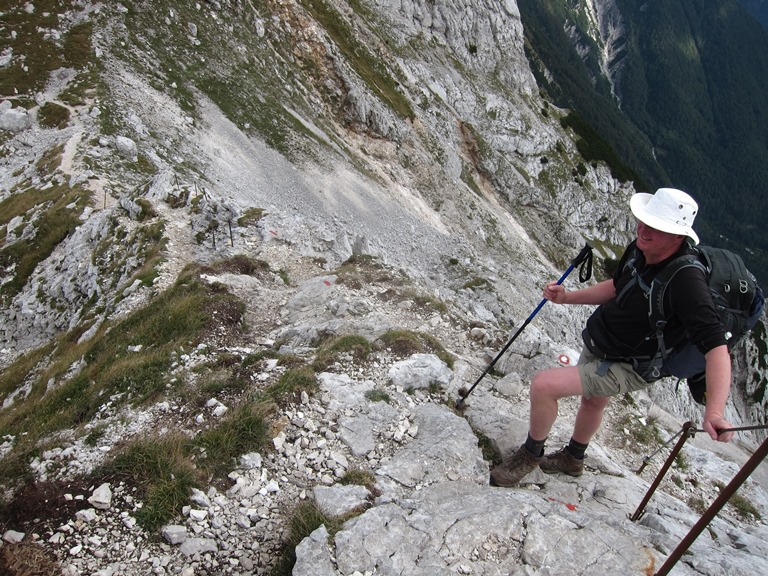 Other great walks in Slovenia