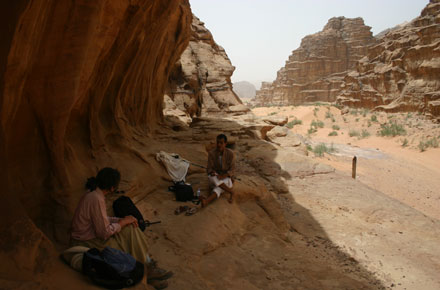 We are standing beside the Seven Pillars of Wisdom, making our final adjustments before starting up a very rough looking canyon. From a distance, you can project a degree of columnar order onto the cliff face of Jebel Makhras, one of the first features of the great Wadi Rum you meet when approaching from the north. From where I stand, though, it looks like, well, a heavily eroded cliff. Sometimes knowledge can spoil things, and you really don't need to know that the title of T. E. Lawrence's famous book bears no relation to this place. Or that these cliffs were in fact named subsequently in honour of the book even as a tourism gimmick.

We are off, up the sandy bed of what is no doubt a deadly torrent in flood, which winds between steep slopes of broken sandstone, sheer cliffs rising high above. It is grimly beautiful. It is 8.30 am and already hot. We had tried to start earlier.

Wadi Siq Makhras divides the Seven Pillars formation from the rest of the vast Jebel Um Ishrin, a sheer-sided, titanic mass which rises to 1,750 m and forms the eastern side of the enormous canyon that is Wadi Rum. Wadi Rum is some 900m above sea level and the cliffs rise sheer for up to 700m (2,300 ft). This place is so huge and grand, it is hard to get a real feel for its scale without statistics.

This is delightful walking. The valley narrows and its sides become steeper. There are many snake trails in the sand, including the notorious deadly sidewinder, the Um-qron or Horned Viper. We keep carefully behind Awad, our Bedouin guide. Awad is slender, perhaps 5'8'', and knows every patch of shade and every step of this track.

The canyon is now so narrow it can fairly be called a siq, with walls of winding scoured sandstone interspersed with rough, protruding layers, like some palace of wrong-period baroque.

We crest the canyon end one of the oddest and suddenest watersheds I remember and are gazing over a wide, sandy waste to the magnificent Um Nfoos and Barrah massifs. The 'usual'' path circles the Makhras cliffs to the left, to return to Wadi Rum directly under the Seven Pillars, but we continue southward beside Um Ishrin.

It is now really hot approaching 40. It is the 18th of May, and we are at least a month late.

We plod up a wide entry, passing some Nabataean steps leading up to water pools, then swing left into the unexpected, extraordinary Siq Um Ishrin, a dead straight canyon no wider than 500m and lined by sheer walls getting on for 2,000 ft high. It is hard to do justice to its majesty and drama.

The timing is good, there is still merciful, almost liquid shade under the eastern wall, which, with a refreshing breeze, makes for delightful, elevating walking along the 3km canyon.

Shallow-carved onto a sandstone slab on a quiet wall are some rough but sensitive antelopes with supendous, slender horns and what look like camels. They are pre-Roman, and they show up pale against the dark crust of the canyon side. How long the rock takes to weather.

Up toward the top of the canyon are big sand dunes and a deep cleft, through which is a kilometre or two of pale hazy desert, then the huge walls of the Burrah massif.

We crest the dune and drop out from the canyon head into a big basin. It has taken some 3 hrs to here. We stride stoically out across alternating patches of hard and soft sand, although we are tiring in the intense heat, and this section can definately drag at the wrong time of year. On the far side of the basin, round behind another edifice, is a wind-scoured overhang in deep shade, where a perfect salad and humus lunch awaits us. (It is entirely reasonable to take a lift for this last trudge as we eventually did.)

You can continue further beside the Um Ishrin mountains, turning in through the fantastic Rakabat Canyon for a scramble right through its centre, back to Wadi Rum itself, conveniently near Rum village. This is said to be a superb walk, a scramble in places, but the route is not easy and requires a guide unless you are hyper-experienced. Next time. 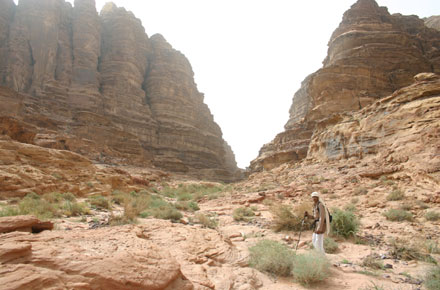 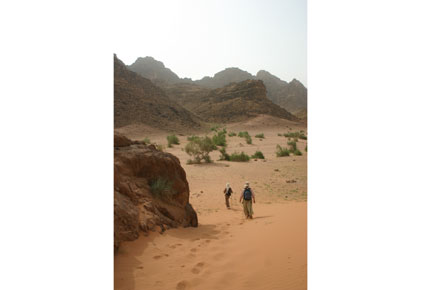 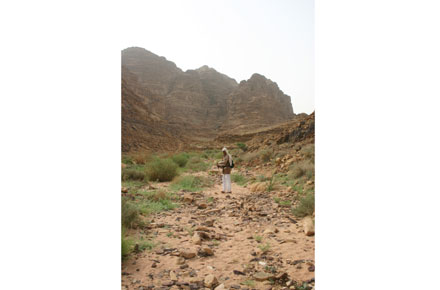