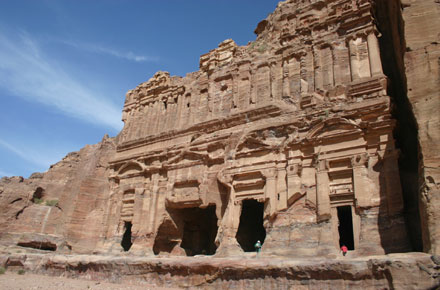 This thriller of a walk can be done in either direction, as an alternative to entering or leaving Petra by the famous but crowded Siq. When we were there in May 2010, people were being discouraged from entering this walk at the Wadi Mousa end (ie. outside the Petra site), so we walked out along this extraordinary slot canyon.

If you use this as an exit route, you are likely to be starting in mid-afternoon, when it can be very hot at the wrong time of year. Take proper account of how tired you will get when planning your day. Pick your time of year carefully: in May it was bone dry, but can have waist-deep pools at other times. Never go there if rain has fallen or is possible.

The initial short slog up to the Royal Tombs, in the cliff face of the huge Jebel umm al' Amr, is tedious in the heat, but wonder will prevail at the top, as you progress like a president along a parade drawn up in your honour. Magnificent facade follows magnificent facade. The Urn Tomb, behind a Byzantine ramp, is the first famous one, with its huge urn presiding over its facade and doric portico to the side. It was used as a cathedral in Bryzantine times. Next along are the Silk Tomb and the Corinthian Tomb. Soon you reach the huge Palace Tomb, its facade said to be the largest in Petra, with four doors and three tiers of columns.

You are now beginning to round the cliffs, leaving the central Petra basin. The next significant tomb is that of Sextius Florentinus, a Roman governor: a delicate, refined but gently melancholy structure.

The trail then drops to the bottom of the Wadi Mataha, crossing and re-crossing the river bed as it winds up this increasingly spectacular canyon, below the grandeur of the kilometer or two long western side of Jebel Umm al' Amr.

Shortly after a slight corner, where you can see the modern Bedouin village of B'dul on a high ridge to your left, the stream divides and you need to take the right hand fork, which is easy to miss as it looks too small to go far, and made us worry that we had taken the wrong turning. You are very quickly in an impossible, thrilling narrow and high-walled siq, in welcome shade most of the day, which winds its way through a number of jiggles that seem like dead ends until the last moment, past a few Nabataean niches and carvings. Slot canyons are wondrous worldwide, and Petra boasts an unfair number, but this is both outlandish and ravishing, with its scoured, undulating walls, striations of vivid ochres and siennas and high, narrow zig-zag of ethereal sky. This lasts for perhaps a third of a kilometre, passing an obviously dead-end ravine coming down from the right, after which you take the equally narrow siq that comes in next from the right.

You are now in the Wadi al Mudhlim, which runs a  fairly straight course for 1 1/2 km or so through the heart of the massif behind Petra (how did this happen?) to its junction at the top of the great Petra Siq. 20ft or more above the canyon entrance, a palm tree has been jammed into the walls by some torrent too terrifying to contemplate. The siq is only a metre wide at several points.

Further along, the siq is blocked by two boulder heaps that you have to scramble up - with some difficulty if you aren't tall and mild trepidation whatever height you are, as your eyes would water if the rocks came loose while you were hanging from them. These are not mentioned in (and presumably post-date) the Cicerone guide.

Somewhere above the trail is the remains of a Nabataean dam, which we were too tired or intent to notice.

The Siq eventually widens out into a more conventional (but still thrilling) canyon with the regulation oleanders (schmanders - how quickly you can get blasé) littering its bed, in full gorgeous bloom when we were there.

Then, rather suddenly, you are approaching that masterpiece of Nabataean ingenuity, a 90m long tunnel built (with an accompanying dam) to divert potentially disastrous flash floodwaters from the main Petra Siq into the Wadi al Mudhlim.

This is one hell of an exciting walk. You emerge blinking into the now unwonted light, heat and populace at the entrance to the famous Petra Siq, who may stare at you a bit as you stagger, Indiana Jones like, from this void in the earth. 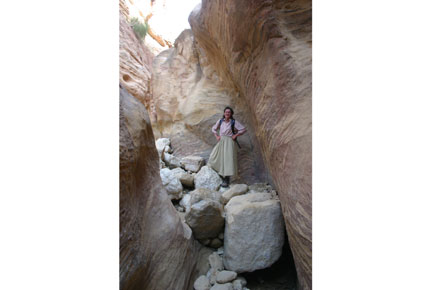 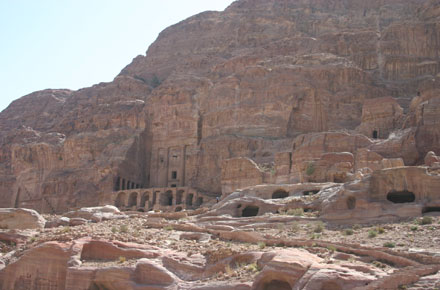 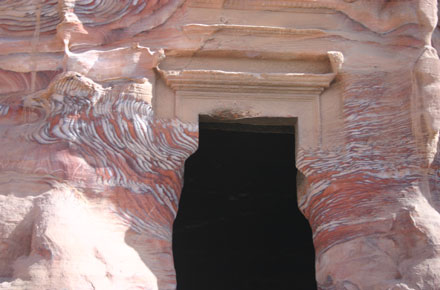