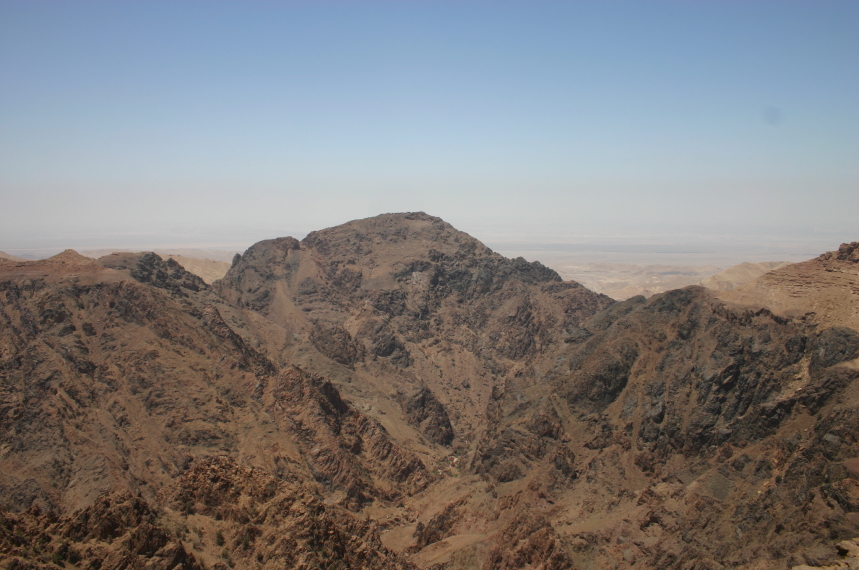 We leave the deep shade of the cafe at the lower end of Petra city, and somewhat reluctantly address ourselves to the task ahead. We have already been walking for 2 hours, and it is a mid-May midday, and roasting hot.

We head off up a sandy canyon bed, past Nabataean tombs in varying states of disrepair, one of them harbouring an incongruous car.

And then the steps begin, up a steep and crazed lesser canyon. This kilometer-long (it feels like more) processional route of over 800 steps was carved by the Nabataeans and passes tombs, including the lovely, simple faade of the Lion Tomb up a gulley to the left. It underpasses a leaning rock and clambers onto a ridge, gradually getting nearer the domes of the mountain top and leaving the last vestiges of the Petra basin behind: the grand views shrink until they are just visible in a chink between the cliffs.

We are not alone. A motley array of tourists in varying degrees of unsuitable clothing and footwear are slogging painfully upward. The many stalls and postcard-selling children do not enhance the atmosphere of the place.

We pant and swill water in shady patches, then press on, taking pathetic pride in looking better in these adverse conditions than a group of Americans teetering on ancient little donkeys.

Up a final rock ramp beside a deep cleft, and through a narrow gap in the final ridge, and we are in the weird, enclosed platform which provides a suitable setting for the grandeur of the Monastery. We gasp. This 3rd century BC tomb resembles the famous Treasury with its two storeys topped by a doubly broken pediment and a vast urn, but is a lot higher and wider. Like the rest of Petra, it hewn from the living rock. Health and Safety have sadly closed the path to its left that used to lead to its shallow-dish dome, and there is a Bedu teashop here, but this place is nonetheless mesmerizing and majestic.

We sit in the teashop by the cave that once formed the proprietors' home, across the plateaulet from the vast faade, and thirstily imbibe this magnificent spectacle, mixed with refreshing bitter lemon. From the ridge behind, we gaze down to the barren, blazing expanse of Wadi Araba to the west, and the black gulf of Wadi Sijagh, with the landmark peak of Jebel Haroun, with its white 14th Century shrine over the putative tomb of Aaron, Moses' brother, to the south-west. Marvellous.

Instead of returning down the steps, we head north across a broken little plain and circle the sheer side of the seemingly nameless mountain. A steep slog gets us to a platform that is separated from the wide ledge that our path is to follow by a queasy little scramble (crawl in my case) where the path almost disappears, the thousand-foot cliff below not bearing consideration.

Now it is truly fantastic walking, an easy path meandering with the contours of our oversize ledge, all the while enjoying huge views across to the black rocks on the far side of Wadi Siyagh and beyond to Wadi Araba.

We gradually swing round above a new gorge, behind it the scrubby little plains and shattered rock of the highlands. At a junction under another huge cliff, we turn right, prospecting our way over a low ridge of smoothed stone domes (this seems trackless and requires care but if you keep central and head for the riverbed you will pick up the path) into the wild Wadi Muaysra al Charbiyya, now round behind the mountain from the Monastery.

This is a lovely ravine turning into a canyon, at places thick with flowering oleander bushes in its sandy bed, surrounded by orange sandstone walls and towers. It steadily deepens, becoming increasingly dramatic, then the tombs begin mainly simple doorways in the rock, but including more elaborate faades as the canyon widens and nears Petra proper. Fantastic and you will truly deserve your lunch, rather than think you do as normal, when you finally trudge out into the broiling Petra basin.

Walking to the Monastery and back will take up to 2 hours. The full circuit is around 4 hours. 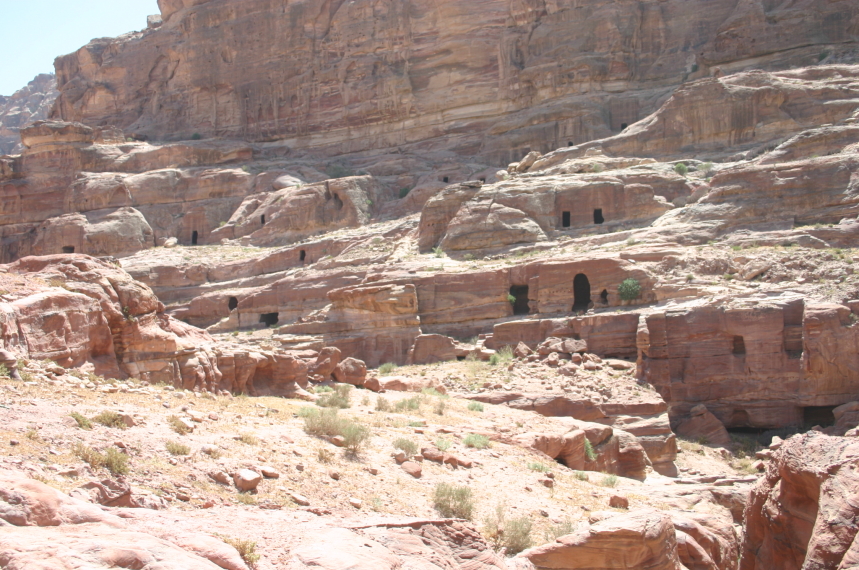 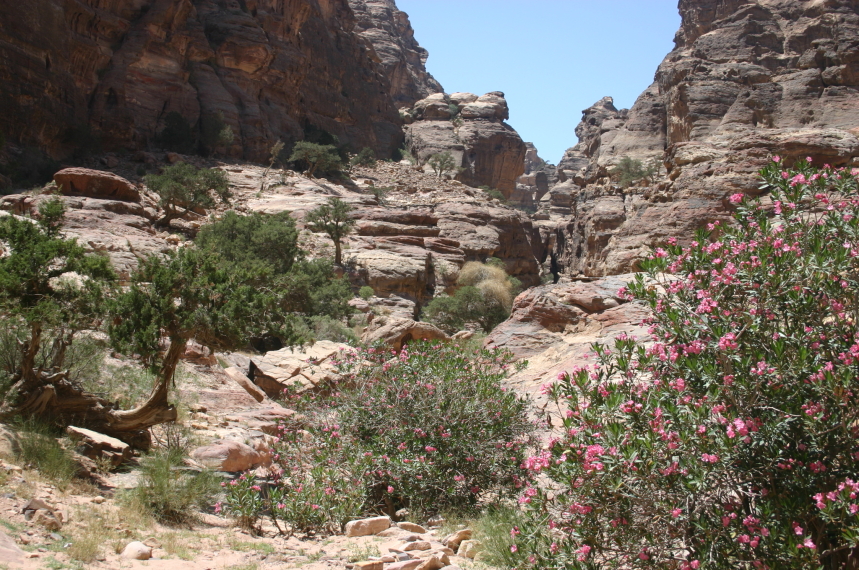 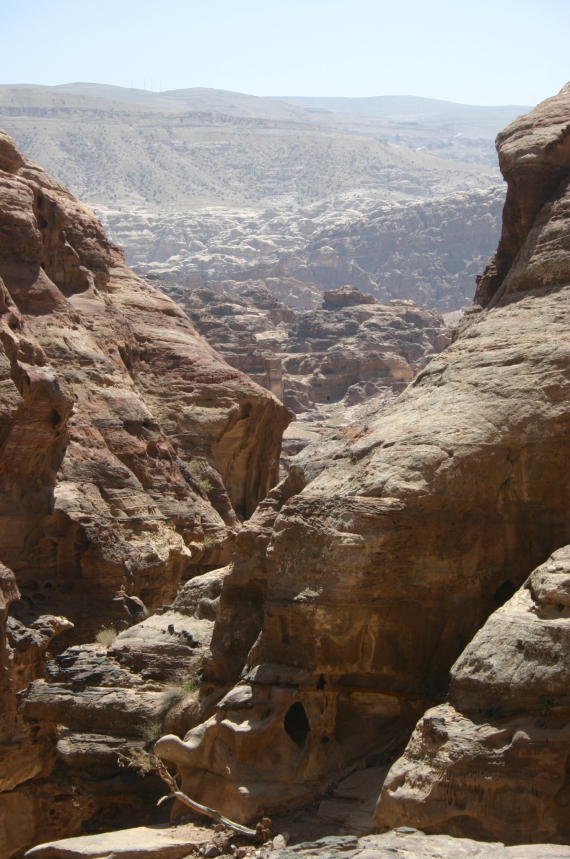