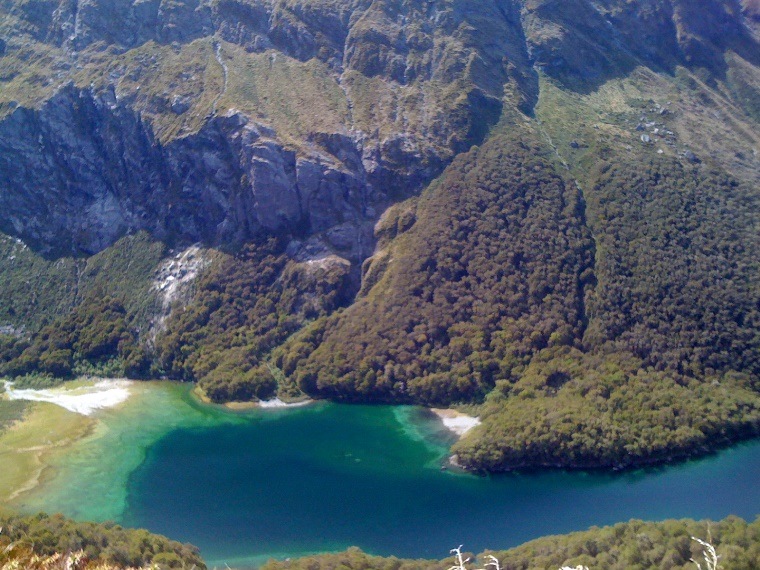 First, a few nods, in every which direction

New Zealand: as you will know, famous for walking. The crucible of enormous forces, formed by earthquake, volcano and glacier, and still changing today. The beauty of this country changes abruptly and often, from Pacific coast, say, to inland plains. Volcano, anyone?

The Great Eight: grouped for their popularity, but mostly for their transcendent landscapes and personality, these eight walks are a relentless dripfeed of scenery, view, scenery. And Routeburn is not the least of them.

Routeburns Fiordland: the epicentre of the South West New Zealand World Heritage area Te Wahipounamu. The region is stunning, and rugged, and the Routeburn trail passes right through it.

David Briese: Walkopedia would like to thank tramper David Briese, based in Oz, for access to his personal account of this magnificent trek, walked with a friend. See the full blow-by-blow description and more in his fantastic website www.gang-gang.net/nomad/NZ/NZ26 We love it!

(*Many of the mountain streams in this part of New Zealand are called burns, reflecting the Scottish heritage of the early settlers in the South Island)

Following the tradition of virtually all New Zealand walks, we were immediately under the canopy of a dense beech forest and winding our way westward and upward into the heart of the Humboldt Mountains. The track kept close to the northern edge of the Route Burn, crossing several side streams and cascades as it climbed steadily into a narrowing valley, the sound of the rushing waters rising and falling as we passed nearer or further from the stream banks.

Periodically, views of the stream appeared below through the trees, foaming white at times, and subtly different shades of blue to green at others, as the glacial meltwaters tumbled across shallow stony beds or flowed quietly in deep pools. The Route is an exquisite burn.

After a period of climbing the track flattened out onto a wider terrace, crossed the Route Burn via a swingbridge and started to follow the edge of a grassy flat, which widened as we progressed. With no steep fall, the burn meandered gently through these straw-coloured flats, enclosed by steep-walled mountains.

Then, a steep 300m climb following the left branch of the burn up to the high valley beyond the Routeburn Falls. The rewards came in the way of magnificent views as we crossed the clearings created by a rock fall from Phoenix Bluff and a large slip a few hundred metres further on; back down along the crescent shape of the Routeburn Flats with the silvery thread of the burn meandering through it and the steep sided razor-ridged mountains rising steeply up from it.

A couple of bridges over sidestreams cascading down to the flats below and we arrived at Routeburn Falls Hut. A little distance further up, the private hut for guided walkers.

We headed up the rocky ridge behind the hut past the upper falls of the cataract and commenced a slow climb along a broad grassy valley. Reaching the next terrace, we followed a sweeping arc which climbed steadily around the southern rim of the upper valley. Across this valley we could see our path wending its way higher above a second cataract, as the Route Burn flowed out of the unseen Lake Harris.

The track then flattened out as it sidled across a steep slope high above the dark glacial waters of Lake Harris, with 1900m Mt Xenicus behind. Finally, turning west again, the track took us over 1255m Harris Saddle and down through a tarn-dotted grassy landscape to Harris Shelter, revealing more and more of the long spine of the Darran Mountains and their glaciers.

Dont miss the steep rocky ascent of Conical Hill: gain a glorious panorama of the snow-capped Darran Range on the opposite side of the Hollyford Valley. The views extended both up and down the valley, where low cloud spilled in from the Tasman Sea. Behind us, more views extended back over Lake Harris, now far below, and the route that we had taken this morning.

We now headed down off the saddle and its collection of picturesque tarns, dropping quickly to commence a long, undulating traverse across the Hollyford face of the Ailsa Mountains; an alpine floral wonderland, with daisies, button plants, bluebells, flax, hebes, gentians and many other unrecognised alpine flowers dotting the steep slopes, criss-crossed by small streams pouring off the mountain in series of cascades and mini-waterfalls.

Soon after crossing the Potter Creek Falls the track climbed up again through a predominantly tussock grass and flax vegetation before crossing a ridgeline from where the tiny shape of Lake Mackenzie Hut, 300m below, could be seen. One last short climb followed and then a long descent, traversing the steep rocky slopes of Ocean Peak, all the time providing a superb view over the emerald green waters of glacial Lake Mackenzie. Eventually, the track dropped below the timberline and entered the cool dark shade of a beech forest.

Leaving the hut, we quickly crossed a hebarium (i.e. monoculture of low flowering hebe) and past the guided walkers hut. We re-entered the beech forest and climbed up steadily to reach the level of traverse, at intervals the silhouettes of the trees framing the various peaks of the Darran Mountains across the valley.

We crossed another series of cascades and small waterfalls, before eventually rounding a corner to see the majestic sight of the 80m high Earland Falls plunging out from a gap in the rockface above into a boulder-filled pool.

A slow descent now started, winding through the beech forest to emerge at Howden Hut, situated at the head of beautiful Lake Howden.

The one problem with the Routeburn is that, while it is a 33km walk, it is 270km and 6 hours by road back to its beginning near the upper reaches Lake Wakatipu from its end at the Divide near Milford Sound. At Howden Hut we had a choice; ahead lay the last few kilometres of the Routeburn Track and 6 hour bus trip, to the left lay the Greenstone Track and a 2 day tramp back to 12km from where we had left the car. 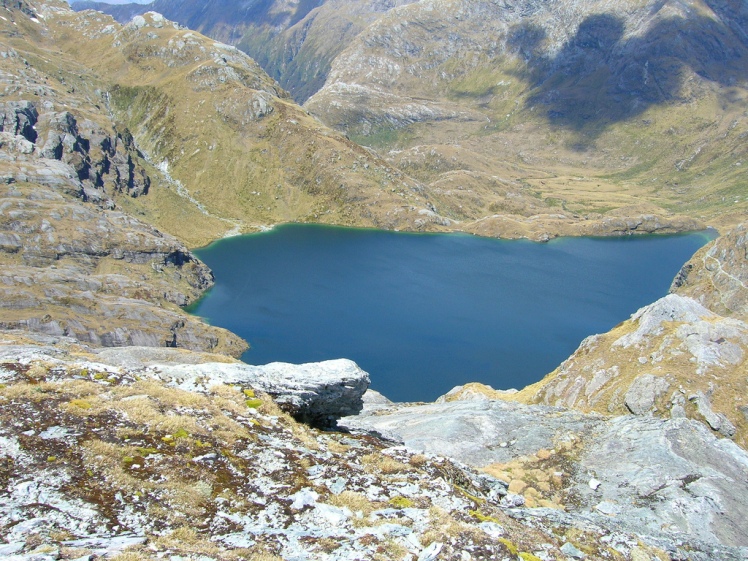 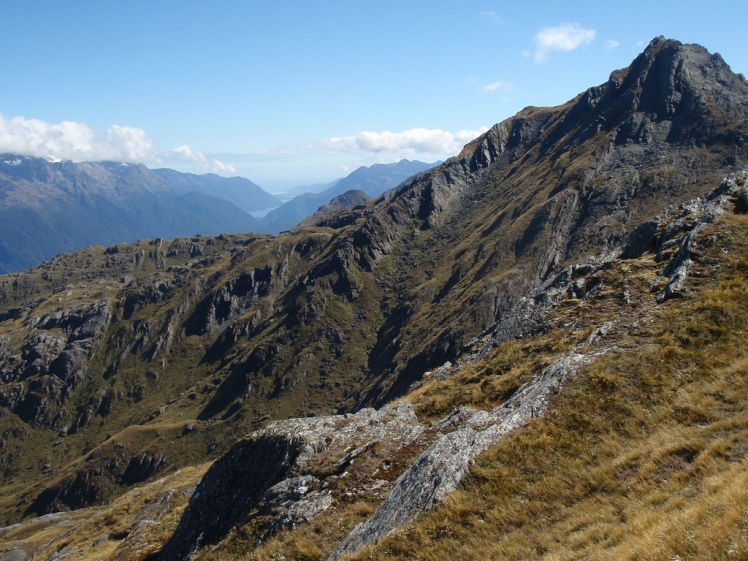 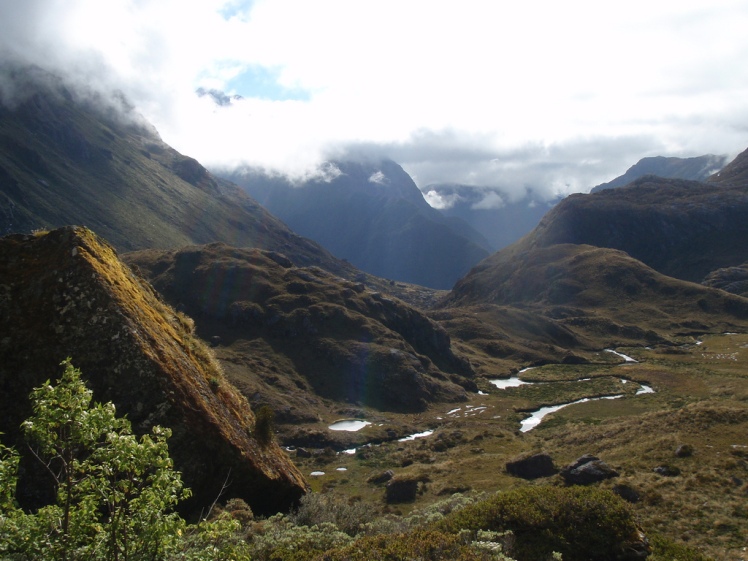 Other great walks in New Zealand