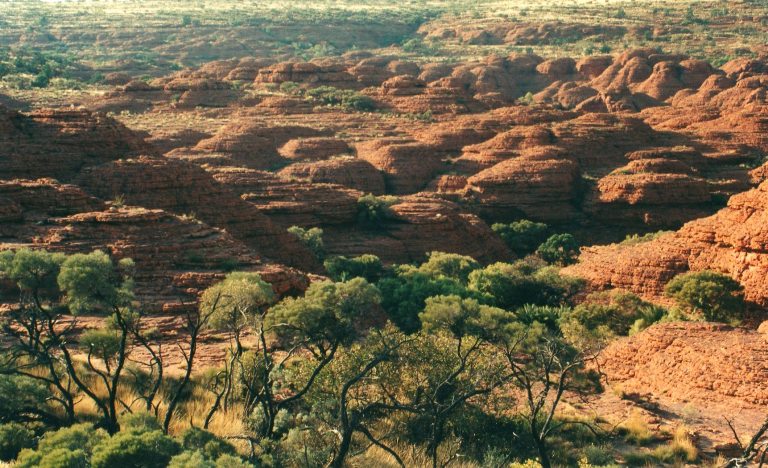 This beautiful, smooth-sided canyon pushes back into the heavily-eroded sandstone hills of the George Gill Range, which was laid down when a vast shallow sea covered much of what was to become Australia.  Ayers Rock (Uluru) dates from the same period. You will see sand ripples frozen into the stone from the time when it was the sea floor.

The hills rise in a series of uneven terraces to the top of the mesa, broken by clefts and huge cracks from which the odd tree struggles for its precarious existence; you will be there as much for its weird scenery and fascinating micro-zones as for the canyon itself.

The vegetation on the desert floor is dry, sparse spinifex grass, scrub and the odd struggling tree. It can be deceptive: following unusually heavy rain over the year before Walkopedia was there, the pale green grassland, dotted with desert oaks, looked like proto parkland. Despite this harsh environment, the local Aborigines had found plenty to sustain them as long as water was available.  The desert oaks are fascinating: stubby, tenacious, up to 1,000 years old, very slow growing.

Sheltered in corners here and there are living fossils: cycads, stubby palm-like trees whose ancestors, little different, had been one of Australia?s dominant species when it was lush rainforest. They had seen whole families of dinosaurs come and go.  They now survive, improbably, in sheltered gorges and lush corners in a few ranges in central Australia.

Across the top of the ridge is the southern rim of the main King's Canyon.  Its walls are sheer, smooth, almost polished sandstone, sometimes tender orangy-pink, evidence that it has been carved out or sheared off relatively recently, in other places burnt umber, showing it has survived for centuries.  Far below, rocky slopes, scrubby trees and little pockets of cycads.

At the head of this part of the canyon, a waterfall dribbles out of a deep cleft; beyond, a glimpse of a deep black pool under sheer crimson cliffs and trees: the Garden of Eden.

The plateau top has weathered into fantastic shapes, often compared to beehives or the ruins of a lost city.  Primeval cracks in the sandstone, in some places an almost perfect grid, have eroded into deep crevices and terraces, a seemingly regular pattern of domed tops, with "courtyards" and "streets" between them.

In the cool shade of the Garden of Eden, an extraordinary little lost world is hidden in the harsh sunburnt rocks of the plateau.  The King's Creek stands, deep and dark, in the bottom of the great cleft.  Trees, cycads, shrubs and grass fight for their place along the watercourse in a riot of fecundity. This permanent water was important to the local Aboriginal tribes, although it had never had the spiritual importance of Uluru (Ayers Rock).

A haul up some wooden stairs gets to the far cliff top.  The plateau top is at its most spectacular here, reminiscent of the ancient churches, squares and alleys of a sun-seared Spanish town.  Little patches of greenery cling on tenaciously in the hostile rockscape.

Several times, you emerged from the maze to dizzy clifftop views of the dozing canyon bottom way below.

The final descent follows a steep spur of broken rock.

Much of the year you will need to make this walk in the early morning, as it is sweltering by 9am.

Don't expect to be alone at high tourist times.

We stood at the edge of King’s Canyon early one summer’s morning.  The twisted outcrops of the edge of the George Gill Range, a heavily eroded sandstone plateau in the heart of Australia, were silhouetted against a pale blue sky.

The hills above us consisted of flat layers of sandstone, laid down when a vast shallow sea covered much of what was to become Australia.  Ayers Rock (Uluru) dates from the same period. 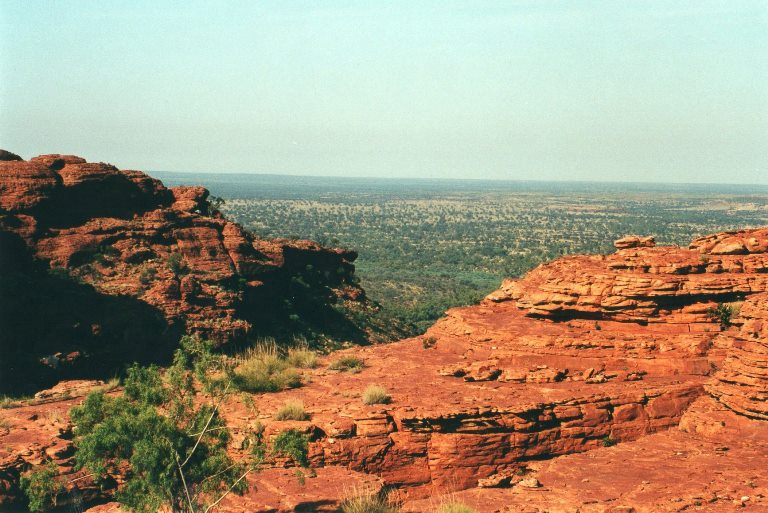 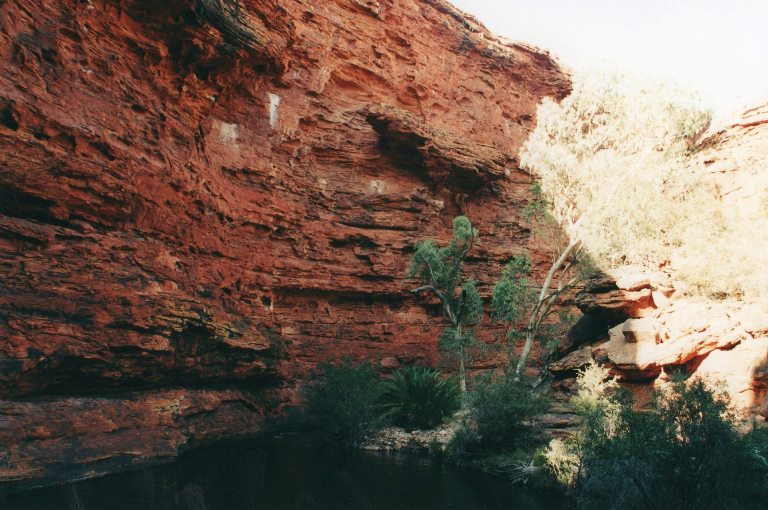 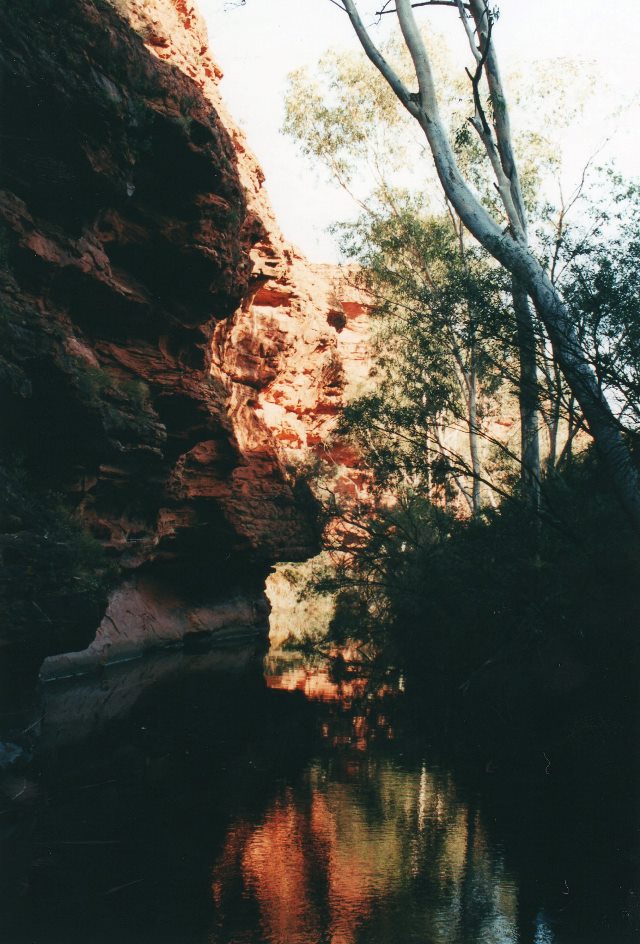