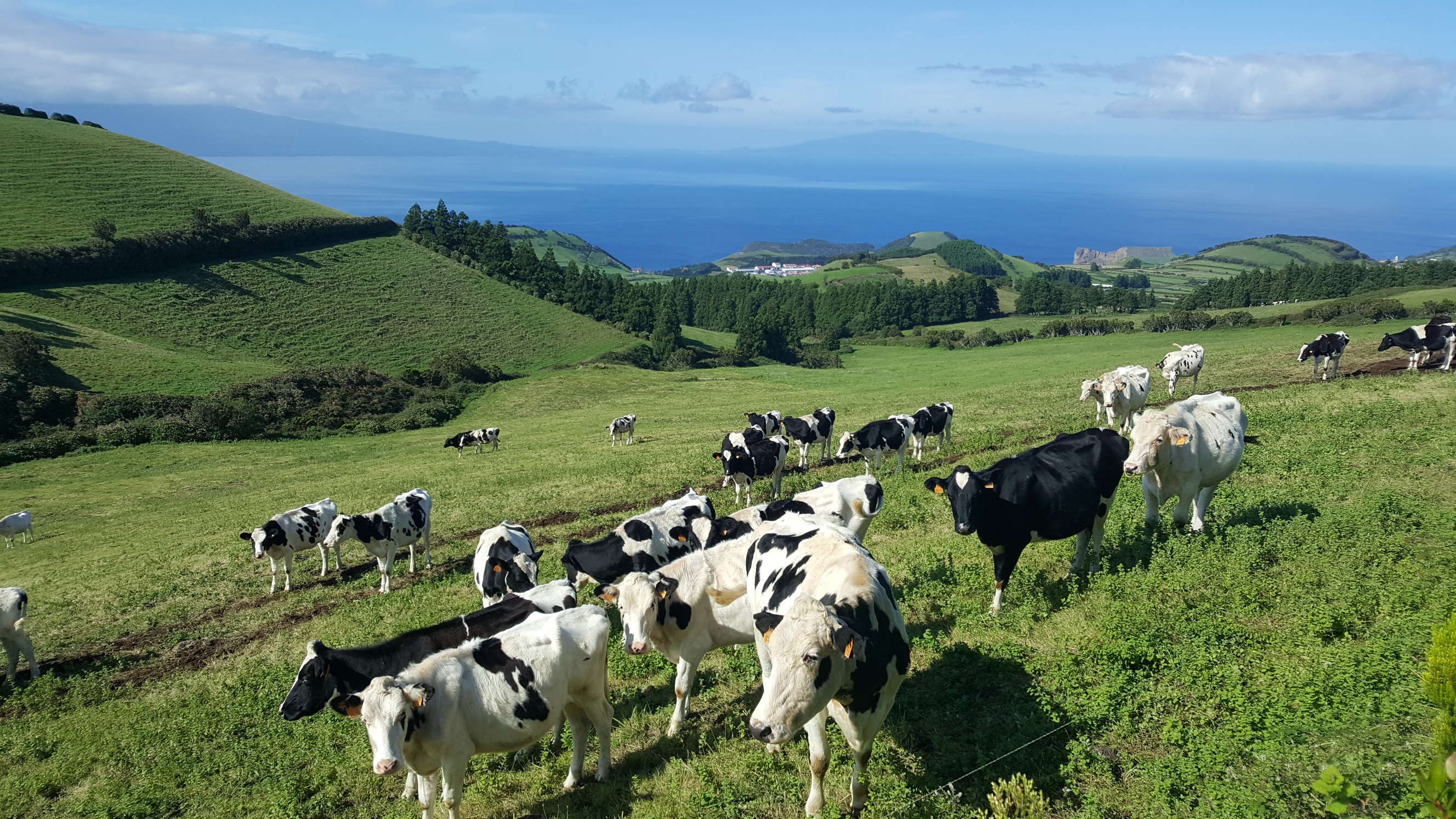 Sao Jorge's central ridge is, arguably, the finest walking in the Azores and a high Top 100 walk. Walkopedia fizzes with excitement just thinking of it.

Think of a series of volcanic cones, craters and other formations, some nestling little tarns to their heart, lining the central ridge of a long, slender island, with endless views on a fair day from its 1,000m tops across the strait to the thrilling volcano, Portugal's highest mountain, which dominates neighbouring Pico island, and on to the other Islands which decorate the infinitely receding Atlantic. They are covered in vivid grassy vegetation, with dark giant heather and woodlands along the mid slopes and a patchwork of little fields below that.

A good cinder track winds along this high ridge, which makes for miraculous walking, so easy underfoot that you can reserve all your attention for the visual marvels around you.

The central ridge is extraordinarily empty. While you will meet a few cars and walkers on a nice day in the area of Pico da Esperanca, the high point of the island, heading west Walkopedia met no one while up high except a couple of farmers in their vans and a hell of a lot of cattle.

A road crosses the ridge roughly halfway along at Pico das Caldeirinhas, enabling various walking options. If you come by car, you can park and walk there and back in either direction. But if you travel by taxi, you can do the following outstanding walks.

Eastward to Faja do Ouvidor

The star walk on S. Jorge and possibly in the whole of the Azores. A literally marvellous meander on a good cinder track around shapely peaks, craters, tarns, glamorously vegetated hillsides with the ever changing sea a constant presence all around, the drama of the Pico volcano a permanent fixture in the background. Walkopedia honestly can't find superlatives that do it justice without sounding ridiculous. Easily in the upper end of Walkopedia's Top 100 world walks.

It is compulsory to make the brief climb to Pico da Esperanca, the island's highest point at 1,053m, to admire the little tarns nestled so comfortably in its elegant double craters. Walkopedia had a quick kip in the sun on the softest-ever bed of grass.

A bit further on, you turn north and start the long but steady descent on tracks and lanes to Norte Grande, passing through a succession of vegetation zones, including particularly beautiful giant heather. Below this, you make a very steep descent on an old path down the cliffs to the lava platform at Faja do Ouvidor. There is a thrilling natural swimming pool to the left of the small harbour at the end of the walk.

Westward and down to Velas

The westward route is not as dramatic as the eastward one, without such high or shapely peaks, but it is full of visual delights: gorgeous views both north and southward towards Graciosa and Pico; elegantly curved hills with designer-positioned angled hedges for contrast and cattle for atmosphere; craters in the mid-levels and great crags above the so-blue sea; uplifting vegetation from bright blue hydrangeas to vivid giant heather; clouds rolling in and away again. Ie, it is walking joy.

12km, with 8 of them on the high ground and the rest descending through farmland and the outskirts of Velas. 3 hrs+.

This is moderately demanding walking in high mountains with unpredictable weather. Come prepared.

The routes follow red-marked trails on the Kompass Azores map 1.

Your thoughts are welcome! Please help us by making suggestions and sending photos! Thank you! 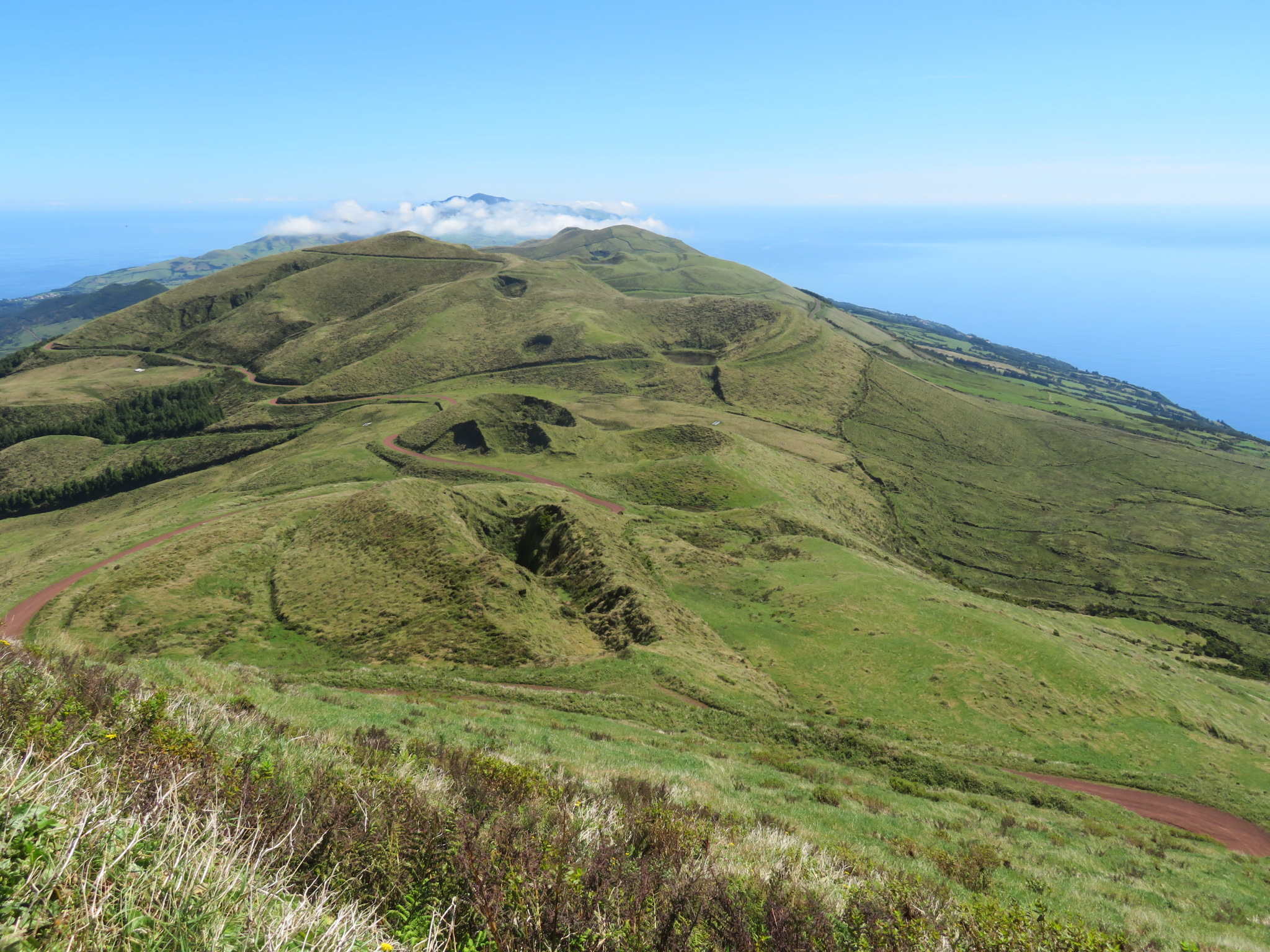 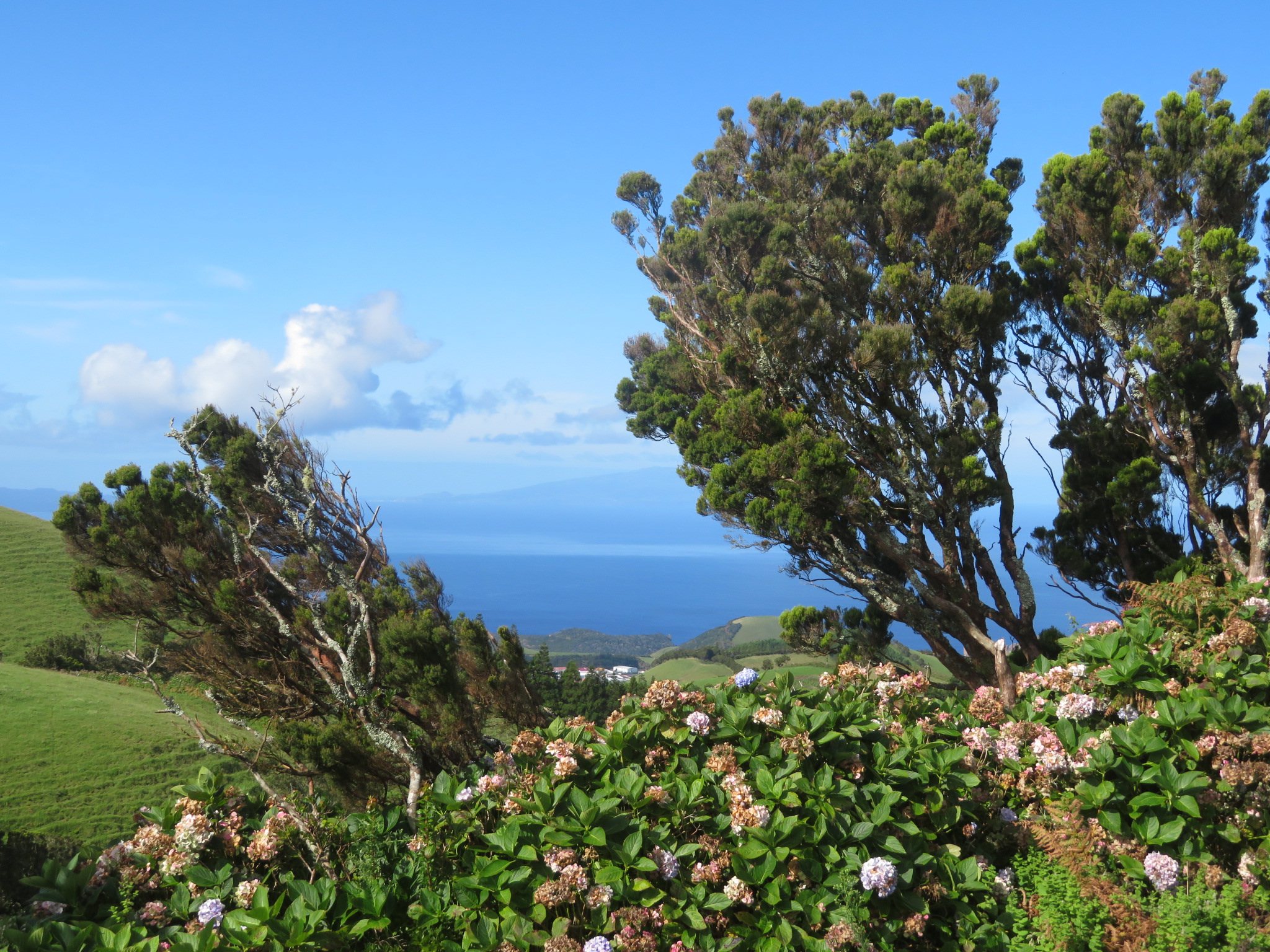 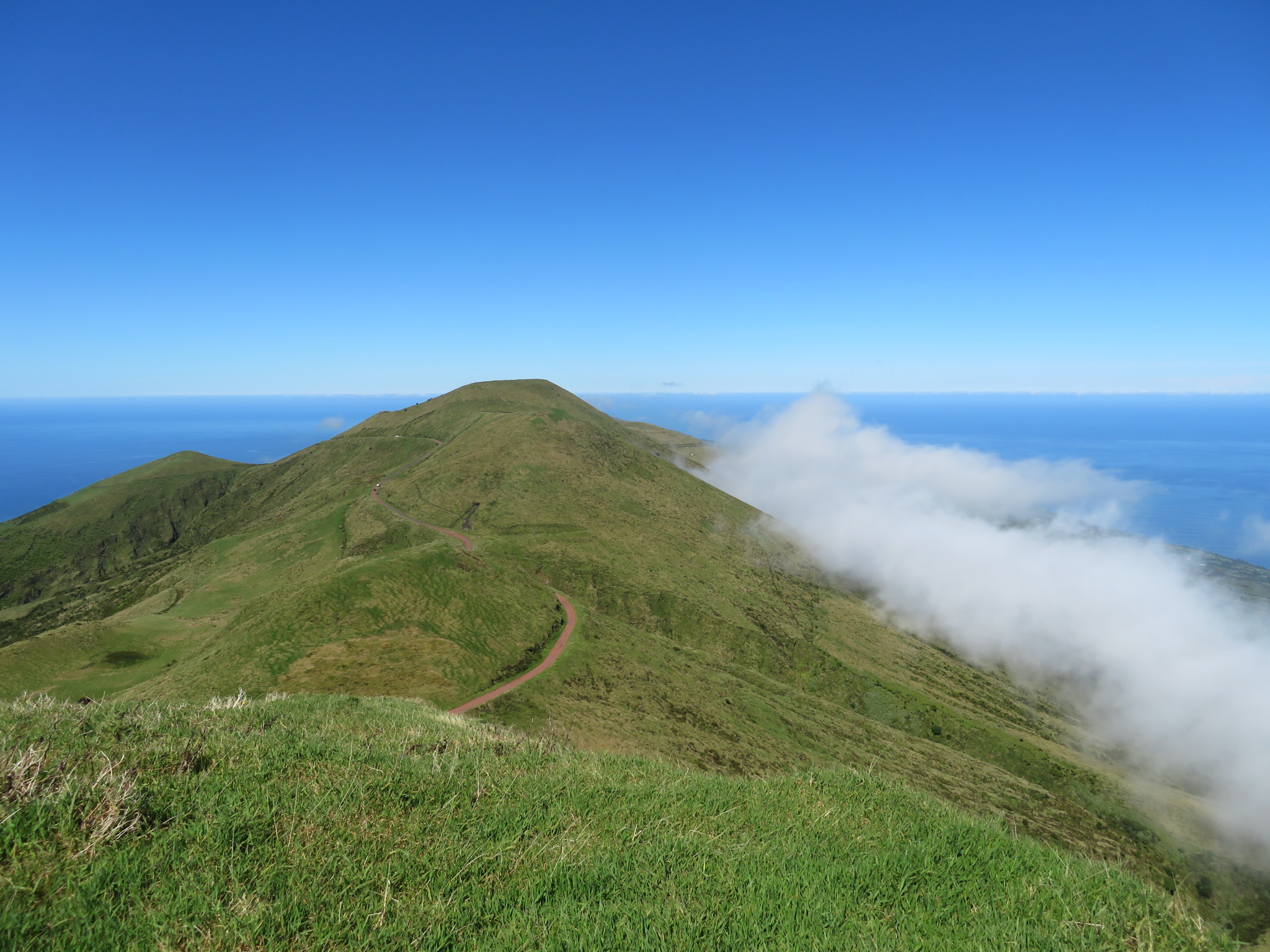