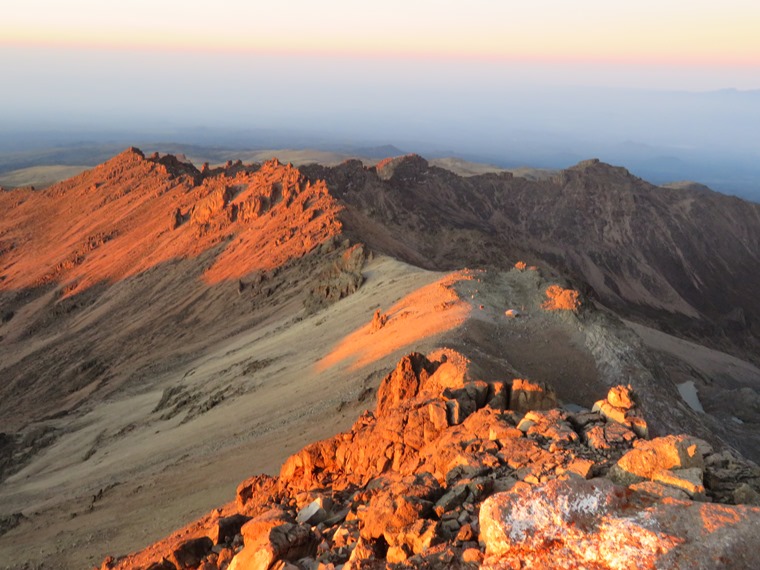 The highest mountain in Kenya (and second-highest in Africa) is a huge stand-alone extinct volcano, last active some 2.6 million years ago. Its mass is some 70km across, and its trekking peak is 4,985m, so it is a whopper in every sense. It is walking and climbing heaven.

There are several outstanding routes, which all reach the Summit Circuit Path, a… er… circuit of the peak area. Walkers should take different routes up/down if they can, thus traversing the mountain and viewing different aspects of his most remarkable place.

All the main ascents treat you to an extraordinarily interesting selection of vegetation zones and landscapes as you ascend. They all start in thick forest, climb out of the treeline into unique moorland and alpine areas. Then it is the rocky drama of the peak area.

The Sirimon Route ascends from the north-west, to Shipton’s camp at around 4,200m, on the Summit Circuit Path.  It used to be less used (partly because it is furthest from Nairobi), but Walkopedia saw far more people on it than on the Chogoria in 2017. This may be because more of the expedition companies are based in Nanyuki.

Walkopedia considers it the best route to ascend because of its relatively gradual altitude gain, to the relatively lower Shipton’s Camp, especially if you do it in 3 days via Liki North Hut rather than direct from Old Moses Hut to Shipton’s Camp.

Day 1: Sirimon Gate to Old Moses Hut or Judmaier camp. 2,650m to 3,300m. on a metalled road all the way, which is a tad dull but makes for easy walking. The forest is a bit scrappy at first, but quite quickly reforms into thicker trees and more mixed undergrowth. The upper forest is rosewood, scattered trees above thick scrub, then you are into the world of heathers, a ravishing variety of colours and forms. And, even better, big views to high green ridges which could be in the Scottish Borders, with the great icy spire of Batian soaring above the skyline ahead. The Old Moses Hut appears on a ridgetop above. All very encouraging. (You can drive to the hut, but this won’t help you acclimatize.)

Day 2: to Liki North Hut. This is a magical day’s walking. You strike up the hill on a good path, with the vast slopes of the moorland leading up to high and very distant looing ridges, with the harsh drama of the peaks protruding above the skyline. The plants are beautiful and fascinating all day. At first you are in quite thick heathery scrub and tussocks.The weirdness increases as cabbage groundsel appear, and senecio. A puff up to a final ridge gets us to a fine view of the deep Liki valley. It’s wide bottom contains a little hut beside an obvious flat campsite. At the valley head are dry, tough, broken crags and cliffs, with a high rough ridge on the far side of the valley, the great peaks behind it. Gorgeous.

Day 3: to Shiptons Camp. Climb to the ridgetop above the Mackinder valley. This is luxurious walking, with no rush to get Shipton’s Camp, indeed an imperative. A long, steady descent, then traverse the valley side some way above the stream, winding through a scattered forest of surreal giant lobelias with broken ridges and spires as a background. The trail up from Old Moses Camp climbs up from the river to join. More lobelia forest, which thins out into a scattering among elegantly arranged tussocks and low Alpine scrub. Cross the stream and start a climb up the far hillside, beyond which you quite suddenly meet the full glory of the high peaks and ridges at close quarters. Heroic. Shortly after, you reach Shipton’s Camp, named after a famous early climber of the great peaks.

Day 4: Ascent of Lenana and start descent. Start early, well wrapped, as it is freezing. This is a long haul, and increasingly exhausting as the altitude gain takes its toll. Our oldish group took 3.5 hours. After a long slog, you gain a saddle on the high ridge which leads to Lenana, where the Chogoria Route and Sirimon meet, and turn right. There are very steep and slippery sections interspersed with slightly easier ones, but it is a long uphill slog in thin air. The eastern horizon becomes faintly red, then more pronouncedly so. You eventually reach the summit of the trekking peak, Lenana, at 4,985m, climb a short fixed ladder and up a final rock wall, and are there. Well done! Time it to get there just before sunrise, as it isn’t somewhere to hang about for long.

Altitude: Mount Kenya is very high and rises quickly, so it poses a classic risk of altitude misery or worse. The slower you ascend, the better chance you have of avoiding the worst. The Sirimon and Naro Moru routes ascend to the Summit Circuit Path at around 4,200m in 2 days, but climbing this fast will really increase the risk. You are well advised to take at least 3 days to get to the peak area. The Chogoria route takes 3 days but ends up substantially higher. It is a very good idea to get to the base area the day before and do an acclimatizing walk that afternoon. If you can, try to “walk high and sleep low”, ie make sure you have made an acclimatization walk above where you will sleep on the way up.

The best weather tends to be in the mornings, so start early!

Walkopedia’s expedition was organised by Tourdust, and we were absolutely delighted. Carefully selected and planned options, very efficient and nice to deal with. Now our partners, and highly recommended.

Have a look at the dreaded TripAdvisor: you may get good, current views on this area.

See our Mount Kenya page for further details on the mountain, photos and practical information.

So, we’re here at last: the Sirimon gate into the Mount Kenya National Park. Here at 2,650m, it is warm and gently breezy, sunny with a few clouds. Our group is cheerful and apparently thoroughly prepared, other than that I was up 5 times with the squits last night. Our guides, and the rest of our support team, seem competent and smiley, so all is looking good.

We stride off up the road at 1.30 – it is metalled all the way to our hut, which is a tad disappointing somehow, but makes for an easy climb. Elija, our leader, sets a deliberately..... 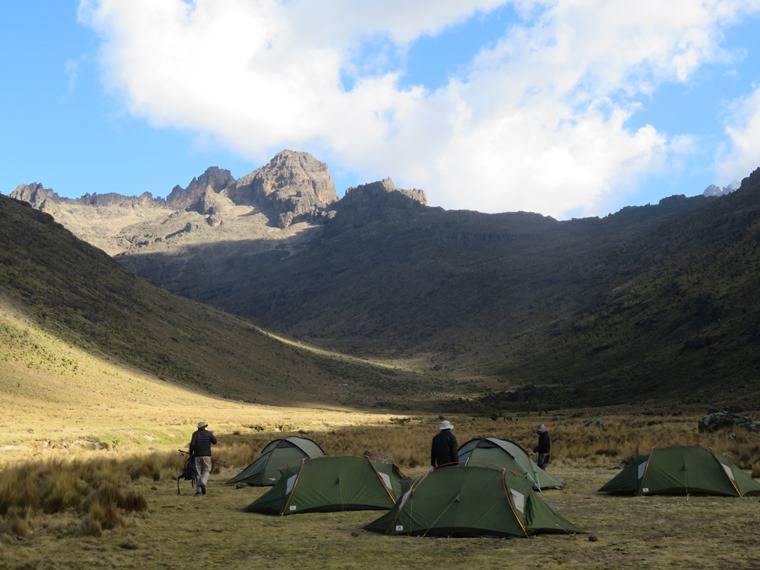 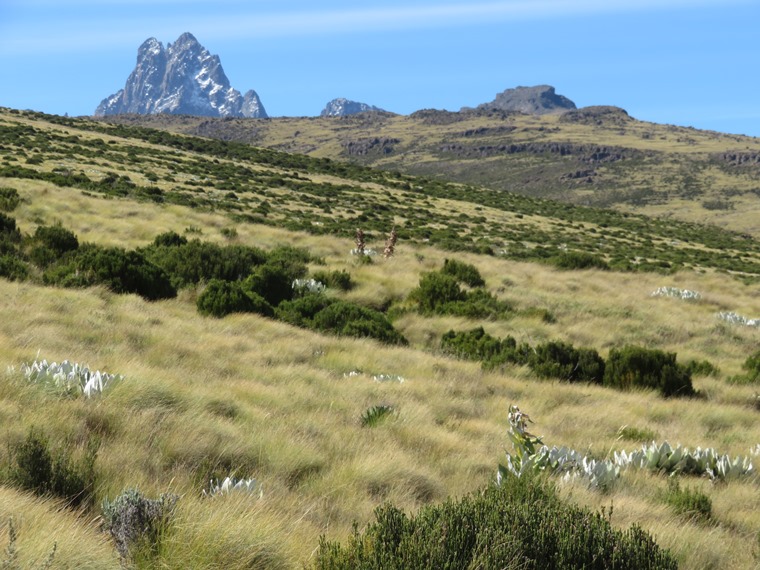 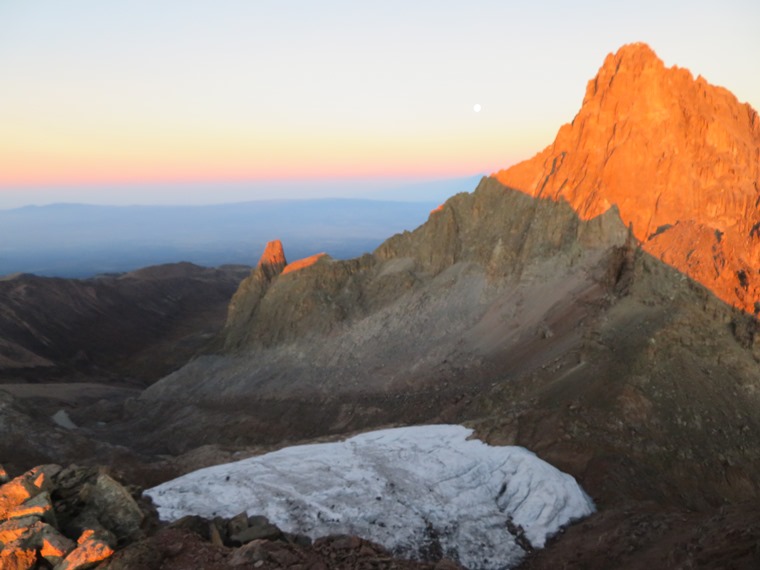