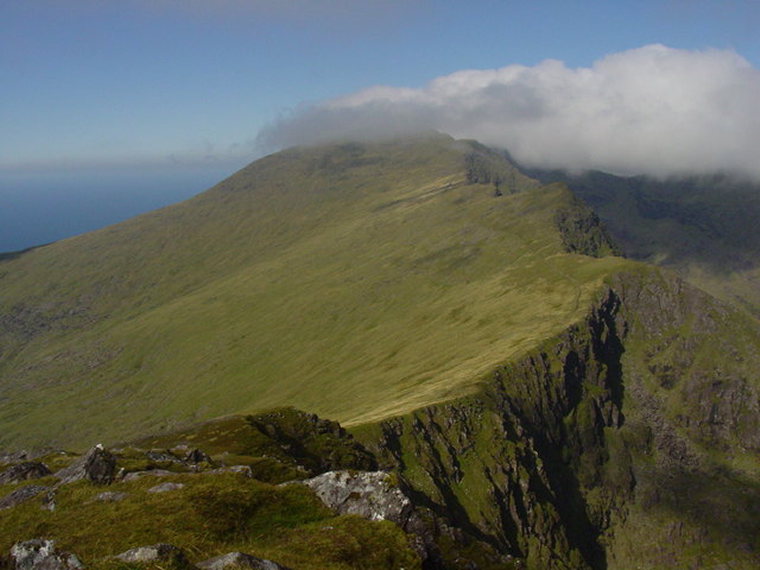 Is the Dingle Peninsula, the northern of south-western Ireland’s peninsulas, the most beautiful of them all? Many would argue that it is – and that is saying something.

Dingle is essentially a one-ridge peninsula for its first half; its western end is more complicated, with knots and excrescences of hills. Its spine of old hills, much of them sandstone, is generally grassier and softer-looking than its harshly magnificent southern counterparts, although the hills break up into some thrilling cliffs and corries, and are edged with some fine sea cliffs in the west. You can see the sea from almost everywhere.

The area competes well with (arguably outdoes) its companion peninsulas for historical interest, particularly its many remarkable examples of early Christian architecture. Western Ireland had a crucial role in the survival and revival of Christianity in Western Europe during the turbulent Dark Ages, and the peninsula is littered with evidence of this. The peninsula is one of Ireland’s main Gaelic-speaking regions.

Dingle is home to swarms of seabirds, common species to rare ones, choughs, corncrakes and hen harriers on land. It is no slouch on the mammalian life either, from the seals of Blasket Island to friendly Fungie (still alive in 2017) and other dolphins in Dingle bay, to whale watching.

Dingle’s pastel-coloured towns are definitely part of its charm.  Dingle town leads the way, and is not to be missed, and other towns like Castlegregory are also worth checking out.

The peninsula boasts some superb walking routes although, as we lament elsewhere, there is no general right of access to the countryside in Ireland, and no traditional footpaths/rights of way, so walking options are not as extensive as they might be. That said, you could easily spend a week here without feeling sated.

Great walks here include the following:

The great long-distance trail here is the Dingle Way. Follow old lanes and tracks through varied scenery on an 8 to 10 day tour of the peninsula: beaches, to clifftops, to sheep-studded fields, to mountains and moorland. Stay in traditional villages, enjoy the local ways and friendliness. Outstanding beauty and interest throughout. There is a section of the Dingle Way near you wherever you are, so you always have a fine day walking option at hand. You can simply head for your nearest stretch but, if you want to walk a few best days, see our Dingle Way page for more details. The best of them all must be the crossing of the northern slopes of Mount Brandon.

The Pilgrims’ Route (Saint’s Road): an 18km unmarked path follows an old pilgrim route to the base of Mount Brandon, a pilgrimage destination for its associations with St Brendan. The trail begins at Ventry beach, then climbs to cross low hills and traverse their flanks, presumably to avoid the once-impassable bogs of the valley bottoms. It takes in Gallarus Oratory and Kilmalkedan church, two of the most important and interesting early Christian sites in Ireland, and other early Christian sites. (see Mount Brandon for the pilgrimage ascent.)

The biggest and finest mountain here is majestic Mount Brandon, Ireland’s 8th highest mountain at 951m and it's second-highest massif. It sits at the north-west of the peninsula, its ridge running for some 7km due south from the huge sea-cliffs to the north, to Mount Brandon itself and on above its dramatic, glacially gouged eastern cliffs and cirques to Brandon Peak and eventually down via Gearhane to the south. With its endless views, its drama, spiritual significance and history, the Brandon ridge is one of Ireland's finest walks and the one in Dingle that Walkopedia covets the most. Brandon has been a place of pilgrimage for centuries, and the most direct and most-used ascent is via the Stations of the Cross route from the west at the end of the Saint’s Road  from Venrty. To the seasoned walker, the climb from Faha above Cloghane to the east is a much better walk, indeed a classic as it climbs through rocky drama to achieve the glorious summit ridge. An outstanding route, if time and energy allow, would be the traverse of the ridge, north to south. Walkopedia’s ultimate would be to climb the Faha route, then walk on along the ridge either north or south.

Great Blasket Island: the largest of the group of islands lying off the end of the peninsula, Ireland's and Europe's westernmost point. It is a long ridge, so makes for gorgeous and easy circuits, be it round the hill above the settlement at the eastern end, or along the peninsula to view castle ruins and endless seabirds. Whatever, you will have huge and wondrous views of sea and the clouds and hills of Dingle and Iveragh. But it is the abandoned settlement, and the vivid history of the islanders, which may leave the most moving and lasting impressions.

Mount Eagle  (404m) above Slea and Dunmore Heads has exceptional views across the Blasket Islands and out to sea, and south across Dingle Bay to the Iveragh Peninsula. It is a reasonably easy walk in from the north.

The short walk out to Clogher Head in the far west rewards with exciting cliffs and big sea views. Nearby Dunmore Head is also a good short walk.

The three low hills of the Three Sisters make for an atmospheric 1hr walk at the north-western end of the peninsula, enjoying big sea views, as does Sybil Point at the southern end of the same formation. Ballydavid Head, just north of Feohanagh, is also an excellent shorter walk.

The Dingle Way’s crossing of the northern slopes of Mount Brandon (Dingle Way​ day 6) is a delightful walk, climbing from the farmland to the west of the northern, seaward end of the wild Mount Brandon ridge, then rambling across its flanks high above the sea before dropping, with gorgeous eastward views, to Brandon Bay.

From Brandon Point at the end of Brandon Bay, up along the cliffs to Sauce Creek to the west, then back on the Dingle Way (Day 6) to near Brandon village.

The Central Massif of the peninsula has a host of excellent walks.

Beenoskee and Stradbally Mountain are key features of the area, and (almost needless to say) have magnificent views. They can be climbed from several directions. Glenteenassig Wood , a remnant of gorgeous old woodland with a pair of lovey lakelets, is a fascinating walking area that should be enjoyed on the way up/down Beenoskee, or in its own right.

Slievanea Ridge: to the west of Beenoskee, Slievanea, Croaghskearda, Windy Gap, and Knocknulanane are all on the same ridge, and salivatory walking, whether individually or together. Slievanea is said to be one of the best walks on the peninsula.

The lake-speckled Mullagh valley, tucked beneath the cliffs and ridges of the Brandon-Slievanea mountains, is a remote and harshly beautiful walking area, reachable by a minor road from Cloghane.

Little Lough Adoon, in its cirque below Slievenalecka and Slievenagower, is home to more than 89 Bronze Age stone structures, and is a beautiful short walk from the Connor Pass road.

Walking in either direction from fabulous Connor Pass, but perhaps best east to Slievanea etc.

Walking on tracks and paths from Ballyduff near Cloghane, across the heart of the peninsula via valleys and a relatively low ridge to Lough Anscaul (or vice versa).

The steep and at times boggy climb from the road south of Camp to the spectacular Caherconree Cliff Fort rewards with history and huge views. From here you can climb on to Caherconree (827m) and on along to Bartregaun (850m) and other peaks which form the spine of the Slieve Mish ridge in the east of the perninsula.

Inch Strand: a superb long sand bar at the head of Dingle Bay.

The South-west gets a lot of rain and wind, plus cloud/fog and occasional winter snow on high ground. Take great care with wayfinding in foggy/mist/cloudy conditions, indeed the mountains aren’t much fun if you won’t be able to see! Be prepared, both mentally and with the right kit.

We would like to give even more info! Please give us your ideas, suggestions, experiences and photos. 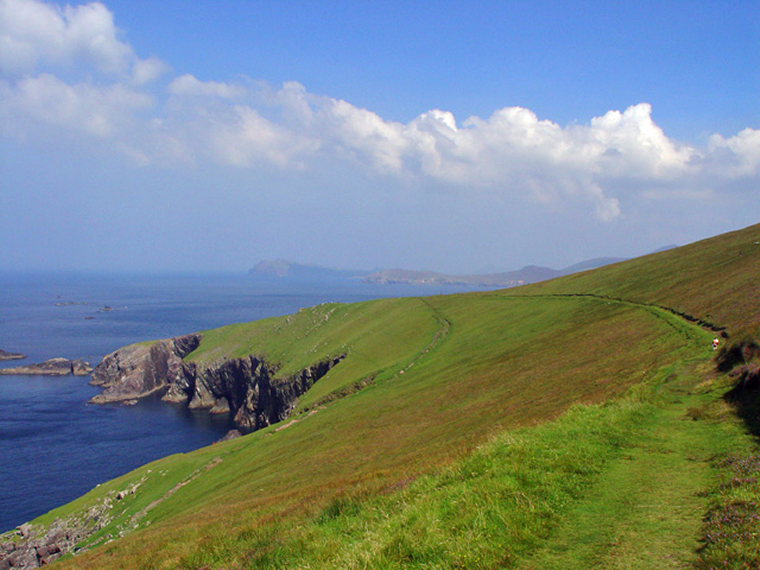 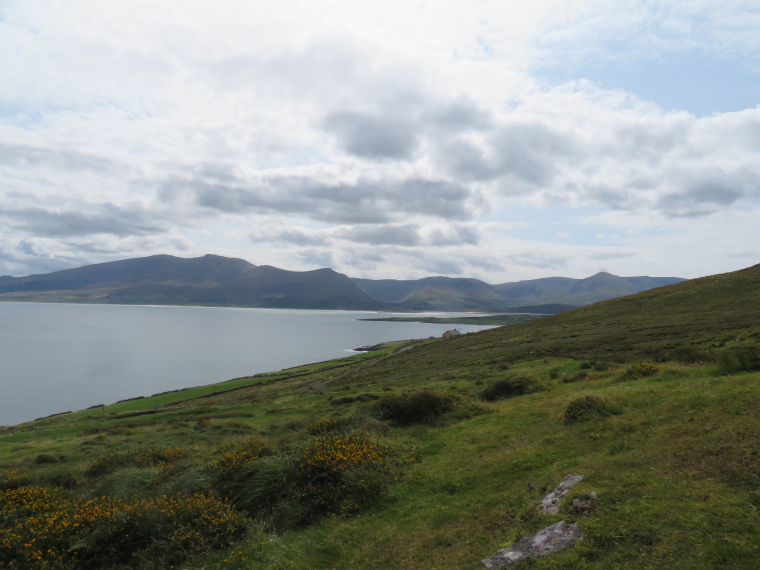 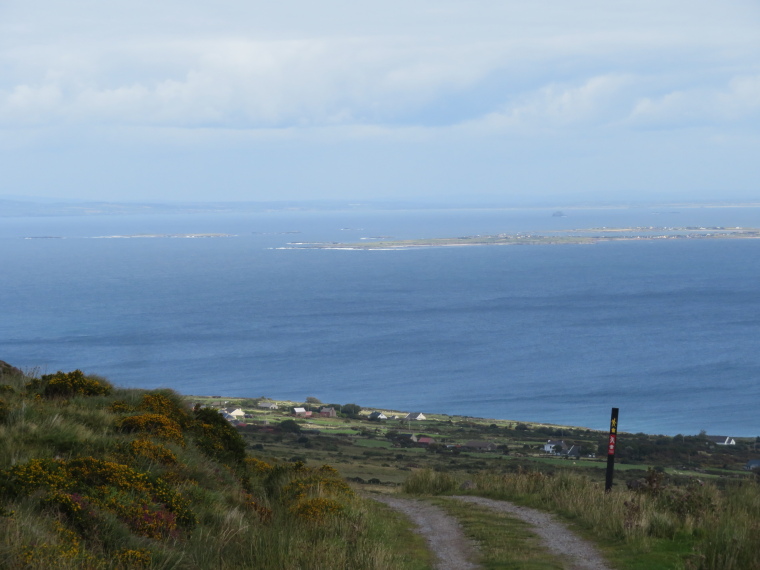