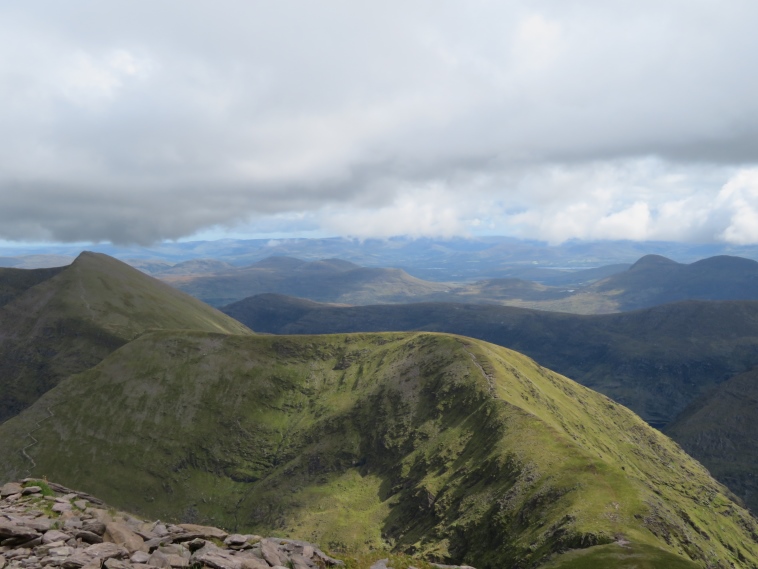 Gorgeous if demanding Carrauntoohil is Ireland’s highest mountain at 1,040m, and the particular challenge in MacGillycuddy’s Reeks  that keen walkers are most likely to tackle. That said, the excitement and beauty of this climb easily outweigh the fact that you won’t be alone.

The outstandingly beautiful Reeks, Ireland’s most famous walking area, are a small massif – essentially one ridge and its offshoots – at the eastern end of the Iveragh Peninsula. From the north, their ramparts are a series of long grassy slopes and crags, nestling dramatic cirques, lakes and tarns; at the heart of the range is the forbidding pinnacle and dark 2,000+ ft cliffs of Carrauntoohil the dramatic spires, cliffs and crags of its neighbours.

Almost everyone has to approach via the Hag’s Glen to the north-east, from Cromin’s Yard centre, as a result of the limited access in Ireland.

The main walking routes (the mountain is popular with climbers, too) are:

You can also approach from the west, a long, steady for 4 or 5 kilometres up the superb narrow ridge to Caher, Ireland’s third highest peak. Walkopedia covets this walk.

Whichever way you climb, the cone of Carrauntoohil itself is an unthrilling but somewhat easier slog up broken rock from the high reeks ridge, compensated by ever-expanding views which become 360 degrees at the peak itself.

Time is needed as you climb to enjoy the superb views out across the great bowl of the upper Hags Glen, with its pair of lakes beneath the huge cliffs of Carrauntoohil and the high Reeks ridges, and on over the gorgeous northern slopes of the little range. From the high ridge, huge views open out to the west and south, of crags, ridges, lakes and eventually glimpses of the sea and the Beara Peninsula.

From the summit, you see the whole area, and miles beyond. To the north, the ridge runs invitingly to the broken crags of the Bones Peak, and on round to the shapely pyramid of Beenkeragh, Ireland’s second-highest peak at 1,010m. To the west is the gorgeous narrow ridge round to Caher and beyond; to the east, is the soft, flat top of Cnoc na Tionne; beyond it, the main Reeks ridge runs gorgeously for several kilometres.

The best descent is the long way, round to Cnoc na Tionne on the main ridge, then down the relatively easy if lengthy Zig-zags back into the Hag’s Glen. The descent is ecstatically beautiful on a good day, the whole way along the ridge and down to the Zig-zags the floor of the Hags Glen, where it become humdrum gorgeous. The drop off Carrauntoohil itself is a bit of a chore, an at times slidey path down a long grey stony slope to the col above the Devil’s Ladder. The climb to Cnoc na Tionne is somewhat boggy.

You can descend Brother O’Shea’s Gulley, but the Devil’s Ladder is no longer recommended.

The final trudge back down the Hag’s Glen goes on a bit, and most will be happy to very happy to ready the roadhead.

See our MacGillycuddy’s Reeks page for information on walks onward from Carrauntoohil: to the north to Bones Peak and on to the shapely pyramid of Beenkeragh, Ireland’s second-highest peak at 1,010m; west along the gorgeous narrow ridge round to Caher; and to the east past Cnoc na Tionne and along the main Reeks ridge, via 9 other peaks over 900m, for perhaps 8 wonderful-looking kilometres.

It is remarkable what hard work a 1,000m mountain can be – a height that many countries would disdain to call a mountain. And the South-west gets a lot of rain, plus cloud/fog and winter snow on high ground. There is little shelter, either from sun or rain. Be prepared, both mentally and with the right kit.

See our MacGillycuddy’s Reeks and Iveragh Peninsula pages for more general and practical information and photos.

We climbed this gorgeous if tough mountain on a fine August day in 2017, of cloud and sunshine with vaporous, Turneresque light after the previous day’s heavy rains.

We approached from the Hags Glen to the north-east, as almost everyone has to as a result of limited access in Ireland, climbing north-east via Brother O’Shea’s Gulley to the north, the most direct and most beautiful route but a steep scramble in places, and descending the long way by Cnoc na Tionne on the main Reeks ridge to the east, then down the relatively easy if lengthy Zig-zags back into the..... 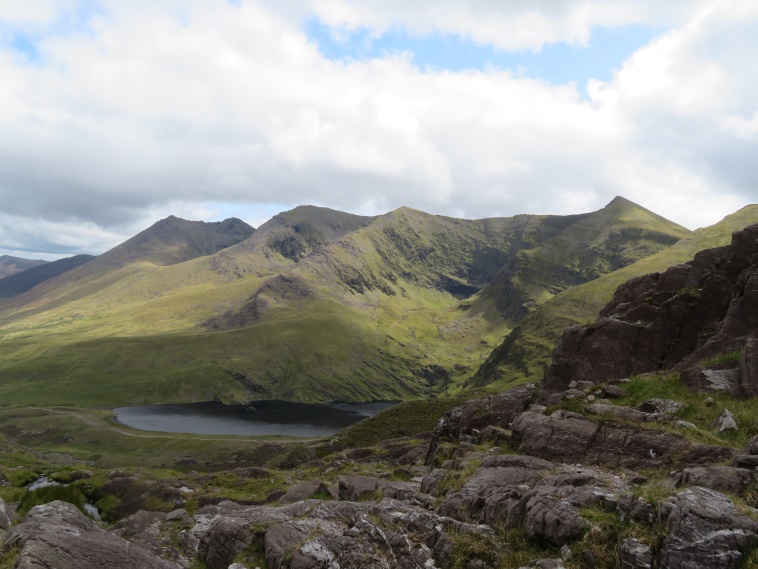 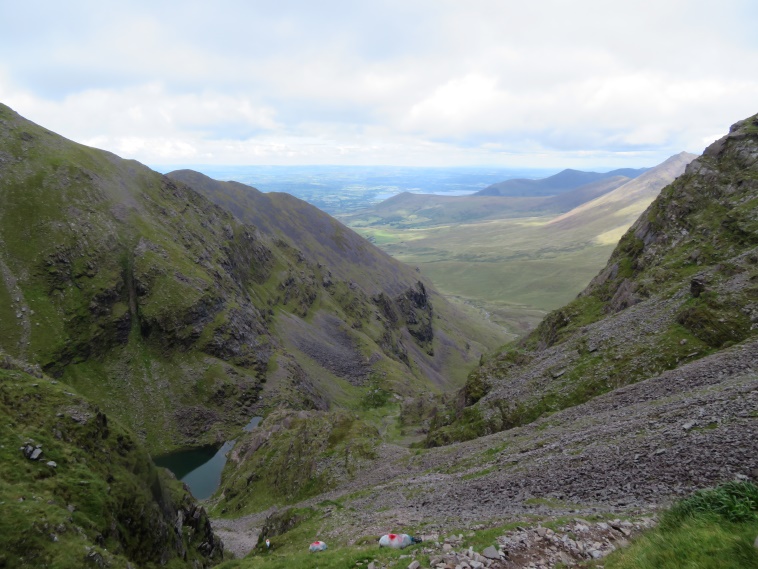 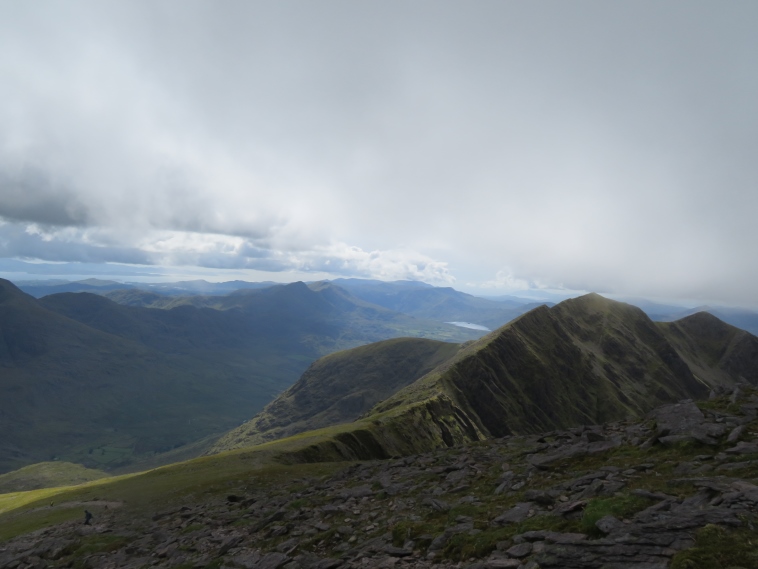