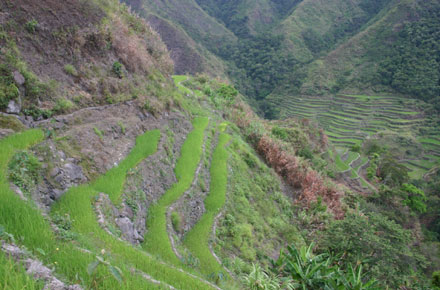 Banuanes rice terraces are beautiful and fascinating: ancient paddies and retaining walls dug from the steep mountainsides of the Cordillera (central mountains) of northern Luzon.

This is a marvellous area, and deservedly a World Heritage Site. These terraces are spread across a number of valleys, where plentiful water and fertile soil have combined to create good rice-growing conditions. The local Ifugao people were fierce warriors (and head hunters), who resisted the Spanish for centuries, so the culture and customs of this remote area has survived remarkably intact. It is probably losing its slow battle against that soft invader, the tourist.

It is not known how the rice or the terracing got here. There are theories about refugee Miao minorities form China. But what is clear is that the terraces are very ancient- said to date back 2,000 years, although rice cultivation probably goes back earlier. When you consider the tools available- or lack of them- the terraces are remarkable feats of engineering and ingenuity.  The courses the water is taken on, and the clever bamboo piping and other devices used, will delight you.

It takes a while to get used to tottering along the rims of the terraces, frequently along narrow concrete paths, but sometimes hopping from rock to rock, always with the deep mud of the paddies on one side and a drop up to 20ft.- on the other.

The view, below the ridge to the north, does not disappoint. A huge bowl in the hillside has been carved into terracing that descends at least a thousand feet, I would guess, to the river in its gorge far below. What is startling is the uniformity of it all.

The walking options are endless, your only constraint will be time.

The consensus is that the terraces of Batad are the finest of all, and they certainly are magnificent. Draped around their huge, steep bowl and seemingly descending a thousand feet or more, they feel like they have been drawn by a single coherent hand rather than evolving over the centuries. Walk back out along the contours down the valley, through alternating forest and terraces. If you can, make time to do a 2-day walk via Batad, Cambulo and Pula. The latter two are further from the roadheads, so less visited. Stay in Cambulo. (The Batad roadhead is a tough, jolting 1hr 20 mins from Banaue.)

The terraces at Hapao are also fabulous, and different in character from Batad, a complex patchwork stretching across a fine valley and up its tributaries. (Getting on for 2 boneshaking hours by road from Banaue.)

There are many other magnificent terraces you can visit: Hungduan, Bangaan, and separate terrace systems further away.

This is tedious to get to (7-10 hrs from Manila), and needs a minium of 4 days including travel.

While it has some grubby charm, Banaue demonstrates some depressing features of tourism- and of prosperity of sorts: charmless half-finished concrete buildings and shacks line the roads for some way out of town. Dont expect too much of it.

Well, it's been tough getting here, so this had better be good.

An early flight from Hong Kong, some complicated shenanigans at Manila airport before we found Ric, our delightful driver- and careful too, a quality that is apparently in short supply around here. 8 hours later, we slid through thick cloud into the rather unprepossessing town square of Banaue. It was actually an interesting drive, a couple of hours of endless charmless Manila, then another couple crossing the lush rice basket of northern Luzon. Then long windy mountain roads, busy little towns, now..... 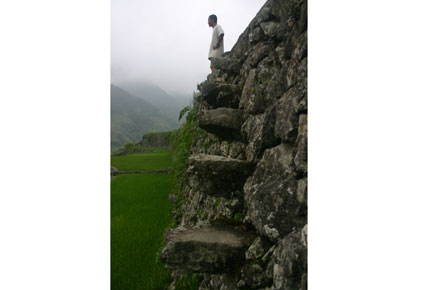 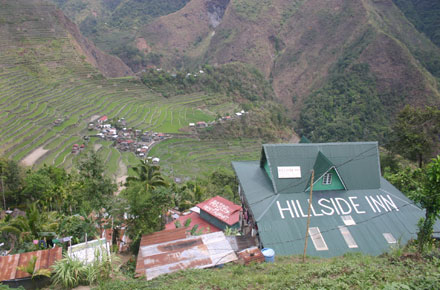 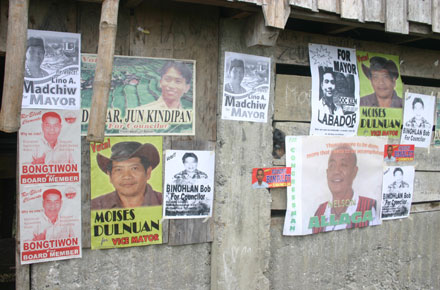 Other great walks in The Philippines