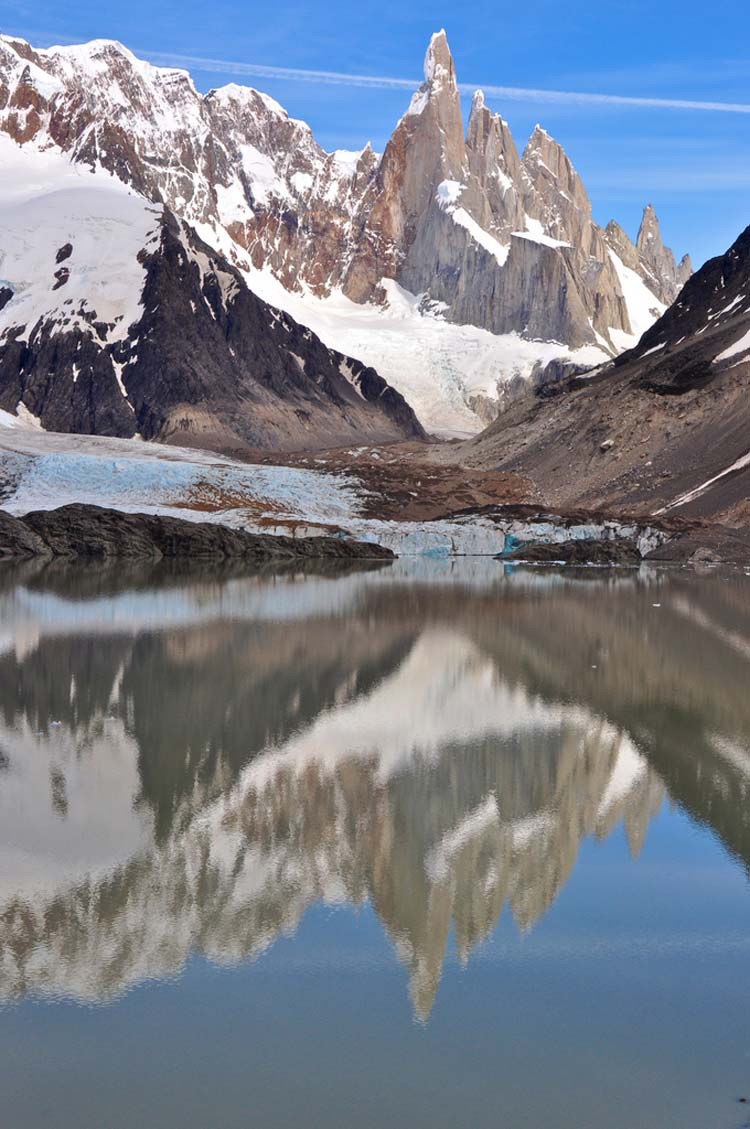 Los Glaciares National Park, host to the fantastic Fitz Roy Massif, is a UNESCO World Heritage Site and, at 8,500sq miles, of a scale matched only by its grandeur. Approximately a third of its area is covered by ice-fields connecting 47 major glaciers, which sets the area apart as the largest continental ice expanse after Antarctica.

The northern extreme of Los Glaciares is characterized by a range of fantastical spikes, of which Mount Fitz Roy is the most enduring image. A series of jagged, monolithic towers of barren granite thrust into the sky; precipitous cliffs plunge down towards frigid glacial tarns and sparse, indigenous flora.

The range's tallest peak, once known as Cerro Chalten (Smoking Mountain), not as a volcano but for the cloud seen to form around its peak, was renamed in 1877 after the captain of the HMS Beagle, Robert Fitzroy. The dramatic mountain was sighted by his 1834 expedition, sailing up the Santa Cruz River to chart the desolate and isolated Patagonian coast: now, it is symbolic of the Santa Cruz province and iconic to thousands of travellers worldwide.

A Fitz Roy trek will typically incorporate both the Fitz Roy and Cerro Torre base camps (thereafter progress becomes exclusively the domain of elite climbers), while trails go on to navigate myriad lakes and outcrops of hardy vegetation, even ascending a few lesser peaks and approaching Viedma Glacier. Hiking here is truly varied.

The national park offers a frozen, beautiful wilderness. The barren slopes of the 3,405m Fitz Roy Massif seem alien and inhospitable. There is no formal round-the-mountains trek, although you can do this if you are happy with doing some serious glacier walking. The hiking is surprisingly easy, often winding through beech forest between viewpoints. Highlights of a Fitz Roy trek include:

Los Glaciares National Park is found in the Santa Cruz province of Argentina, in South America's extreme south. Be prepared for terrible weather: storms are common here, even in summer. The Argentine and Chilean borders detour to pass directly over the summit of Mount Fitzroy, such that Cerro Torre, the region's largest mountain, is actually in disputed territory. The spectacular Torres del Paine National Park is nearby in Chile. 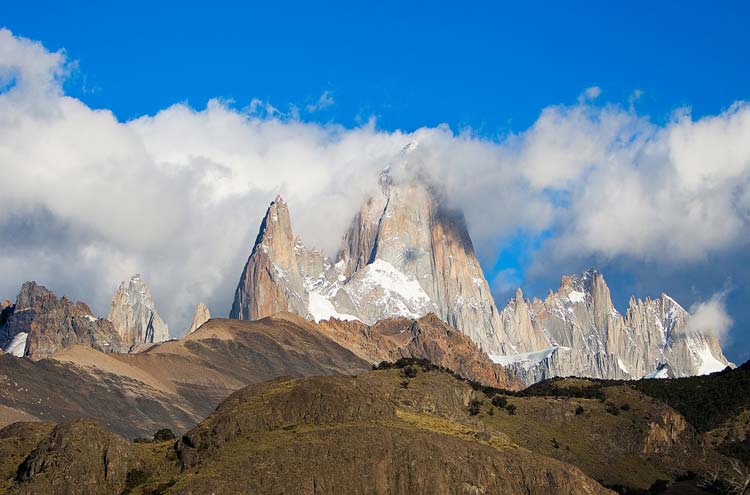 Chapters in Classic Hikes of the World  Peter Potterfield (good practical information) and Trek! The Best Trekking in the World  Claes Grundsten (a more artistic approach, with great photos).

For general books on Patagonia (in its entirety), start with:

In Patagonia  by Bruce Chatwin (2008). An account of Bruce Chatwin's journey through Patagonia, where he searched for almost-forgotten legends, Butch Cassidy's log cabin, and the descendants of Welsh immigrants.

For general guidebooks on Argentina:

Specific maps can be bought locally  fairly easily  from El Calafate and El Chalten. The Intendencia del Parque (ranger station) at El Chalten, across the bridge at the entrance to the town, hands out helpful trekking maps with routes / campsites marked, giving distances and walking times.

Walk Patagonia has a good array of maps in its online catalogue.

The Argentine high season runs through January/February (summer holidays) and July (winter vacation, but not really an option for Fitzroy). During these periods there is substantial internal tourism, and prices in general rise too.

The Patagonian trekking season is November to April. However, with its milder temperatures and long days, throughout Summer (mid December; January; February; part of March) is fine to visit. March is perhaps the best bet, in order to avoid the crowds. For foreign visitors, high season runs from January to March.

Book well ahead if you are coming in high season.

The only thing you can predict is unpredictable weather, even in high Summer. Temperatures typically range from about -2 degrees Celsius to around 20 degrees Celsius (winter  summer); bear in mind that being in the southern hemisphere means seasons here run opposite to those in the northern.

Wind (up to 80km/hr) is always a factor; rain, sleet and snow can follow a day of bright sunshine, even into early summer. Fitz Roy is notorious for terrible storms, potentially consigning you to tent or refuge for days at a time. There is an old saying in both Torres del Paine and Fitz Roy: If you dont like the weather, wait a minute.

Most visitors to Argentina do not need visas and receive free renewable 90-day tourist stamps upon arrival. From December 2009, Argentina has charged a new one-time entrance tax for all visitors holding passports from United States, Canada, and Australia. The total tax is equivalent to the one that Argentines pay to get their visa to travel to these respective countries.

Almost all Fitzroy treks begin in the small hiking village of El Chalten, known as the Trekking Capital of Argentina. The village is approximately 140 miles north of the larger tourist centre of El Calafate, which receives regular flights from Buenos Aires.

Trips take around four hours and cost about US$ 19 one-way. Buses run daily from October until May.

If you come by car, keep your lights on half-beam at all times, and always keep your seatbelt on as some roads are unpaved. Bring a spare tire (in good condition), and extra fuel. Tire socks/winter tires are needed in winter, and some roads can get cut off.

Those on organised expeditions are likely to be transported to and from their arranged start/departure points.

Get accustomed to the routes with this interactive map from Expedia.

Upon arrival in El Chalten, trekkers must check in with the rangers located in the Intendencia (ranger station). Here, you can organize your trekking/climbing registration, which you must keep with you at all times during your trek, and also log your route with them. They will provide you with all appropriate information on trails, campsites, park policy etc, for your visit: Tel (+54) 2962 493004.

Safety and problems: All walks have inherent risks and problems can arise on any walk. Many of the walks featured on this website involve significant risks and possible problems. This website cannot, does not purport to, identify all actual or potential risks, dangers and problems that may relate to a walk or a country. Any person who is considering undertaking this walk should do careful research and make their own assessment of the risks, dangers and possible problems involved. They should also go to Important information for further important information.

You can walk independently here, but you will need to be self-sufficient, so come fully prepared. Alternatively you can hire all necessary equipment from El Chalten town, but note that most services close during low season (April-October).

You must meet the park rangers at the Intendencia (ranger station) upon arrival in El Chalten, to complete your trekking/climbing registration and log your intended route.

Many people form or join supported expeditions. Given the remoteness of the region and difficulty of getting supplies, many will prefer to do it this way, and traveling here with a knowledgeable guide has real advantages. Expedition organisers include:

Your accommodation can help organize any tours in situ, if required.

There are campsites en route, and the maps handed out by the Intendencia mark their locations clearly.

El Chalten Tourist Info has a comprehensive list of accommodation available in the area, from cabins and cottages to bed & breakfasts (not available during your hike). Please note that most services and some accommodation close during low season, around April-October time.

You can also stay in a traditional estancia (ranch), such as:

Of the hotels available in the area:

Patagonia has a huge variety of great walks, in both Chile and Argentina.

There is likely to be a good walk within range wherever you may be. In Patagonia: 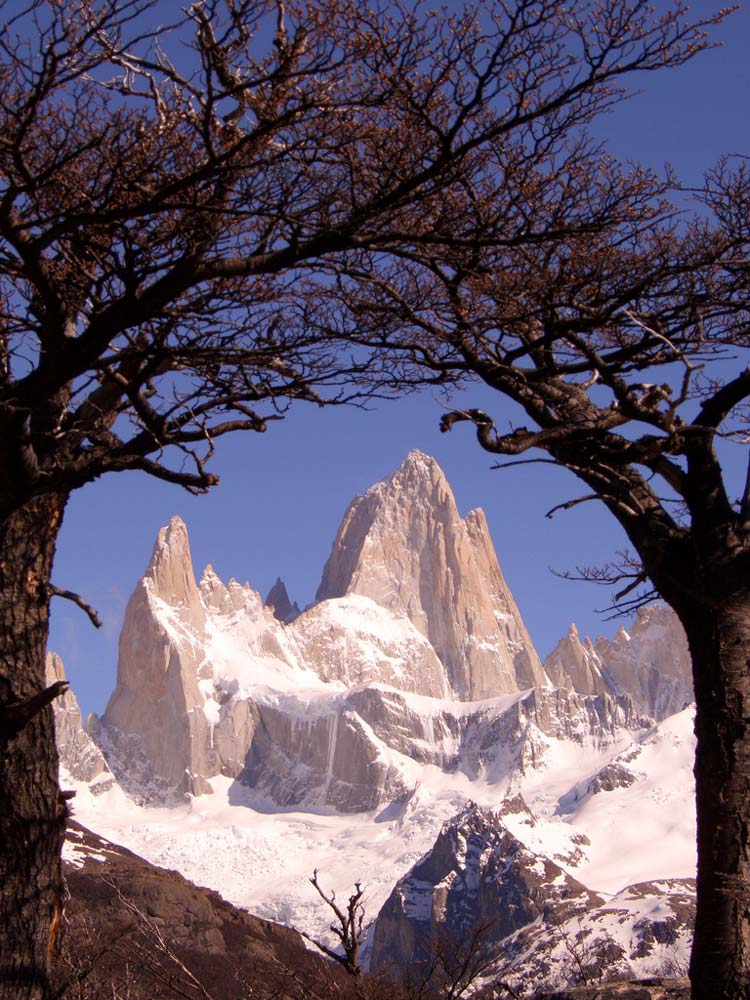 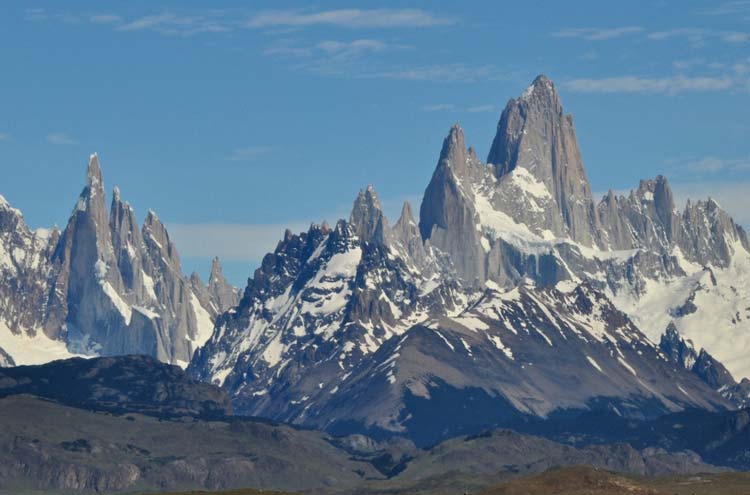